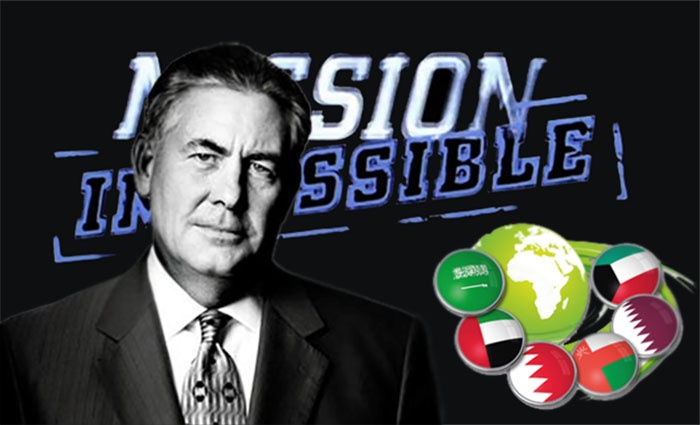 Rather than resolving the Gulf crisis, the US may be setting the stage for further escalation

US Secretary of State Rex Tillerson’s belated intervention in the Gulf crisis – preceded by that of British Foreign Secretary Boris Johnson – implies that all other mediation efforts have reached a dead-end, and that a resolution is no longer up to the Gulf states alone, as all sides used to insist.

We do not know what magic formula Tillerson will be proposing to end the standoff between the Saudi/UAE/Egypt/Bahrain alliance and Qatar during his four-day Gulf tour.

Nor do we know why he waited a whole month before embarking on it.

All we know, for sure, is that the US and President Donald Trump played a big part in stoking the crisis — by publicly accusing Qatar of supporting and funding terrorism at the highest level, and stressing in one of Trump’s tweets the need for it to be punished.

There are various explanations for why Washington dragged its feet for a month, during which the White House and State Department appeared to adopt divergent positions.

The most plausible is that the US administration was giving the four-way anti-Qatar alliance a green light to cut Qatar down to size and bring it to its knees, and ultimately to engineer regime-change in Doha if it came to that.

But these countries did not seize on the opportunity to translate their threats into military action on the ground.

They thought that severing relations and imposing an air, land and sea blockade would be enough to force Qatar to back down and accept their 13 demands. But that belief proved to be misplaced.

This theory, which is widely held in Western policy circles, was reinforced by Qatari Foreign Minister Muhammad bin-Abderrahman Al Thani when he said that the rapid deployment of Turkish military forces and equipment to Doha had a major role in in deterring a military intervention that was being planned.

The Saudi-led alliance has now withdrawn its demands after the expiry of both of its ultimatums to Qatar – the original one and the 48-hour extension.

It has declared that these are no longer up for discussion, nor even for implementation, due to Qatar’s negative response.

This means that the Kuwaiti mediation has officially been buried, and that further escalator measures — economic and maybe even military – can be expected, unless one side or the other capitulates.

And there is absolutely no sign of either climbing down.

On Monday, the Qatari foreign minister reaffirmed the position his country has taken since the outset of the crisis: that it will not comply with any demands that are inconsistent with international law or any measures that apply to it alone, and that it wants a solution applicable to all sides.

He went on to lob the ‘terrorist’ ball back into the opposing court, noting that there were also Saudi and UAE nationals accused of backing and funding terrorism.

Meanwhile, UAE Minister of State Anwar Gargash – who has become the de facto spokesman of the anti-Qatar campaign with his many tweets and media interviews about the crisis — effectively slammed the door shut to US or British mediation.

He tweeted: ‘No diplomatic effort or good offices will succeed unless reason, maturity and realism prevail in Doha’.

He added: ‘Hiding behind the jargon of sovereignty, and denial, will prolong the crisis rather than shortening it’.

With both sides making such uncompromising statements, Western mediation efforts would seem to stand little to no chance of succeeding.

Tillerson’s efforts are unlikely to fare any better than those of Kuwait’s Sheikh Sabah Al-Ahmad, whose wisdom has been extolled by all sides.

If either the Qataris or their adversaries/accusers had been minded to make concessions, they would have done so to the Kuwaiti emir who is regarded with respect as the Gulf’s elder statesman.

It would not be surprising or far-fetched to find that Trump dispatched his chief diplomat to the Gulf on a mission aimed at failing rather than succeeding.

That would justify moving on to phase three of the campaign: that of bringing about regime-change in Doha.

Several senior Qataris, including the foreign minister, have indicated that they are convinced this is the ultimate objective, while stressing their resolve to defend their country and its sovereignty.

So could we be witnessing the calm that precedes a second ‘decisive storm’, not against Yemen this time, but within the Gulf itself, targeting a fellow Gulf monarchy?

We will have to wait for Tillerson to complete his mission, pack his bags and return to Washington before providing an answer.

But the question is well worth asking.