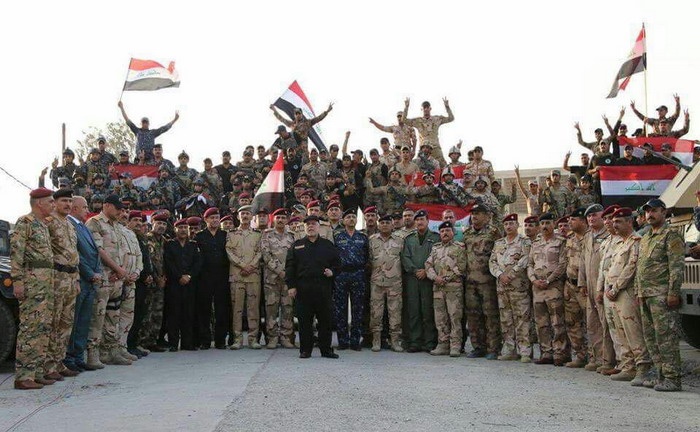 There is much to fear in the absence of a proper plan by the Iraqi government and its allies for the post-IS phase
Celebrations have officially begun to mark the recapture of Mosul from Islamic State (IS)/Daesh.

The group’s formidable defenses finally broke down in the face of an overwhelming nine-month offensive by the Iraqi army and US-led allied forces which featured bloody battles and caused the near-total destruction of large parts of the historic city.

The celebrations are due to last for more than a week.

But few of Mosul’ inhabitants, over half of whom are displaced, are likely to take part. There is scarcely a family which has not lost a loved one or more.

The IS/Daesh Caliphate in Iraq did not last long, just three years from the day it was proclaimed from the pulpit of the Grand Nouri Mosque.

Even this historic building was reduced to rubble, its famous leaning minaret leveled with its foundations to proclaim the end of one era and the start of another.

The war against IS/Daesh in Mosul is officially over, but it may spawn other wars which could prove longer and fiercer.

Worrying signs can already be seen of a post-war political vacuum, and of the Iraqi government’s inability to set an example, provide better services and begin reconstruction.

Electricity has still not been restored to the eastern districts of Mosul that were liberated six months ago.

Schoolteachers who returned to their jobs there remain unpaid, and the city’s famous university has been turned into a ruin.

The intensity of the fear instilled by the IS/Daesh monster has receded, but Iraqis have growing cause to be fearful for their country’s future.

These legitimate fears can be summed up in the following points:

1. Fighting and uprooting IS/Daesh was the ‘cement’ that held together the 60-member coalition and all or most of the Iraqi and regional players involved in the anti-IS campaign.

This no longer applies.

The bond of unity and common cause has dissolved.

So what will the fate of this coalition be, and will we witness clashes of a different nature?

2. Iraqi Kurdish chief Masoud Barzani has announced the holding of a referendum on independence on September 1st, less than two months from now, and wants to incorporate oil-rich Kirkuk into this new state as its economic capital.

So will this trigger the start of the dismemberment and division of Iraq along ethnic and sectarians lines?

And will an even bloodier Arab-Kurdish war ensue?

3. It is undeniable that one powerful party in Iraq has achieved victory over a different social and political component.

So will the victorious side act vengefully and seek to marginalize the other? Or will it learn lessons from the Americans’ mistakes after they ‘liberated’ Iraq, and take serious steps to promote coexistence, dialogue, equality, social justice and a unifying and inclusive Iraqi national identity?

4. The rehabilitation of Mosul alone will cost billions of dollars, and the reconstruction of Iraq requires at least $60 billion according to the most conservative estimates.

But Iraq’s state coffers are empty due to corruption and theft.

So where will the money come from? And what concessions and conditions will potential donors demand in exchange for their funds?

5. What will happen to the foreign forces present on Iraq soil — including 6,000 US personnel, 2,000 Turkish troops at Baashiqa camp, and thousands of Iranian fighters?

All came to the country on the pretext of liberating Mosul from IS/Daesh.

Now that this has been achieved will they leave? Or will they dig in and prepare for more wars: to defend the state of Kurdistan as a reward for the Kurdish peshmerga’s contribution to the anti-IS campaign, for example?

Or to counter alleged Turkish designs on Mosul? Or to bolster the proposed new Sunni entity in the area?

These concerns may contrast with the displays of joy, dancing and fireworks at the victory celebrations.

It is right and legitimate to celebrate.

But it is also right to sound a note of caution and warning in the absence of any proper and well-considered plan by the Iraqi government and its allies for the post-Mosul period.

IS/Daesh will not disappear with the disappearance of its ‘caliphate’ in Mosul and, in due course, Al-Raqqa.

It subsequent strength or weakness will depend on how the Iraqi government and its backers address the above five points.

The group has three options in the coming period.

First, IS/Daesh could dissolve itself as an organization and concede defeat.

This is highly far-fetched, given how Al-Qaeda’s parent organization persisted after the US occupation of its Afghan haven in 2001.

Secondly, it could concentrate on terrorist action and expand in that way, exacting revenge against all the powers that brought down its caliphate state.

This is its likeliest course of action, and its hit-list will most probably be topped by the US, Europe and their Arab allies for the foreseeable future.

Third, the group’s core members and surviving leaders could relocate to its ‘provinces’ in lawless regions or failed sates — such as Yemen, Afghanistan, Libya, Egypt, the Sahel or Somalia, as well as other parts of in Iraq and Syria – to re-establish its headquarters and use these locations as new hubs and launching-pads.

There has been evidence of this happening in Afghanistan, Yemen and southern Thailand the Philippines.

IS/Daesh may have failed to preserve its caliphate, but it has sustained the power of its violent and extreme ideology and managed to disseminate it widely among its targeted constituencies of disillusioned youth and marginalized communities.

This must be taken into account by any long-term strategy to confront the group, though it is doubtful that such a strategy exists.

The victory celebrations will no doubt continue.

The recovery of Mosul was indeed a big and hard-won achievement which entailed huge sacrifices, especially in human lives and suffering.

We can only hope, despite all doubts and fears, to see the dawning of a new Iraq, one that is different to the ‘American Iraq’ and is characterized by equality, justice, coexistence, stability and good government.