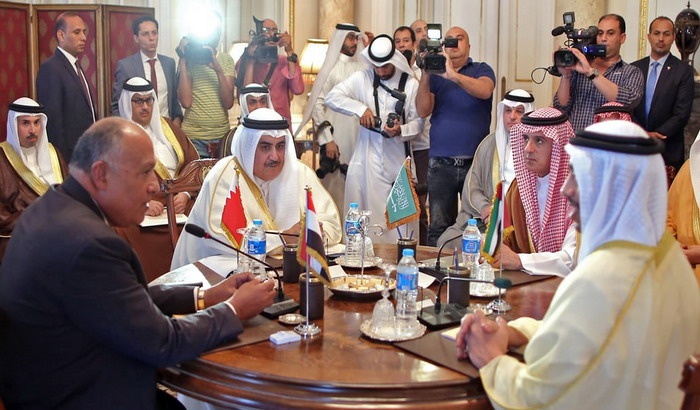 Military or a Security Intervention (or both) is the more likely outcome of the Gulf crises.

We watched the press conference held by the foreign ministers of Qatar’s four adversaries after a meeting in Cairo that was meant to ‘coordinate’ their next steps, since the 12-day period granted to Qatar to respond to their demands has passed.

Before attempting an in-depth analysis of the positions expressed at this press conference and trying to envisage what future steps may be taken, a number of basic points may be worth considering:

– The four ministers agreed that Qatar’s response to their demands was negative, lacking in substance and free of any concessions, as Egyptian Foreign Minister Sameh Shoukry put it.

And this means that Kuwait’s mediation effort is now over, and that we are heading towards further escalation.

– Mr. Shoukry resorted to a ‘hawkish’ tone and some very sharp words that reflect the nature of the expected measures.

For example, he said that there was no alternative but to be ‘decisive’ and ‘resolute’ in ‘deterring’ all those who back terrorism; that there will be no leniency towards Qatar’s role; and that the four countries are not merely making accusations but are basing themselves on evidence and documented facts.

So are we facing a new Decisive Storm against Qatar [akin to the Saudi-led Yemen offensive against the Houthis]?

– Qatar’s political and economic boycott will continue until it backs down from its positions and complies with all the commitments it made in the [May 2017] Riyadh agreement.

The new measures will be carefully studied and consultations regarding them will continue.

In other words, Qatar must accept all of the 13 demands put to it and raise the white flag of unconditional surrender.

– Freezing Qatar’s membership in the GCC (Gulf Cooperation Council) will be left to the next meeting, without specifying its level of representation.

Will this issue be discussed at an urgent meeting of GCC foreign ministers within days or weeks, or will it be discussed at the annual GCC summit to be held in December?

– Bahraini Foreign Minister Sheikh Khaled Al Khalifa said that the charge of terrorism would not only be leveled against Muslim Brotherhood members and leaders, but all those who sympathize with them; and that they will all be held to account on the same charges.

This means that anyone who does not support the four governments and who criticizes their measures against the Brotherhood – especially the detention and arrest of Brotherhood members – could find themself in the dock, even if they are liberal or secular.

Should this law be implemented, it may require millions of people to be detained and the establishment of tens (if not hundreds) of thousands of courts so as to meet its needs.

– Emirati Foreign Minister Sheikh ‘Abdullah bin Zayed confirmed that the four states will not ask the international community to punish Qatar, but will resort to whatever measures they believe will comply with international law and protect their interests.

And this means that all options are on the table, including that of military intervention.

– All four ministers repeated the same phrases and charges regarding Qatar’s involvement, not only in backing terrorism but in financing it, consolidating and inciting to it, and spreading hatred.

They insisted that all these practices should cease immediately, and that the required measures should be taken if Qatar should fail to comply and do what it must.

While he accused Iran of being the main terrorist country in the world, adding that it was only natural for it to support Qatar because it backs terrorism, he described Turkey’s position as ‘neutral’.

Was this distinction based on sectarian considerations, namely that Iran is ‘Shiite’ while Turkey is ‘Sunni’?

Or was it wagering on an imminent change in Turkey’s position in support of Qatar?

– The Cairo meeting’s importance not only stems from the urgency with which it was held in the Egyptian and not any Gulf capital just one day after the two periods of grace granted to Qatar expired.

It also stems from the emergence of an Egyptian/Gulf ‘grouping’ that could develop into a ‘regional council’ and replace the GCC (and perhaps the Arab League as well), similar to the ‘Damascus Declaration’ group that was formed by the Arab members of the U.S.-led coalition force that was created after the 1990 Kuwait crisis.

In order to have a complete and objective reading of this meeting and its results, as well as the positions expressed by the four states’ foreign ministers, we should pause and consider two important complementary and directly related developments:

– The first has to do with the meeting held in the Egyptian capital as well, by the heads of the Saudi, Egyptian, Emirati, and Bahraini intelligence agencies shortly before that of the same states’ foreign ministers.

– The second has to do with U.S. President Donald Trump’s phone call to his Egyptian counterpart ‘Abdelfattah Al Sissi.

President Trump stressed that all countries must abide by the commitments they made at the May Riyadh summit to cease financing terrorism and combat ‘extremist ideologies’.

He also ‘called on all parties to negotiate in a constructive manner in order to resolve the conflict with Qatar’.

We do not believe that the leaders of the four states’ intelligence agencies met in Cairo to discuss the lethal heat-wave that is sweeping over the Middle East.

They must have convened so as to ‘conspire’ and draft plans for a potential security and military intervention in Qatar, and how to sow the seeds of division within its ruling family, creating disturbances deep inside the country.

In fact, they may go so far as to carry out bombings or as to incite waves of popular protest in Qatar, recruiting opposition figures from inside and outside the country, and to arrange a domestic coup that will elicit an external military intervention to support it.

The published details of the phone call between the Egyptian and U.S. presidents contain much that is ambiguous.

On the one hand, Trump calls on Qatar to combat terrorism and abide by the Riyadh summit’s decisions; he then says that he has asked for a negotiated solution of the crisis.

We still believe that President Trump backs the four states position and their wish to bring Qatar to its knees, place it under foreign suzerainty, and perhaps change its regime.

Had he sought anything else, he would have sent his Secretary of State Rex Tillerson on a shuttle mission to the capitals of the five countries concerned, and he could have stayed in the region until the crisis had been De-fused.

But are we demanding too much in this case?

We are disturbed and intrigued less by the foreign ministers’ meeting in Cairo as much as we are by the meeting between their heads of intelligence.

For in dark rooms behind closed doors, these are the masters of conspiracies and laying plans for all sorts of interventions.

They are, in fact, the true rulers; and when not so, they are still the most influential party to the decision-making process in their countries.

“In light of the hard line adopted by both sides to the crisis, and Qatar’s refusal to back down, its insistence on its positions, and rejecting suzerainty despite the growing pressures and despite the continuing political and economic blockade imposed on it, we believe that a military or a security intervention (or both) is the more likely outcome.