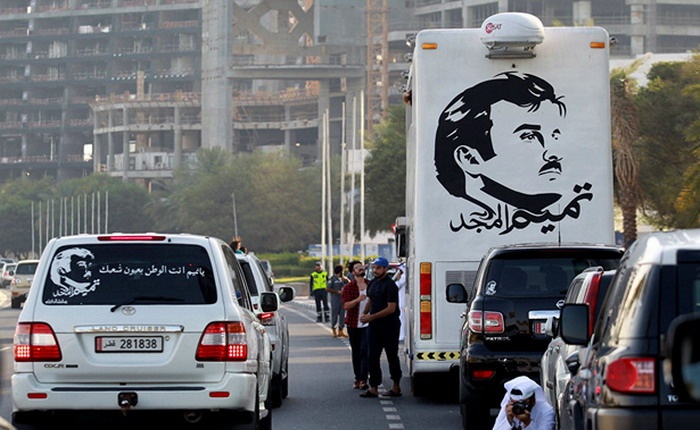 At dusk, young Qataris gather outside the house of a ruling family member in Doha to sign a portrait of Qatar’s emir mounted on a giant billboard.

A month of sanctions imposed on Qatar by Egypt and Arab neighbors that have cut ties and accused Doha of supporting militants has galvanized patriotic feelings among Qataris, who number 300,000, as well as fear about the possibility of military escalation.

While Doha denies the charges and there are no signs the standoff will spiral into military confrontation, the crisis has bolstered nationalist support for the 37-year-old ruler of the world’s wealthiest country per capita.

«We will go to the streets and fight for him [Sheikh Tamim]», said Ahmed Al-Kuwari, a 32-year-old engineer.

Local media say that hundreds of men are signing up for the military, as others deliver jibes at Arab rulers on social media and rail against «fake news» they say some Arab media outlets are spreading to divide them.

After an announcement on Wednesday by Saudi Arabia, Bahrain, Egypt and the United Arab Emirates that their boycott of the tiny Gulf Arab state would continue, playful Qataris shared on Twitter photoshopped images ridiculing officials from those countries.

Others shared a clip of the UAE foreign minister berating Qatar for supporting terrorism followed by a clip of Sheikh Tamim drinking a cup of tea and laughing.

Accustomed to luxurious lives and cushy government jobs, thousands of Qataris are cut off from relatives as well as properties they own in the UAE and Bahrain.

Some say they won’t return even if the dispute is settled.

Amira, a Moroccan curator at a Doha fashion house that imports designs from the UAE, says the dispute is affecting the decisions of her customers.

«People are starting to ask where the fabrics come from», she said.

«Last week a Qatari woman found out a dress was from the UAE.

She said ‘get it away from me’».
There is broad support for Sheikh Tamim among young people who associate their wealth with his family’s rule.

Officials from the four countries have also ruled out any plans to try to change the ruler or use force in the crisis.

«No one in the family is worried about him stepping down», said Haya Alwaleed Al-Thani, a student at Doha’s Georgetown university and a member of Qatar’s ruling family.

He has treated people with equality».

The Al-Thani tribal rulers of Qatar, a small peninsular country protruding into the Gulf with a population of 2.7 million, most of them foreign workers, have been rattled in the last few decades by internal palace coups or threatened intervention by Saudi Arabia.

But the discovery of vast liquefied natural gas reserves in the 1970s that crowned Doha with skyscrapers and ushered in cradle-to-grave welfare has brought stability and lured in foreign investors.

For older Qataris who knew leaner years and witnessed wars in the Gulf including Iraq’s 1990 invasion of Kuwait, the feud is more troubling.

«During the Kuwait invasion my relatives barricaded their windows and stayed inside.

They are scared of that happening again», said Haya, the Doha student.

Others fear enmity between Gulf states could linger on.

«After this conflict, Sheikh Tamim can’t easily deal with the Gulf nor America», said Ahmed, a civil servant who declined to give his second name.