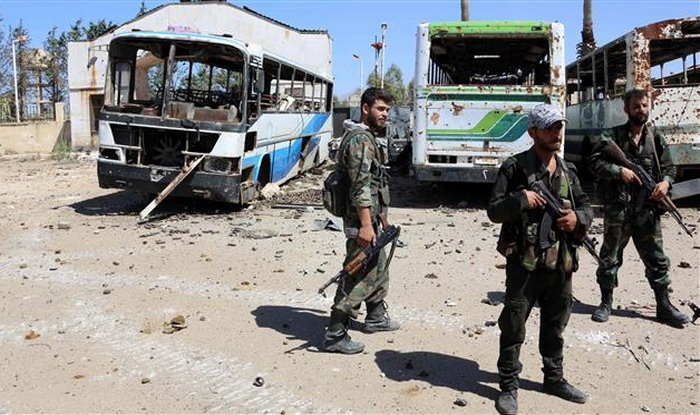 The Syrian army said on Monday it would suspend combat operations in southern Syria until Thursday ahead of a new round of peace talks in the Kazakh capital Astana, but rebels said the army had already violated the ceasefire by striking areas under their control.

The army general command said in a statement carried on state television the ceasefire began at midday (0900 GMT) on Sunday and was to support «reconciliation efforts», in the second such unilateral ceasefire in the last two weeks.

Hours after the announcement, rebels and witnesses said Syrian jets resumed dropping barrel bombs — drums or cylinders packed with explosives and shrapnel that cause indiscriminate destruction on the ground — on rebel-held areas in the southern border city of Deraa, the town of Naima to its east and countryside near the provincial city.

There was no immediate comment from the army on the rebel allegations.

Russian-sponsored talks are planned in Astana on Tuesday. The last round of Astana talks in May led to the signing of an agreement between Iran, Russia and Turkey to create four de-escalation zones in Syria, one of which is in the south.

But the Syrian army has in recent months escalated its strikes in Daraa in a campaign to reach the border with Jordan and wrest full control of the city.

Hostilities have expanded to the border province of Quneitra along the Israeli-occupied Golan Heights where rebels are waging an offensive against the army and Iranian-backed militias in the strategic border area.

A rebel official said the latest ceasefire was a ploy to drag the opposition to Astana.

The rebel side has already expressed deep misgivings about the de-escalation zones, which they say benefit the Syrian army by freeing forces to allow them to make territorial gains elsewhere.

The Syrian opposition and rebel groups accuse Russia of abetting the Syrian army in its major offensive to wrest full control of Daraa.

Some rebel factions are expected to be absent from the Astana talks because of what many see as Russia’s unwillingness to end air strikes and its failure to get the Syrian army and Iranian backed militias to abide by a ceasefire, a rebel source said.

«This ceasefire is an attempt by the Russians and the regime to bring back the opposition to Astana and give them assurances on the ground they will stop the shelling on condition they attend», said Sohaib Alraheel, spokesman of Liwa al Furqan Brigades, a faction of the rebel Free Syrian Army (FSA) operating in southwest Syria.

Major Issam al Rayes, spokesman for the Southern Front, a coalition of Western-backed FSA rebel groups, said shortly after the ceasefire announcement the armed opposition were «very distrustful» of the Syrian army’s willingness to abide by the ceasefire or Russia’s readiness to rein in it’s ally.

The renewed aerial strikes and artillery shelling by the army only went to prove their earlier doubts, Rayes said.

«We had cast doubt on the ceasefire the moment it was announced and knew it would not be different from previous ones.

The regime is lying and the Russians are lying and are not serious in achieving a ceasefire», al Rayes told Reuters.

«The Russians are duplicitous and procrastinating and are part of the problem and so cannot be part of it solution», Rayes added.

The latest announcement for the first time extends the ceasefire to the whole of southern Syria, including southwestern Quneitra province near the border with Israel and Sweida province in the southeast.

The United States and Russia have held secret talks on creating a «de-escalation zone» in southern Syria, Western diplomats and regional officials said in early June.

The Israeli army has in recent days launched strikes against Syrian army outposts in the southwest, where the Iranian-backed Hezbollah has a strong presence, saying it was retaliating for errant fire from Syrian positions that landed in the Israeli-controlled Golan Heights.