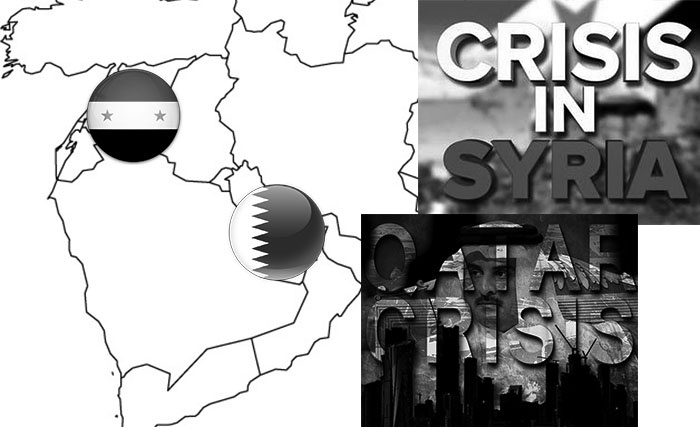 The crisis that broke out in the Gulf pitting Saudi Arabia and its allies against Qatar could provide some relief to the much more serious regional crisis in Syria.

The increasingly incendiary nature of the row between the Gulf adversaries, the diminishing prospect of a political solution being reached, and Turkey’s direct intervention via the dispatch of troops to Doha, could all have a positive impact in Syria and help consolidate the current DE-escalation there – especially in light of the heavy losses sustained by Islamic State (IS)/Daesh in Mosul and to a lesser extent around its official capital of Al-Raqqa.

This may be the first time in almost seven years that the Syrian crisis has been displaced from its permanent place as the top story in the Arab print and broadcast media, supplanted by the fast-moving developments in the Gulf-Qatar crisis.

The reason for this is no great mystery.

The main regional players in the Syrian conflict have all turned their attention to the Gulf showdown.

The two principal antagonists, Saudi Arabia and Qatar, may differ over a host of regional issues, but they have both been in complete agreement over one particular objective: to hasten the overthrow of President Bashar Al-Assad and his government.

Both have opened up their treasuries and their multi-billion dollar sovereign wealth funds to bankroll armed Syrian opposition factions, and employed their media empires to incite and mobilize in their favor.

The showdown between Qatar and Saudi Arabia is not confined to economic and propaganda warfare, but has also become a polarizing issue for various regional and international players.

Many taboos have been broken in the process.

Enemies have been transformed into allies, and a new political reality has been imposed.

By way of illustration, Turkey and Iran, who have been engaged in bloody warfare in Syria – whether directly or by proxy – now stand in the same trench, that of Qatar against the Saudi-UAE-Egyptian-Bahraini alliance.

The Iranians sufficed with opening up their airspace and ports to Qatari aircraft and ships.

But the Turks went further and sent troops and tanks to defend their Qatari allies, not against any military intervention by their hostile neighbors, but against any domestic disturbances they may try to ignite in order to destabilize the Qatari regime, as they did in 1996.

Journalist colleagues who were recently in Syria say the authorities in Damascus are overjoyed at the outbreak of this crisis between the two prime movers of the ‘conspiracy’ targeting their country.

They note that the just-concluded month of Ramadan was the most peaceful and normal in years.

First- and second-ranking regime officials are convinced that their country’s crisis is finally heading towards resolution.

Even if it has not actually ended, they firmly believe that things are heading decisively in the regime’s favor and that the political and armed opposition have never been in worse shape, suffering additional neglect and splits as a result of the growing quarrel between their Gulf sponsors.

When Turkish President Recep Tayyip Erdogan calls his Russian counterpart Vladimir Putin to affirm the need for cooperation in resolving the crisis politically, the dramatic shift in the calculations of the key players in Syria become plain to see.

It has been supplanted by other objectives, from preventing the establishment of one or more Kurdish states in Iraq, Syria and/or Turkey itself, to resisting the serious threat to forcibly change the allied regime in Qatar.

Alliances in the Middle East are notoriously fluid and shifting.

They can be overturned and reversed in the flicker of an eyelid.

Few people used to be dearer to Erdogan’s heart than Bashar Al-Assad.

Libya’s Col. Muammar Qadhafi was good friends with the former Qatari emir Sheikh Hamad bin-Khalifa. And the Muslim Brotherhood was among the organizations closest to and most trusted by the Saudi ruling family.

Erdogan now wants a political solution in Syria because he realizes that a military solution is no longer possible, and that Turkey faces an existential threat represented by growing US backing for the Kurds.

Having lost its American and Saudi allies, Turkey cannot confront this threat unless it has good relations of alliance with Syria, Iraq and Iran.

Putin is the gateway through which Erdogan can reach agreement with the alliance comprising Iran, Iraq and Syria (to which Qatar may soon be added).

After recovering Mosul and ridding itself of most of the IS threat, Iraq will focus on recovering and activating its regional role as part of the Iranian regional axis.

The interests of Erdogan and Assad now inadvertently coincide as a consequence of the Gulf crisis.

It may draw them together after seven years of mutual loathing and conflict.

This should not come as a surprise.

As noted above, nowhere on earth is alliances and enmities more changeable than in the Middle East.