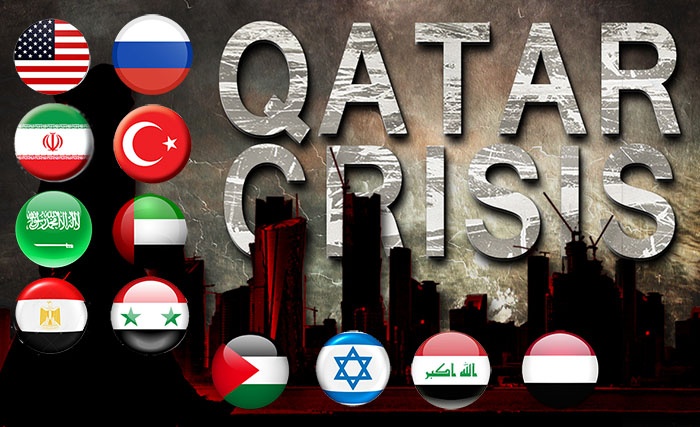 The diplomatic crisis around Qatar has frozen several regional conflicts and disguised the attempts at resolution by others.

No-one knows when the curtain will rise, but it should reveal a region which has been profoundly transformed.

Since the expulsion of the majority of Palestinians from their homes (the Nakhba, 15 May 1948) and the refusal by the Arab peoples to accept this ethnic cleansing, only the separate Israeli-Egyptian peace treaty of Camp David (1978) and the promise of a two-state solution at the Oslo agreements (1993) have partially modified the situation.

However, when the secret negotiations between Iran and the United States were revealed, Saudi Arabia and Israel decided to talk in their turn.

After 17 months of secret meetings, an agreement was reached between the Custodian of the two Holy Mosques and the Jewish state.

Israel made this a reality by the participation of Tsahal in the war in Yemen and the transfer of tactical atomic bombs.

Let’s remember that this agreement anticipated the evolution of Saudi Arabia so that its society would remain Salafist and its institutions would become secular.

It also anticipated the independence of Iraqi Kurdistan (which will be the subject of a referendum in September) and the exploitation of the gas fields in the «Empty Quarter» (which straddles Saudi Arabia and Yemen, thus explaining the currrent war) and those of Ogaden (thus explaining this week’s withdrawal of Qatari troops from the Djibouti frontier).

Finally, Egypt has decided to hand over the islands of Tiran and Sanafir to Saudi Arabia, as she had promised to do last year.

By doing so, Riyadh has recognised de facto the Camp David agreements, which specifically manage the status of these territories.

Israel confirms that it has obtained the Saudi guarantees.

Let us observe that the Egyptian decision was not taken under Saudi pressure (Riyadh had attempted, in vain, to block deliveries of oil and then a loan of 12 billion dollars), but because of the Gulf crisis.

The Saudis have officialised their break with the Muslim Brotherhood, a decision which had been brewing since the transmission by President Al-Sissi of documents attesting to a project for a coup d’etat by certain members of the Brotherhood against them.

At first, Arabia believed it could differentiate between the good and bad Muslim Brothers.

It had already accused Qatar of supporting the putschists, but the situation evolved peacefully on that occasion.

As from now, Riyadh intends to fight the Brotherhood in its entirety, which will force it to review its position concerning Syria.

The transfer of these islands, which have been Egyptian since the London Convention of 1840, makes little sense other than to allow Saudi Arabia to implicitly recognize, 39 years after the fact, the Egyptian-Israeli agreements of Camp David.

From its own side, Teheran has extended a welcome to the political directorate of Hamas (which is mainly composed of members of the Muslim Brotherhood) both in the name of solidarity with the Palestinian cause, and because it shares the same concept of political Islam.

The next step will be the establishment of public commercial relations between Riyadh and Tel-Aviv, as announced in The Times of 17 June (Israeli companies will be permitted to work in Arabia, and the airline company El-Al will be allowed to use Saudi airspace), then the recognition of the peace initiative of Prince Abdallah (Arab League, 2002) and the establishment of diplomatic relations (Prince Walid ben Talal would become their ambassador).

This project could bring peace in Palestine (recognition of a Palestinian state and compensation for the refugees), in Lebanon (withdrawal from the Shebaa farms), and in Syria (cessation of support for the jihadists and withdrawal from the Golan).

The Golan question will be particularly difficult because the Netanyahu administration — not without provocation – has declared its total annexation, while the United States and Russia reacted violently to the expulsion of the UN forces tasked with observing the disengagement (FNUOD) and its substitution by AL-Qaida.

However, it is not impossible that during the war on Syria, Washington or Moscow may have promised Tel-Aviv that they would not modify the status quo in the Golan.

This project of general settlement reflects the method of businessmen Donald Trump and Jared Kushner – creating an economic situation which imposes political change.

It will of necessity run into the opposition of the Muslim Brotherhood (Hamas), and the triangle of political Islam — Iran, Qatar and Turkey.

All of the region’s actors agree that today, Iraq and Syria form one single battlefield.

But the Western powers, who are still clinging to the lies of the Bush Jr. administration (even though they admit the stupidity of the weapons of mass destruction charge against Saddam Hussein) and the romantic narrative of the «Arab Springs» (even though they admit that this movement never made any attempt to bring freedom, but on the contrary, to impose political Islam), stubbornly persist in considering them as separate.

We refer our readers to my book Right Before our Eyes for information on how the war began.

What is obvious for everyone in the region is that since the accession to power in Beijing by President Xi Jinping, bearer of the project for the two Silk Roads, Washington has been pushing for the creation of a «Sunnistan» straddling Iraq and Syria.

In order to acheive this goal, it has financed, armed and supervised Daesh in order to cut the communication route between Beirut-Damascus-Baghdad-Teheran and Beijing.

For four months, the Trump administration has been studying and negotiating the ways in which they might modify these policies and conclude a partnership with Pekin instead of continuing the current confrontation.

While on the ground we see a series of contradictory events – since the beginning of the Qatar crisis, the Iraqi and Syrian armies have suddenly advanced.

They have liberated the frontier territories previously held by Daesh and are now on the verge of establishing their junction (in other words, reconnecting the Silk Road).

The two armies are now separated only by two hundred metres of land controlled illegally by the US army.

As for the combats in Southern Syria, they have miraculously come to a halt.

A cease-fire has been unilaterally proclaimed by Damascus in Daraa.

In reality, Moscow and Washington have given the assurance to Tel-Aviv that Syria will only allow the deployment of Russian troops, and not the Iranians or the Lebanese Hezbollah.

To make a long story short, if the Pentagon follows the orders from the White House, most of the conflict should end.

The United States and Saudi Arabia, who were the enemies of Iraq and Syria, will once again become their allies.

The Yemenis could be the ones who pay for this current evolution.

While it is apparent that Saudi Arabia entered the war in order to set up a government favourable to the joint exploitation of the oil fields of the «Empty Quarter», and for the personal glory of Prince Mohamed Ben Salman, it seems that the help given by Iran to the Houthis and to ex-President Saleh diverts the gaze of the Arab countries and the «international community» from the crimes for which they are responsible.

It’s a time for taking sides, and almost everyone has opted for Saudi Arabia and against Qatar and its Turkish and Iranian allies.

What was positive in Palestine, Iraq and Syria proves to be negative in Yemen.

Since 5 June and the rupture of diplomatic relations between Riyadh and Doha, the chancelleries are all preparing for a possible war, even if Germany is the only country to have spoken of this publicly.

This situation is all the more surprising because Qatar — and not Saudi Arabia – is the observer for NATO.

Resignations come one after the other in Doha, from the US ambassador Dana Shell Smith to the selector of the national football team Jorge Fossati.

Not only have the states aligned with Riyadh broken off their commercial relationships with the emirate, but numerous companies without any particular links with the Gulf have done the same in the face of the risk of war.

This is, for example, the case of COSCO, the largest Chinese maritime company.

In any case, and despite justified historical claims, it would seem impossible for Saudi Arabia to annex Qatar when it was opposed to the annexation of Kuwait by Iraq for the same reasons.

One rule has been imposed on the world since British decolonization – no-one has the right to touch boundaries laid by London.

The unique aim of this rule is to maintain the insoluble problems for the new independent states.

In this way, London maintains de facto the perpetual dependency of these states on British rule.

Indeed, the pending arrival of 43,000 Pakistani and Turkish soldiers to defend Qatar should reinforce its position.