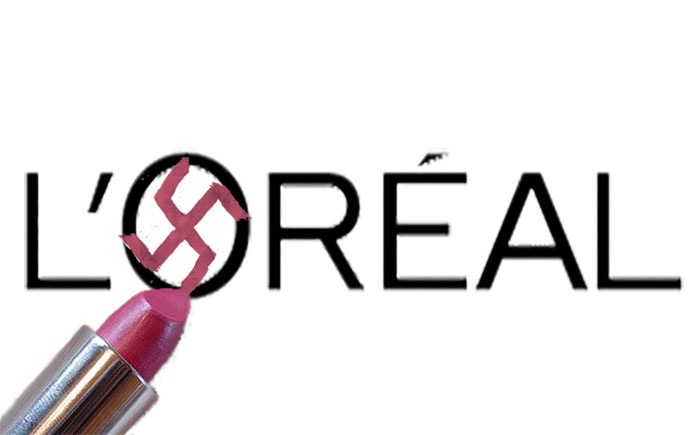 L’Oréal, the cosmetic giant, has just announced that it will restructure its capital.

Thus the holding company established by Eugene Schueller during the Second World War will be wound up.

The founder of this group was also one of the main financiers of the plot by La Cagoule and French Nazis.

When France was liberated from German occupation, L’Oréal and its foreign subsidiaries provided refuge to criminals on the run. Today, the heiress of this group, Liliane Bettencourt, has become the richest woman in France.

A Company that wants to buy out the Republic

Later on, in 1928, he buys up Monsavon, then the Valentine paintings, the Dop shampoos and the magazine Votre Beauté.

Gradually shifting his position to the extreme right, Schueller becomes known for his economic theories on a “proportional salary”.

On 6 February 1934, in reaction to a resounding political-financial scandal, the leagues of veterans that fought in the Great War demonstrate before the Chambre des députés in Paris seeking the resignation of the Daladier government.

Due to fascist ringleaders, the gathering turns into an insurrection and tries to topple the Republic to the benefit of Colonel de La Rocque who, however, refuses to play the role that one wants him to play.

Various other skirmishes follow in the weeks that follow including an attempt to lynch Léon Blum during the funeral of a historian sympathetic to the monarchy.

As a consequence, on 18 June, the government declares the dissolution of the leagues of veterans.

At once, a group of fascist militants, most of whom came from section XVII of the “Camelots du Roi”, break with Charles Maurras, a monarchist philosopher and decide to go underground.

They form a Secret Organization for National Revolutionary Action (OSARN by its French acronym).

They are soon to be joined by Gabriel Jeantet, François Méténier and Dr Henri Martin.

Colonel de La Rocque warns former league members that their movement may be infiltrated by “traitor groups”, that is by fascists acting on behalf of foreign states, such as Italy and Germany.

In any event, OSARN is quickly restructured into local groups and hierarchized into a system that is highly subdivided, so that apart from the leaders, other members of the organization are unaware of the organization’s extent, its real objectives, the resources and support it has.

Some cells participating in the plot, including the so-called, “Knights of the Gladiator”, led at Nice by Joseph Darnant and François Durand de Grossouvre, adopt a ritual and costume inspired by the US-based Klu Klux Klan. It will be for this reason that OSARN will be nicknamed by monarchists as La Cagoule.

Eugene Schueller, a close friend of Eugene Deloncle, contributes his personal assets to the plot. Several meetings of the management team take place in his office at L’Oréal’s headquarters.

A group of youngsters, living in a dormitory of the Marista Fathers (104, rue de Vaugirard, Paris), touch base with the leaders of the plot and participate in some of their activities without, however, formally joining the OSARN.

Failures and Divisions Based on Anti-Semitism

In one and a half years, OSARN formalises its relations with the government of Benito Mussolini in Italy, and later with Adolf Hitler in Germany.

On their behalf, it transports weapons to Francisco Franco in Spain and eliminates political refugees in France.

In exchange, it is given considerable financial and logistical support.

The following day and in the weeks that follow, sunlight is shed on the plot.

Searches uncover caches of weapons distributed throughout the entire territory.

The President of the Council, Edouard Daladier, halts the inquiry when he begins to discover that OSARN’s network branches out to its superior officers going right up to the chief of staff.

In fact, it does not appear possible to put an end to the organization without beheading the French army at a time when the threat of war is becoming increasing real.

Yet Daladier is wrong, for the Second World War is in fact declared and France capitulates.

“The French community”
The Secret Association that loots Jewish and Masonic assets. Its leaders include Jacques Correze and Jean Filliol.

While some members of La Cagoule, hostile to foreign domination over France, support De Gaulle, most of them celebrate the victory of fascism and commit to collaborating with the Nazi Occupation.

In September 1940, Eugène Deloncle and Eugène Schueller establish the Social Revolutionary Movement (the French acronym for which is MSR, pronounced “aime et sert” i.e. “love and serve”) with the help of the Reich’s ambassador in France, Otto Abetz, and the personal approval of the Gestapo Head, Reinhardt Heydrich.

The organization’s programme indicates: “We want to build a new Europe in cooperation with national socialist Germany and all other European nations freed from liberal capitalism, Judaism, bolshevism and French masons (..) to regenerate France and the French race (…) to ensure the Jews that stay in France are subject to harsh laws, preventing them from infesting our race (…) to create a socialist economy (…) which guarantees a fair distribution of production by simultaneously increasing both wages and production”.

As the first application of this programme, Deloncle organises bombing seven Parisian synagogues, in the night of 2 and 3 October 1941.

Furthermore, an organization within the organization is established with the help of SS Theo Dannecker, representing Adolf Eichmann.

This new entity is named the French Community and its aim is to:

“free France completely from the ferments of corruption that are the Jews and the Free Masons”.

It is this secret group that organizes the spoliation of Jews often for its members’ personal gain.

“Guillemot and Delamotte”, Paris editors Adolf Hitler and Eugene Schueller feature side by side in his catalogue

As for young André Bettencourt, he becomes the French leader of PropagandaStaffel.

He is placed under the triple guardianship of the Nazi Minister of Propaganda, Joseph Goebbels, the Wehrmacht and the Gestapo.

He has the final say on all the French publications — both collaborationist and Nazi.

He personally edits La Terre française, a publication that is overtly Nazi, targeting rural families and strongly advises re-educating degenerate intellectuals by the forced return to “the land which does not lie”.

He hires the agronomist René Dumont.

Furthermore, Bettencourt regularly offers columns in his newspapers to Schueller.

On 15 February 1941, at the request of the SS, the MSR of Deloncle merges with Marcel Déat’s Rassemblement national populaire (RNP).

His book, La Révolution de l’économie, is classified as a reference work for French fascism.

On 15 June 1941, in an address to the Congress of the Organization at Paris’s Palais de la Mutualité, Schueller calls for “preliminary revolution for cleansing and remedy” which must “necessarily be bloody”.

It will simply consist in quickly shooting fifty to a hundred high profile individuals”.

On 22 June 1941, the Reich attacks the Soviet Union. Deloncle and Schueller then decide to establish a Legion of French Volunteers (LVF by the French acronym) to fight Bolshevism on the Eastern front.

It is led by Jacques Correze.

All members swear an oath of allegiance to the Fuhrer.

Through this powerful, armed organization, Deloncle and Schueller try to eliminate their political adversary Pierre Laval and their ally/rival Marcel Déat.

On 27 August, 1941, on the occasion of a ceremony marking the departure of an LVF contingency for the Russian border, they organize a double attack during which Laval and Déat are wounded.

On 20 December 1941, Andre Bettencourt perfectly aware about the debates taking place at Berlin, writes in the Christmas editorial of La Terre française:

“Despite everything, one day, within thirty years from now, the Jews will imagine that they are able to win the battle.

They succeeded in putting their hands on Jesus and crucifying him.

Then rubbing their hands together, they cried: “Oh that his blood falls on us and our children”.

You know very well how that blood fell and still continues to fall.

The prescriptions of the eternal book must be realized”.

In fact, some days later, the Conference of Wansee decides to implement “the final solution”.

Some millions of people are going to be exterminated in utmost secrecy.

At the end of the internal conflicts in the French Nazi movement, there is no question it is Deloncle who falls from grace.

On 18 March 1942, Eugène Schueller rushes to the Reich’s embassy and confirms that he has turned his back on his friend.

The interview is stored in the German archives.

The battle of Stalingrad reverses the course of events.

From now on, the Reich is no longer invincible.

André Bettencourt becomes closer to his friend François Mitterrand who executes various duties at Vichy where he shares an office with Jean Ousset, the leader of Joseph Darnard’s, Youth Movement of the French Legion of Soldiers.

It appears that they will then join the Resistance within the National Movement for Prisoners of War and Deportees (the French acronym for which is MNPGD).

This activity is officially recognized only 40 years later by the Mitterand administration, yet historians are still constantly questioning it.

At the end of 1942, André Bettencourt is sent by Eugène Schueller “to aryanize” Nestlé in Switzerland (the boss of L’Oréal became one of Nestlé’s major shareholders).

Bettencourt uses his transfer as an opportunity to meet Allen Dulles and Max Schoop both from the Office of Strategic Services (OSS) — predecessor of the CIA.

To date, we have no idea how this money was used.

Eugène Deloncle is murdered. But the crimes committed by members of La Cagoule do not end there, not even when the allies disembark at Normandy.

Because they were well worth it

Thanks to the testimony of André Bettencourt and François Mitterrand, Eugène Schueller is released on the grounds that he had participated in the Resistance.

François Mitterand is hired as director of the magazine Votre Beauté.

André Bettencourt comes on board the group’s management.

As for Jacques Correze, he becomes the boss of L’Oréal in the US.

In 1950, André Bettencourt marries Liliane, the only daughter of Eugène Schueller.

Rue Saint-Dominique, the office André Bettencourt used when he managed PropagandaStaffel, is transformed into one of the residences of Opus Dei.

Meantime, Robert Mitterand moves into rue Dufrenoy, more exactly, into the building that will house the head office of the Opus in France.

This work is politically led by Jean Ousset.

André Bettencourt then went on to pursue a brilliant career.

As a journalist, in 1945 he established the Journal agricole, for the former readers of La Terre française.

His political career led him several times to the French parliament and government.

He could therefore resume his past activities by becoming Secretary of State for Intelligence (1954-55), a post created by his friend François Mitterrand in 1948, and from where both of them will give shape to the contemporary French press.

The two men are inseparable to the point that in 1986 when Mitterrand, having become a socialist and President of the Republic has to cohabit with a right wing Assembly, he considers choosing André Bettencourt as Prime Minister.

But fearing the return of ghosts of the past, he abstains.

The present however houses the past.