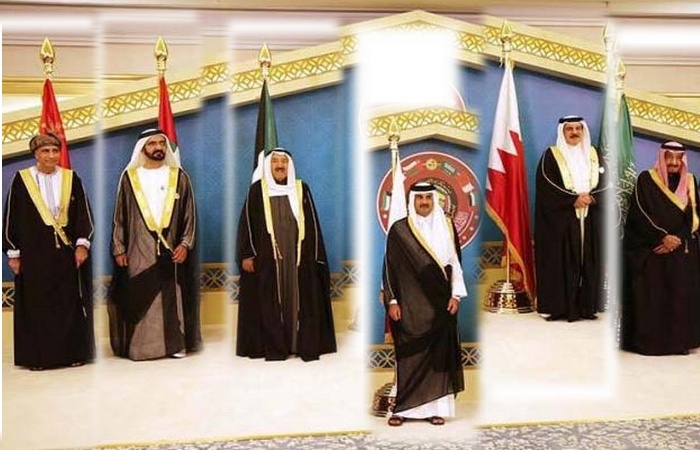 The escalating disagreement between Qatar on the one side, and Saudi Arabia, the UAE, Bahrain, and Egypt on the other side, confirms the rampant chaos and divisions that dominate the Arab region

We must admit that this disagreement came as no surprise.

What did surprise us, however, are its intensity, the manner in which it was expressed, and the measures and steps that have and may still result from it. After all, four of the aforementioned states are supposedly members of the GCC (Gulf Cooperation Council) and the Arab coalition that is fighting the Houthis and the General People’s Congress [Saleh] party in Yemen.

In addition, the four states, or two of them at least, have pumped in billions of dollars and thousands of tons of weapons to fan the flames of the bloody conflict raging in Syria, Libya, and Yemen – and are still doing so.

The GCC has previously witnessed many disagreements, and in fact, political and border wars between its members – especially, Qatar and Saudi Arabia.

But what is happening today between the abovementioned states may open a wound that would be difficult to close, and create a rift that will be difficult to bridge, at least in the foreseeable future.

The explosive developments began when the Saudi-owned Al-Arabiya and the Emirati-owned Arab Sky News broadcast statements attributed to the Emir of Qatar, Prince Tamim bin Hamad Al Thani, during a graduation ceremony of a number of recruits.

The Emir allegedly protested against the escalation of the disagreement with Iran, adding that it was unwise to be hostile to it.

He also allegedly denounced including Hezbollah and Hamas on the list of terrorist organizations, since both are resistance movements.

And he accused Saudi Arabia, the UAE, and Bahrain of inciting against Qatar and accusing it of sponsoring terrorism and its organizations.

He also took a stab at Saudi Arabia by saying that ‘the states that claim to be fighting terrorism are those that are religiously most hardline and are providing pretexts for the terrorists’.

In fact, he went even further by criticizing the hundreds-of- billions of dollars spent on the purchase of weapons rather than on developmental projects, and when he speculated that Trump’s days in office were now numbered.

Al-Arabiya and Arab Sky News picked up these alleged statements and hosted many Egyptian and Saudi analysts who attacked Qatar mercilessly, accusing it of what they portray as terrorism and hosting terrorist organizations, especially the Muslim Brotherhood.

Moreover, Al-Arabiya broadcasted an audiotape in which the father of Qatar’s Emir, Sheikh Hamad bin Khalifa, is allegedly heard in a phone conversation with late Libyan leader Mu’ammar Al-Qadhafi attacking Saudi Arabia and predicting the collapse of the Al Saud regime.

Qatar’s giant media empire, of which Al-Jazeera television is the spearhead, was taken by surprise.

It did not respond by issuing clarifications or retaliate in kind.

Instead, it continued with its usual programs.

This lent some credibility to the anti-Qatar campaign for some time.

Then came the first clarification from a Qatari official after a number of hours, in the form of a very short statement claiming that the Qatari News Agency’s website had been hacked by unknown parties, and that the statements attributed to Prince Tamim were false.

But adding to the ‘lack of clarity’ was a ‘Breaking News’ item on Al-Arabiya to the effect that Qatari Foreign Minister Sheikh Mohammad bin ‘Abderrahman has instructed the ambassadors of Egypt, Bahrain, the UAE, and Saudi Arabia to leave Doha within 24 hours.

The Qatari foreign minister firmly denied this, and said that his statements had been taken out of context.

Saudi Arabia, the UAE, and Bahrain took an immediate decision to impose a blackout on Al-Jazeera’s websites and all Qatari newspapers on the Internet.

In fact, it is not unlikely for them to resort to jamming Al-Jazeera on the grounds that Qatar’s denial of the statements attributed to Prince Tamim and its insistence that the Qatari News Agency’s website had been hacked were not ‘convincing’.

They did not alleviate the crisis’ intensity or end the campaign on Qatar.

It is worth noting that this crisis in relations between Qatar on the one hand, and the UAE and Saudi Arabia on the other, follows two important developments:

– The first is U.S. President Donald Trump’s visit to Riyadh and his participation in three Saudi – Gulf, Arab, and Islamic – summits.

These summits focused on the war on terrorism and on Iran’s role as the latter’s spearhead, accusing it of playing a major role in undermining the region’s stability.

Moreover, the U.S. president held a somewhat tense meeting with the Qatari Emir on the summits’ margins.

– The second development was the appearance of a number of articles in U.S. and Western newspapers attacking Qatar.

The latest was in Foreign Policy by John Hannah, a former official in the U.S. defense and state departments and one of former U.S. vice-president Dick Cheney’s advisors.

He accused Qatar of backing terrorism, inciting the killing of Americans in Iraq, using Al-Jazeera effectively to transform the Arab Spring into an extremist Islamic Winter, and of financing Islamist groups with money and weapons to fight in Syria.

He also accuses Qatar of covering up the presence in Doha of Khaled Sheikh Mohammad, the architect of the 9/11 attacks, and facilitating his escape to Afghanistan before the CIA arrested him.

Furthermore, Hannah accuses Qatar of ‘double-dealing’: Of hosting the ‘Udeid Air Base from which U.S. warplanes that struck Iraq where launched, while also siding with Saddam Hussein’s regime and backing him in the media.

Hannah also confirms that Cheney had discussed the possibility of moving ‘Udeid Air Base from Qatar, and says that Trump supports this option, while the UAE and Saudi Arabia are candidates for hosting it.

He also demanded that Qatar should be punished for sponsoring terrorism.

Prince Tamim was given a ‘cold’ reception at the Riyadh summit. He only spoke with Mr. Fahd bin Mahmoud, the Deputy PM of the Sultanate of Oman and the head of its delegation.

He also had a short word with Saudi Crown-Prince Mohammad bin Nayef.

Sources inside the summit tell us that [Abu-Dhabi Crown-Prince] Mohammad bin Zayid did not speak to him or shake his hand at all; he bypassed Prince Tamim instead and stood next to President Trump in one of the official pictures.

The fact that the Qatari media empire in its various branches has confined itself to ‘clarifying’ the hacking of the Qatari News Agency’s website, denying the statements attributed to Prince Tamim, and ‘retracting’ the decision to expel the ambassadors of Saudi Arabia, the UAE, Egypt, and Bahrain, suggests that Qatar has uncharacteristically decided to resort to calming down the situation in an attempt to contain the crisis.

However, we believe that the other side may continue to escalate until Qatar ends its support for the Muslim Brotherhood and its media tools, adopt a more hostile attitude towards Iran, and identifies totally and literally with the policies of the Saudi/Egyptian/Emirati triangle.

Gulf sources have leaked reports of a supposed ‘scenario’ that enjoys a U.S. green light for changing the top leadership in Qatar.

They add that what is happening today is a prelude to this.

However, there is nothing to confirm this scenario, even though it may not be totally unlikely.

After all, a coup attempt did occur in 1996, aimed at toppling the former Emir of Qatar and restoring his father to power.

It is ironic that the three states – Saudi Arabia, the UAE, and Egypt – were participants in that failed coup attempt, supporting it with money, weapons, and soldiers.

Will history repeat itself? We have no answer.

But the crisis is serious and the estrangement is worsening.

And nothing can be excluded these days, in light of the Emirati/Saudi alliance that has not refrained from fighting the war in Yemen and has continued to do so for over two years, and is now beating the drums of another war against Iran, threatening to carry the battle deep inside it.

Here, another question seems legitimate: Who will rush to stand by Qatar’s side and defend it?

Will it be Iran, which Qatar and the factions allied with it in Syria and to a lesser extent in Iraq have been fighting?

Or will it be Turkey, which is now in a state of hostility with all of its neighbors, as well as with the U.S. and most of Europe’?

Or will it be the U.S. ‘Udeid Air Base, which together with its soldiers and warplanes, wants to leave Qatar?

At present, we can do no more than raise questions, and admit that Qatar is in a critical and unprecedented position, facing fierce enemies and having a very small number of allies, at a time when reason and wisdom have been set aside.

But please feel free to correct us if we are wrong.