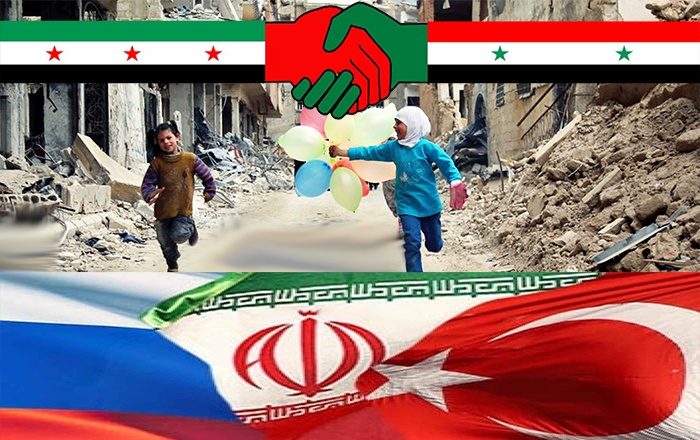 «The Public Front of Syria» can rally this country in an era of discord, and save our entire world from a global terrorist threat.

The explosion, which thundered on the evening of May 22 at the stadium «Manchester Arena» during the concert of the American singer Ariana Grande that killed 22 people, with more 120 injured — mostly children and teenagers.

The British Special services confirmed that the terrorist act was committed by a «suicide bomber» — a 22 year old native of Libyan origin «Salman Abedi».

The responsibility for this monstrous crime was assumed by «Daesh».

On the same day, May 22, at the tripartite talks in Astana, between Russia, Turkey and Iran specified the boundaries of de-escalation zones in Syria.

According to experts, the formation of security zones on the Syrian territory will stop the bloodshed and set the stage for the beginning of political dialogue.

Syria… The protracted negotiations on this country in Geneva have not yet brought the expected results, and in these circumstances Astana has become, perhaps, the only platform on which the most effective mechanism for resolving the armed conflict and stabilizing the social-political situation has been worked out.

This was confirmed in his report to the members of the Security Council and the special envoy of the UN Secretary-General for Syria, Mr. Staffan de Mistura:

«In my opinion, a promising step was made in Astana — a memorandum was concluded between the three guarantor countries on the creation of de-escalation zones.

The reports I have received so far indicate a significant reduction in the level of violence, including air strikes, in most of the areas covered by the memorandum.
In those areas where there is no air bombardment, the normal life is quickly restored», said Staffan de Mistura.

Along with the elaboration of a mechanism for monitoring the regime of cessation of hostilities and the discussion of the issue of state reform in Syria, one of the key moments of the talks in Astana was the initiative to create the «Syrian Public Front».

According to resources at the Syrian Public Front, the preservation of the country’s integrity in existing borders, the consideration of the interests of all Syrian citizens and, of course, the elimination of terrorism, which completely coincides with the resolution of the UN Security Council, are indispensable conditions for the unification of the Syrian society.

«The future of Syria will determine by direct dialogue between the Syrian opposition and the regime with Russia, Turkey and Iran – which are the guarantors of peace in Syria, while other states must further fulfill their obligations.

Our entire army, political structures, civilian population, religious and ethnic groups should be involved in the process of peaceful settlement of the conflict».

In case the «Syrian Public Front» supports the current leadership of the country and the political forces and structures controlled by it, this association will become the most real threat for international terrorist organizations, and not only in the territory of this country.

The Date of May 22nd 2017 — is the pointed date from which the countdown to bring a new, peaceful life for the Syrian people from the long-suffering time in Syria will begin.