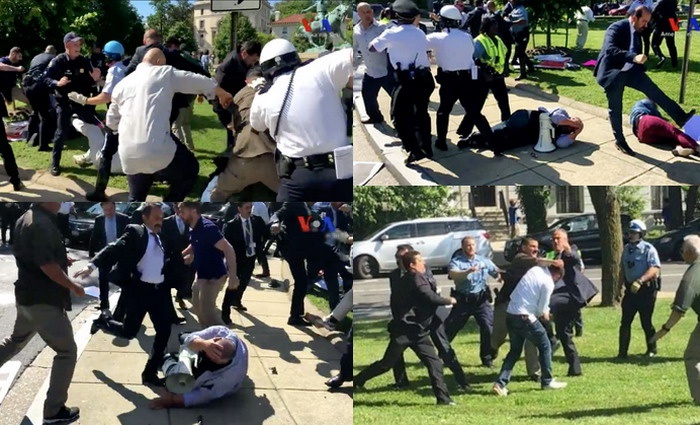 When the Turkish President, Recep Tayyip Erdoğan, arrived at the Turkish embassy at Washington, he was greeted by demonstrators who had assembled before the embassy, peacefully demonstrating against his draconian policies.

The Embassy’s security services considered that these peaceful demonstrators included militants of the Kurdish cause, who according to Ankara are “terrorists” and left to “defend” President Erdoğan.

This was followed by a brawl during which a dozen people were seriously injured.

Not knowing what action to take against a security service that benefitted from diplomatic immunity, police action was limited to separating the two camps.

The two diplomats arrested when they were beating up demonstrators, were released some minutes later.

The State Department has summoned the Turkish Ambassador who has stuck to his version of the facts: the security of President Erdogan, “attacked” by “terrorists”, had to be ensured.

Several members of the US Congress, including John McCain, have asked for the Turkish diplomatic personnel to be expelled.

For his part, the Turkish Minister of Foreign Affairs, Mevlut Cavusoglu, has asked Washington to recall its special envoy for the Syrian conflict, Brett McGurk, whom he accuses of supporting Kurdish “terrorists”.

The President of the Senate’s Foreign Affairs Committee, Ed Royce, wrote to the Attorney General and to the Secretary of State to ask them to take measures.

A video provides evidence that President Erdoğan ordered and observed those opposing him, being beaten up.

President Erdoğan, who has now raised questions as to his commitments with respect to the minority Kurd and who has unilaterally broken the truce with the PKK, is leading a harsh repression of Kurds militants.