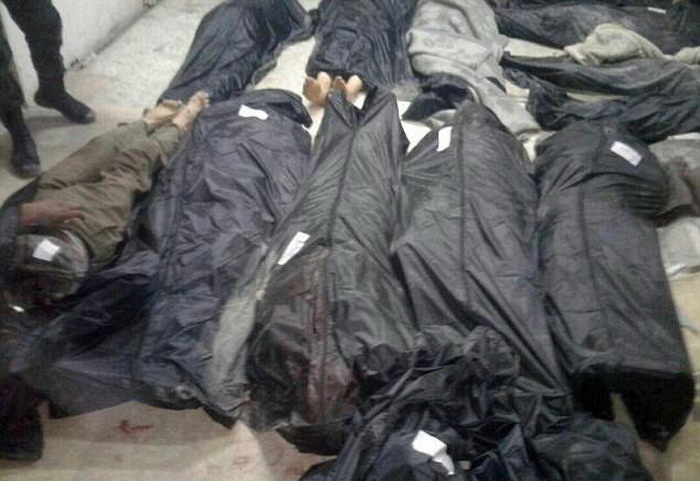 The executions are said to have happened in the last 24 hours in a village held by anti-jihadists in eastern Syria.

The claim has been made by the Syrian Observatory for Human Rights, which said the terror group also captured fighters participating in a US-backed operation against ISIS.

Rami Abdel Rahman, of the British based group, told AFP: ‘IS fighters entered Jazrat Al-Boushams village on Friday evening and executed 19 civilians, including two women and two children, with bullets to the head before torching the corpses.

‘Some were rounded up in the street before being killed, and others were executed at home’.

It happened in Syria’s eastern Deir al-Zor province, near the provincial boundary with Raqqa.

The Observatory posted a video showing the corpses of around a dozen men who had apparently been shot. Reuters could not verify the video’s authenticity.

The three abducted fighters are believed to be members of the US-backed anti-ISIS Kurdish-Arab Syrian Democratic Forces alliance (SDF).

Jazrat al-Boushams village is in Deir Ezzor province, which is largely controlled by the jihadists.

It was captured by the SDF when alliance fighters first entered the region earlier this year.

Despite being pressed militarily on all sides in Syria, notably by the SDF, the jihadist group retains an ability to carry out murderous attacks.

Separate forces are fighting the Islamists, who are enemies of all other sides in the Syrian conflict, including U.S.-backed Kurdish and Arab fighters, and Russian-backed Syrian forces.

The latest report comes a day after it emerged that ISIS savages had executed and then dismembered dozens of women and children amid fears the terror group is plotting a wave of massacres in Shiite villages.

Extremists beheaded some prisoners and used bricks to kill children before hacking off their limbs during horrific raids in Hama province in central Syria.

More than 50 were killed during clashes including at least 24 women and children in villages where many residents belong to the Ismaili branch of Shiite Islam.

It has raised fears of a new atrocities mirroring those ISIS carried out in other minority communities — including Yazidi areas — in Syria and Iraq.

The villages, Aqareb and Al-Mabujeh, are located near the town of Salamiyeh and the highway that links the capital, Damascus, to the northern city of Aleppo.

The two villages are home to members of several religious minority sects, and Al-Mabujeh has been targeted by IS before.