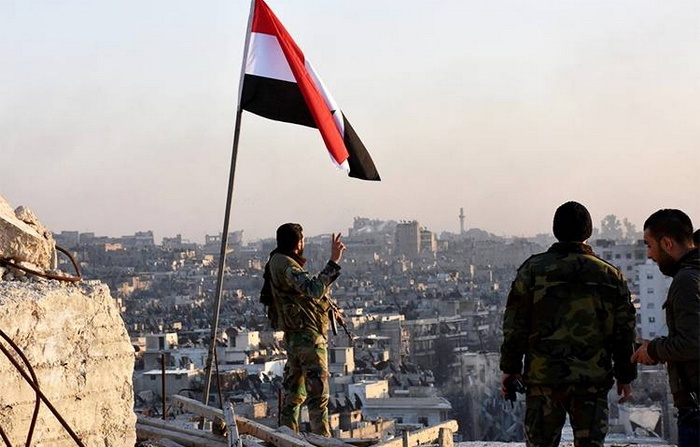 The Syrian army and its allies are on the verge of completely seizing the rebel-held district of Qaboun on the edge of the capital Damascus following over two months of aerial strikes and artillery shelling, rebels and state media said on Sunday.

But rebels said they still held a small pocket within the neighborhood that lies in the northeastern edge of the capital that has been mostly reduced to rubble after around 80 days in which it was struck by hundreds of aerial strikes and missiles.

The army had resumed its intensive bombardment in the district on Wednesday after a one-day ultimatum it gave the rebels mainly drawn from the area to surrender and agree to evacuate to rebel-held areas in northern Syria.

«The regime has threatened to destroy what is left of Qaboun and will not accept anything but a military solution», Abdullah al Qabouni from the local council of the district told Reuters.

Hundreds of rebels and their families had been evacuated this week from the adjacent Barzeh district after rebels there decided to lay down their arms and leave to rebel-held Idlib province.

They included some from Qaboun.

There were unconfirmed reports from a local source in the district that an agreement had been reached to evacuate the rebels from Qaboun on Sunday.

About 1,500 fighters and their families are now trapped in a nearly one square kilometer zone.

A news bulletin on state television said evacuations had begun, quoting the governor of Damascus.

No other details were provided on the numbers.

Most of the residents of the once-bustling area, that had sheltered thousands of displaced people from other parts of Syria in the course of the conflict, had fled in the last two months as the bombing escalated.

The loss of Qaboun following Barzeh is a another blow to rebels battling to keep a foothold in the capital and facing government troops who are backed by Russian air power and Iranian-backed militias.

They are situated on the eastern gate of Damascus, districts which were the scene earlier this year of battles that were the first such large-scale foray inside the capital in over four years.

The army was able to repel the attack after heavy aerial bombing forced the rebels to retreat.

Syrian President Bashar al-Assad has promoted the use of such evacuations, along with what his government calls «reconciliation» deals for rebel-held areas that surrender to the government, as a way of reducing bloodshed.

But the United Nations has criticized both the use of siege tactics which precede such deals and the evacuations themselves as amounting to forcible displacement.

The Sunni rebels accuse the government of seeking to evict Sunni inhabitants in these areas in demographic changes they say would eventually pave the way for Iranian-backed Shi’ites who back President Assad’s rule to take over their homes, a claim the authorities deny.

Army advances were made possible after tunnels between Qaboun and Barzeh were cut and the army isolated the areas from the rest of the main rebel enclave of Eastern Ghouta.

The tightening of the siege in the two districts, where tens of thousands of people lived, forced the hands of rebels to eventually agree to deals worked out elsewhere that force them to pull back to northern Syria.

«They besieged us and even medicines for children or any supplies were no longer left…
and people died of hunger», said Ahmad Khatib, who was among those who left on Friday.

The densely populated rural Eastern Ghouta district of farms and towns has been besieged since 2013.

It remains the only major rebel bastion near Damascus and the fall of Qaboun and Barzeh have removed a main line of defense that protected it, rebels say.