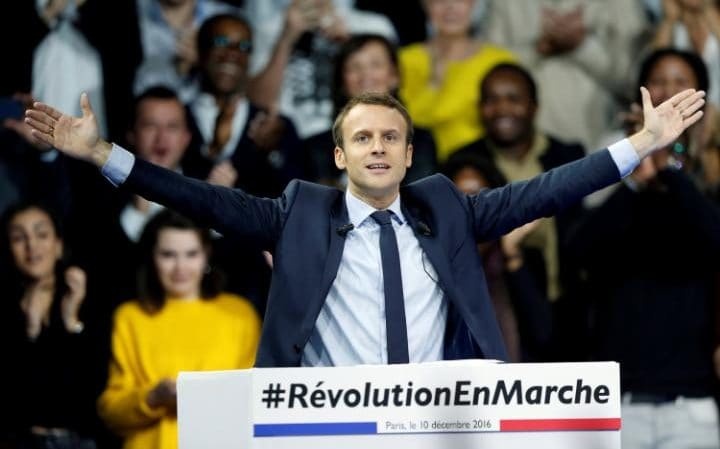 The French Presidential campaign has strayed from the democratic path.

We are now witnessing a conditioning of the electorate such as Europe has not known since the Second World War.

The example we analyze here is irrefutable.

It concerns a work of propaganda — in the dictatorial sense of the term — which should lead to the election of Emmanuel Macron.

The current French Presidential campaign is unlike any other European electoral campaign since the Second World War – for the first time, a team experienced in war propaganda is working in the shadows for one candidate.

The favorite for the election, François Fillon, was eliminated immediately from the first round on the basis of accusations of nepotism and corruption which led to his being faced with legal charges.

But none of these accusations has so far been verified.

The French electorate is now preparing to vote en masse in the second round for a person against whom they demonstrated just as massively two years ago, Emmanuel Macron.

They are doing so in order to protect themselves from a danger which is even more deadly in their eyes — Marine Le Pen.

And yet, when you ask these electors what specific danger this candidate represents, they can find nothing pertinent for which to blame her, and shelter behind their criticisms of her father.

Every one of the regional and national daily newspapers, without exception, denounce the danger of Le Pen and call for votes for Macron in order to block her accession to power.

When we asked the French people what they thought of Macron’s accusation against Marine Le Pen — that she may have supported the Prussian invasion in 1870 and the German aggression in 1914, they all laughed at us.

The video we are going to show you has been very widely broadcast by the TV channels and on the Internet.

When we showed it to our French interlocutors, they all agreed that they had seen it before, and had thought that Monsieur Macron was talking rubbish.

When we showed it to them again, they were astounded to rediscover the accusations that they had laughed at before.

It is therefore possible, apparently, to proclaim such stupidities without anyone reacting at the time.

Waving the commemorative medal of the necropolis of Notre-Dame-de-Lorette, cemetery for 45,000 combatants from the First World War, Emmanuel Macron declared that the war had been started by leaders who believed — «We are in better condition than our neighbors, so let’s go and destroy them».

Then he accused Marine Le Pen and her friends, who were «hiding in the Château de Montretout», of sharing the same ideology as the aggressor, and wanting to push France into an identical war.

The Château de Montretout, where Marine Le Pen was brought up as a girl, was taken by the Prussians during the siege of Paris, in… 1870.

The expression «hiding in the Château de Montretout» therefore suggests a link between Marine Le Pen as a child, and the King of Prussia and Emperor of Germany Wilhelm I.

The heros of Notre-Dame-de-Lorette fell on the field of honor in… 1914-18, and the aim of Emperor Wilhelm II was certainly not the destruction of France.

This is the first time that anyone has invented a causal link between the war of 1870, the First World War, and the Front National.

We are obliged to admit that the way in which these absurdities were presented has prevented the electors from consciously understanding the meaning of Emmanuel Macron’s declaration, but it did allow them to understand his words unconsciously.

They are therefore absolutely right to elect a personality whom they hate, but who will protect them from a woman who pretends to be the incarnation of the Nation, when in the past, she betrayed France and is responsible for the millions of dead from the wars of 1870 and the First World War.

According to sociologist Jean-Claude Pays, the vulgarity of these accusations, supported by every one of the daily newspapers without a single exception, has provoked an effect of stupefaction in the French public.

Numbed, they march towards the ballot box to vote as they have been ordered to do.

The cruder it is, the better it works.