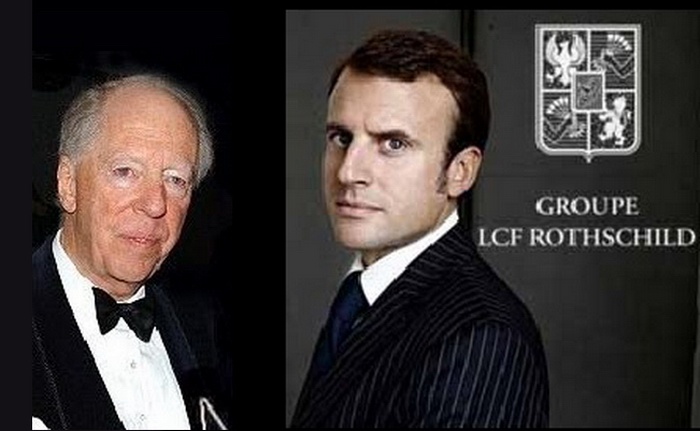 After having successively elected an agent of the CIA and an employee of the emirs of the Gulf to the Presidency of the French Republic, the French have been ripped off a third time, this time by an Israeli product.

They believe that they have chased away the spectre of fascism by voting for a candidate supported by NATO, the Rothschilds, all the companies of the CAC40 and the unanimous Press.

Far from understanding their mistake, they are still in a trance, and will probably not wake up before the end of the general elections.

As soon as his victory was announced, democratically elected President Emmanuel Macron defined a distance between himself and the People.

Refusing to mingle with the crowd, he took a long, solitary walk across the courtyard of the Louvre where his supporters were gathered.

The team of elected French President Emmanuel Macron has managed to hypnotise the French nation.

They managed to fabricate the election of their protégé with two thirds of the votes cast – a young man, only 39 years old, whose party was created on the Internet just one year ago, and who had until then never stood in any election.

This exploit was realized by the team of Steele & Holt, a mysterious company whose name refers to the TV series Remington Steele, a police procedural in which the director of a detective agency asks a thief (Pierce Brosnan) to play the role of her boss in order to serve as her cover.

Don’t bother trying to find out who is hiding behind this company – you’ll find nothing.

Except for the fact that its two main clients are AXA and the Rothschild family.

Everyone knows that Emmanuel Macron worked for the Rothschilds, but it’s a well-guarded secret that they organized his party.

As for the insurance company AXA, it is presided by Henri de La Croix, fifth Duke of Castries, who is also president of the NATO think-tank (the Bilderberg group), the Bosphorus Institute (Turkey’s think-tank) and, in France, the Institut Montaigne (a right-wing think-tank).

Henry Kissinger also incidentally invited Macron to the annual meeting of the Bilderberg group in 2014, along with François Baroin and Christine Lagarde.

The Bosphorus Institute made it possible to identify and corrupt various personalities from the right and the left who lent their support to Macron.

The name of the new party — En Marche !, was chosen in order to have the same initials as its candidate.

Otherwise, it would have been called En Avant!

When it was pointed out to general Ariel Sharon that the name of his new party evoked the name of Mussolini’s party — Avanti! — he retorted that that was not the case at all.

En Avant! was the order he gave to each of his special teams, for example when he invaded Beirut against the advice of his military staff.

Kadima! and En Marche! are centrist parties assembling personalities from the right and the left.

Ariel Sharon was a well-known «centrist» who created his party in order to break away from Benjamin Netanyahu.

Sharon was a colonialist who wanted to create a Palestinian state on the model of the South African Bantustans.

For him, apartheid was the only way to preserve Israel.

On the other hand, Netanyahu is a Talmudist.

He refuses to accept the idea of sharing Palestine with the goyim.

For him, they must be expelled, if they can’t be exterminated.

We will no doubt learn later why Macron wanted to break with the Socialist Prime Minister, Manuel Valls.

For the moment, it’s enough to note the insistence with which Valls attempted to join En Marche! and the flippancy with which Macron rejected him, to see that there is a serious conflict between them.

In order to launch Macron, Steele & Holt – in other words NATO and the Rothschilds – relied on the old pro-US network of the Foundation Saint-Simon.

Together, they staged the «peril Le Pen», so that many electors who are strongly opposed to Macron nonetheless voted for him for fear of a possible victory by the «foul beast».

Since there was little for which they could blame Marine Le Pen, they accused her of the crimes of her father… and many others.

This manipulation shows that in our «showbiz society», form is more important than content.

Indeed, what are the characteristics of fascism?

The end of the class struggle, thanks to corporatism, which unites bosses and workers in the same organizations, the end of the right-left dialectic thanks to a unique party, and consequently, the end of all opposition by the use of force.

He is supported by all the major bosses of the CAC40, as well as by the CGT.

He does not question the capacity of the right- and left-wing parties to defend the values to which they claim to adhere, but calls their leaders to join him in his party to defend their common interests.

There can be no doubt that if the general elections go the way Macron hopes, the destruction of the opposition will begin.

Indeed, the unanimous support of the written Press for candidate Macron, and the campaign against dissenting Internet sites, give us a taste of things to come.

History repeats itself – in 1940, the French supported Philippe Petain in order to preserve themselves from Nazism, but it was Petain who installed fascism.

In 2017, they voted for Macron in order to preserve themselves from fascism, yet he will be the one who installs it.

It’s true that some electors were disturbed both by the unusual personality of the candidates and by a wealth of propaganda methods which have never been used in Europe since the Second World War.

At the age of 15, Emmanuel Macron had a sexual relation with his drama teacher, who was 23 years older, moved in with her, and then married her 15 years later.

Marine Le Pen inherited the presidency of her party from her father – she first of all cleaned it up, and then excluded him from it.

In psychoanalytical terms, Macron married his mother, and Le Pen killed her father.

Above all, Emmanuel Macron’s team did not hesitate to accuse his rivals of the worst forms of treason, without any logic, certain that the local and national Press – which it already controls in its entirety – would not dare to express the slightest criticism.

The right-wing candidate, François Fillon, is now perceived as a thief, although not one of the accusations leveled against him has been verified.

Marine Le Pen is considered to be the incarnation of fascism, although she has never supported the positions with which she is charged.

As soon as his election was announced, President Macron gave a short speech from his campaign headquarters – a string of platitudes pronounced with the ponderous demeanor of a man who has suddenly felt the weight of his responsibilities descend upon his fragile shoulders.

Then he offered himself a new moment of theater with his supporters in the courtyard of the Louvre.

He crossed Paris in a procession of limousines with tinted windows.

He took a long, solitary, inaccessible walk across the courtyard of the Louvre to climb onto the podium which had been built in his honor.

There, at the base of the pyramid, like Bonaparte, he delivered a new speech, once again consisting of verbiage, but this time in a frenzied tone — a man who has never seen combat.

Finally, he gathered together with his family and a few militants to sing La Marseillaise.

Contrary to all his predecessors, at no time during this evening did he shake any hands.

No-one was ever allowed to approach him.

He allowed none of the political personalities who had supported him to appear alongside him and share his victory.

They will only be able to collect the bounty of the betrayal of their respective parties by betraying them again and supporting him during the general elections in June.

It will only be when President Macron has a firm grasp on all the reins of power that he will allow France to wake up.

It will be too late.