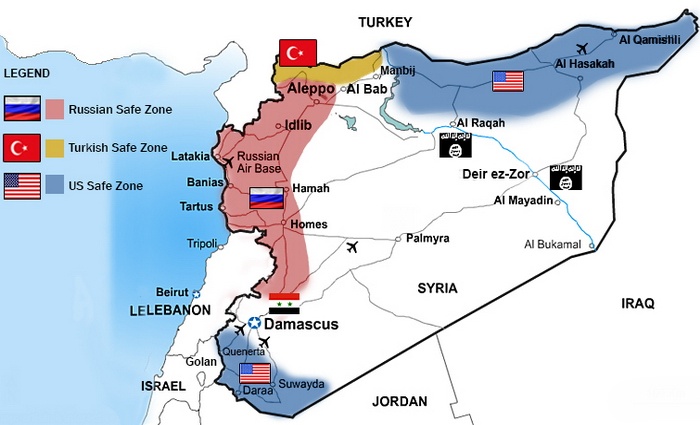 What are the chances of success regarding the Russian-Iranian-Turkish agreement to establish «tension relief zones»?

Why do they avoid the more precise «safe areas»?

Will the armed opposition is going to fight the «Islamic state» and «Al Nusra» alongside the Syrian army?

Why Jaafari welcomed and Alloush withdrew?

The agreement signed by the representatives of Russia, Iran and Turkey in Astana
The agreement provided for the establishment of areas of «easing the escalation» in Syria in implementation of a plan presented by President Vladimir Putin after meeting with Turkish President Recep Tayyip Erdogan and receive a call from US President Donald Trump that might establish a real and effective «Road map» to annihilate the «Islamic state» and the «Sham Liberation Organization» and stabilize the ceasefire and restore life to Geneva system to reach a political solution, if it was committed to and apply it laterally, although there are doubts than prevent us from being over optimistic, given notice to what happened to similar agreements.

The three countries, Russia, Iran and Turkey, are the decision makers on Syrian soil, because they are fighting a proxy war with each other.

This agreement is a practical application for the establishment of «safe areas» in four Syrian regions, namely Idlib, Damascus, Daraa and Rastan in Homs, but due to the expression of «safe areas» raises sensitivities for some Syrian parties, especially the government in Damascus and their Iranian allies, on this expression, replace it with the formula «easing tension zones», but one meaning, minor differences, in the eyes of many.

The main point in this document in our point of view is that the three states that are guarantors of this agreement must help the Syrian government forces and the armed opposition to organize and support the armed forces and those who follow them, as well as the formation of a working group to establish the safe areas within five days.

This paragraph means that the «moderate» armed factions are to participate in the meetings of the Astana system in the organizational battles of the Islamic State and the Sham Liberation Organization, together with the Syrian armed forces and with the support of Iran, Russia and Turkey.

This is a major political and military coup in the Syrian crisis.

The «Jayish Al Islam» led by Mr. Mohammed Alloush began to apply this paragraph before going to Astana, when they fought bloody battles against the «Al Nusra front» in eastern Ghouta over the last days, in bloody clashes that killed more than 400 people from both sides and wounding hundreds and it’s still continues, with the failure of all the mediations to stop it.

Dr. Bashar al-Jaafari, the head of the Syrian negotiating delegation, immediately rushed to congratulate this agreement, but the delegation of the armed opposition and its president, Mr. Alloush, missed the signing ceremony and withdrew angrily from the closing session in protest against the presence of Iran among the guarantor countries, signing the agreement and participating in the forces that will encourage the application on the ground, but there are other added important reasons, which are fighting in the trench of the Syrian army, or on his side, against the Al Nusra Front, which was the ally of many of these factions first and the absence of a parallel political path to ensure the implementation of the political transition of power.

It’s not the first time that the armed opposition delegations have withdrawn and we don’t think it will be the last.
They’ve been very reluctant to take part in the Astana 4 meeting, but the intervention of General Hakan Fidan… The head of Turkish intelligence was able to bring them back to the conference room and participate in the negotiations.

The agreement is not perfect, and we agree with President Recep Tayyip Erdogan, who elaborated during his meeting with President Putin in Sochi, Russia, that he may achieve more than 50 percent of the solution to the Syrian crisis if it’s successfully implemented and the commitment of all parties to its terms because it will provide a safe and voluntary return of tens and possibly hundreds of thousands of Syrian refugees, to provide immediate relief and medical assistance and most importantly, to immediately cease fire and end bloodshed and improve the humanitarian conditions of millions of Syrians in the four areas.

The chances of success of the agreement are reasonable, because the alternative options are disastrous and the Syrian people are looking forward to end bloodshed and breathing after six years of killing and destruction.

At the same time, however, the chances of «sabotage» are in. With the existence of many forces have been marginalized, in this agreement, that may try, through its men and funds, to breach the bottom of the ship, and exercised the same role in previous agreements…