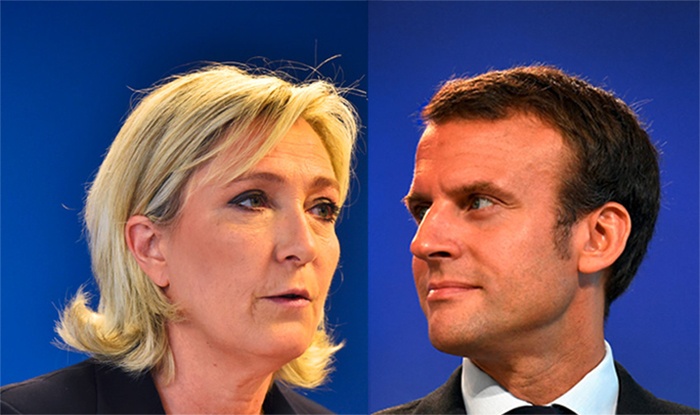 France’s presidential rivals, centrist Emmanuel Macron and the far-right’s Marine Le Pen, go head-to-head on Wednesday in a televised debate in which sparks are sure to fly as they fight their corner in a last encounter before Sunday’s runoff vote.

Opinion polls still show Macron, 39, holding a strong lead of 20 points over the National Front’s Le Pen with just four days to go to the final vote, in what is widely seen as France’s most important election in decades.

Voters are choosing between Macron, a strongly Europe-minded ex-banker who wants to cut state regulations in the economy while protecting workers, and Le Pen, a eurosceptic who wants to ditch the euro currency and impose sharp curbs on immigration.

Macron finished only three points ahead of Le Pen in the first round on April 23, but he is widely expected now to pick the bulk of votes from the Socialists and the center-right whose candidates were eliminated.

Though Le Pen has a mountain to climb to catch Macron, the 2017 campaign for the Elysee has been packed with surprises, the exchanges between the two have become noticeably sharper and the 48-year-old National Front veteran has shown she is capable of catching him out with clever public relations maneuvering.

Macron warned he would not pull his punches in Wednesday night’s televised encounter against a rival whose policies he says are dangerous for France.

«I am not going to employ invective.

I am not going to use cliches or insults.

I’ll use hand-to-hand fighting to demonstrate that her ideas represent false solutions», he told BFM TV.

Le Pen, who portrays Macron as a candidate of high finance masquerading as a liberal, said: «I shall be defending my ideas. He will be defending the posture that he has adopted».

«His program seems to be very vague, but in reality it is a simple continuation of (Socialist President) Francois Hollande’s government», she said in an interview with Reuters on Tuesday.

In that interview she reaffirmed she wanted to take France out of the euro and said she hoped the French people would have a national currency in their pockets within two years.

An Elabe poll for BFM TV and L’Express published on Tuesday showed Macron winning 59 percent of the votes in the second round versus 41 percent for Le Pen. Other pollsters have consistently shown roughly the same figures.

Commentators said Wednesday’s debate could still have an influence, particularly on potential abstainers, many of whom voted for the candidate of the hard left who came fourth in the April 23 first round.

«What he (Macron) has to do it to convince the people who didn’t vote for him (in the first round) and who do not agree with his program that they will be respected», said one outgoing government minister, speaking on condition of anonymity.

The final face-to-face debate between rivals in a French presidential election, aired live, is a ‘must-watch’ event across the country, when the candidates take the gloves off to land whatever punches they can.

Some clashes have entered into political legend.

Valery Giscard d’Estaing, a center-right candidate, famously bested the Socialist Francois Mitterrand in 1974 when the latter referred to «a matter of heart» when discussing an economic point.

Giscard d’Estaing hit back saying «You don’t have a monopoly on the heart, Monsieur Mitterrand» — a phrase which stuck and which he later said helped his victory over the Socialist in what was an extremely tight contest.

In 2002 conservative Jacques Chirac, then the incumbent in the Elysee, refused to debate with Jean-Marie Le Pen, father of Marine Le Pen, after the National Front’s founder unexpectedly got through to the second round.

Chirac said no debate was possible «in the face of intolerance and hate», a reference to Le Pen’s policies and thinking, which were considered to be xenophobic.