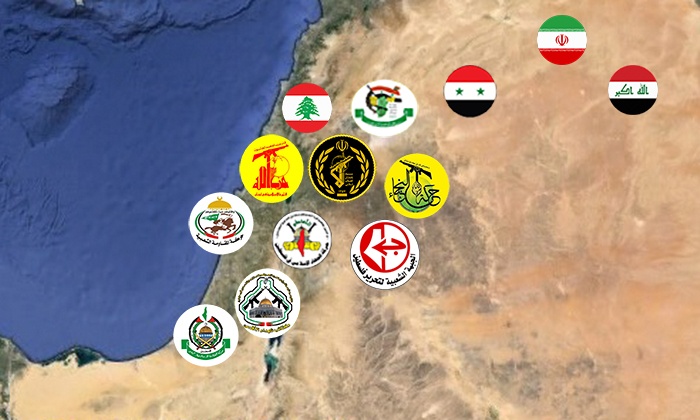 Is the war between Hezbollah and Israel is imminent?
Will the Golan be the focus?
Will the iron dome intercept 2000 rockets a day?
What if Israel strikes Syria again?
Will there be a response?

Those who follows the Lebanese and Israeli newspapers these days and view the political dialogues on the television stations on both sides have a firm impression that the war between Israel and Hezbollah is imminent and that most of the indicators and analyzes of senior military analysts, generals, are in this direction.

These expectations were further exacerbated by the fact that Hezbollah organized a tour a few days ago of dozens of Lebanese and foreign journalists in southern Lebanon in an unprecedented precedent, during which the party’s members showed their full gear and weapons from a valley few meters from the border with occupied Palestine, as a clear message saying that the party «takes» the Israeli threats of war with absolute seriousness.

The right-wing Israeli newspaper «Jerusalem Post» revealed a few days ago that a plan to evacuate hundreds of thousands of Israelis living in the Galilee near the border in Lebanon was being prepared for war.

Israeli academic circles believe that with the arrival of Donald Trump’s to the White House with his unlimited support for Benjamin Netanyahu, and mobilization Arab countries including Egypt, Jordan and the Gulf States to form a «Middle East NATO» against Iran, may raise the level of concern, and accelerate the outbreak of war with Iran.

Israeli military experts confirm that Hezbollah has more than 100,000 rockets of various sizes and dimensions, and that in the event of war, the party will launch an average of 2,000 rockets per day targeting the Israeli depth, compared to 150 rockets a day in July 2006 war.

The Israeli leadership considers Hezbollah more dangerous than ever after its strength and combat experience, and its arsenal of newer rockets, which doesn’t rule out a pre-emptive strike that reduces its losses and regains prestige for the Israeli army after losing it in the recent Gaza Strip wars, and in Lebanon in 2006.

The theory of hawks beating the drums of war says that this pre-emptive strike is necessary before the party has greater offensive capabilities, and because of its current preoccupation with the Syrian war.

Moreover, Israel’s losses may now be less than in the event of war a year or two or three years away.

What concerns Israel the most is the fact of Hezbollah and the Iranian Revolutionary Guards forces «expand» in the Syrian south and opening the Golan front.

There are about 25,000 Iranian fighters currently in Syria, including the Revolutionary Guards and militias from Pakistan, Afghanistan and Iraq, which they might turned to be fighting arms for Hezbollah.

And that what explain the assassination of Samir Kuntar, the dean of the Arab prisoners in Israeli jails, and Jihad Imad Mughniyeh, who were planning with Iranian Revolutionary Guards experts to revive this front.

The threat that was issues by Sayyed Hassan Nasrallah in many of his speeches recently that to hit the stores of the poisonous ammonia gas in Haifa and the Dimona nuclear reactor and the gas wells and its sea bases in the Mediterranean is not only part of the psychological war, but also a reflection of the increasing confidence of the commander of the southern resistance, to bring fear to the hearts of the Israelis.

Bombing an arms depot that was said, that it belonged to Hezbollah near Damascus airport last week with several Israeli missiles may pose a challenge to Russia and Hezbollah, an embarrassment to the Syrian leadership and an attempt to force it to respond in the same way as after an Israeli air raid on Hezbollah’s arms convoy near Palmyra.

The situation on the Lebanese and Syrian fronts is ripe for war with the current state of calm may not last long, especially since the next war in case of ignition will not be against Hezbollah, but rather a prelude to a war against Iran and its axis, whose military and ideological belt stretches from Mazar Al-Sharif in western Afghanistan to the Lebanese shores of the Mediterranean.

All the Iron Domes will not be able to intercept 2000 missiles that will be done like a rain on all Israeli cities and settlements in the occupied Palestine, perhaps the situation will be much more severe if «Hamas» movement and the other militant factions (such as Jihad, the Public Front and the Public Resistance Committees) join this war and unleashed theirs missiles arsenal it hit Israeli targets in the south, with this War if it’s started, it will be the Mother and the Father of all wars and perhaps the last one, with the victory of the Arabic and Islamic side in it will be possible more than any time before, for very simple reason which is the fact that who represent the Arabs and Muslims are not ordinary «Fat Bellies» armies, but a resistance and believer groups that looking for martyrdom.

It’s the war that could reunite the Arab and Islamic nations and ends the state of division and the relentless attempts to turn Israel from foe to friend.

There is no cause that unites and not divide other than the Palestinian cause and the days are between us.