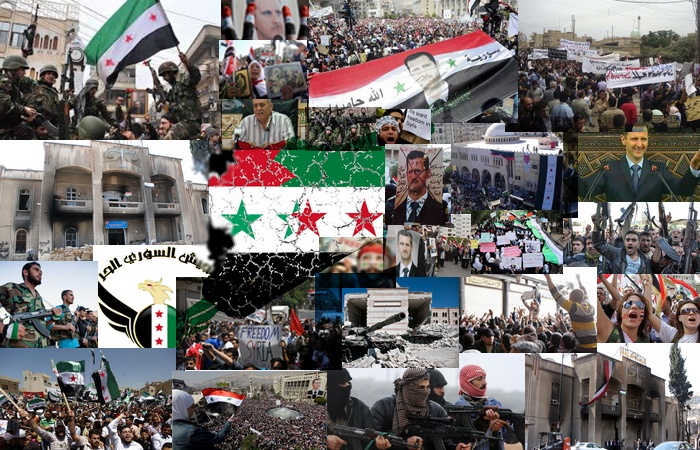 The movement began in Syria on March in the same month that the Baath party in Syria came to power in March 1963.

After several attempts to ignite the situation in Syria, the work succeeded in Daraa which ignite the 185,000 square kilometer heap of hay dipped with fuel.

Despite being Assad’s cousin, but Najeb Also were very corrupted & overstepping limits of authority for long time.

He was punched several times by the Late President Hafez Al-Assad & his late son Basil due to many overstepping limits of authority & misbehavior incidents.

Daraa as tribal area with many figures are historically till this day are important members in the Syrian Ruling Baath party & the government in general.

Why do you appoint such people in very delicate position & not punch them publicly & put some trust on the people in Daraa & fight more to remove any excuses that may help foreign conspiracy that is already been planed & just waiting for the right time to start this conflict.
Some young boys drawing & writing on walls, no matter what these young boys wrote should’ve been dealt with that way.

There is no doubt that there is a planning & a plot that was prepared & fabricated against Syria for long.

That’s what been described in our story at the early episodes, but the problem is how the Syrian government dealt with this matter.

Before I elaborate, I must admit that the Syrian government bears a lot of responsibility for what happened from both points of view.

The government has failed to protect the people & protect the country’s resources & misbehaved & they didn’t understood the reality of what is happening, only in a late period after things got worse & by one way or another almost out of total control, with allowing unleashing the instincts to deal with the situation & showed discrimination & sectarianism in its ugliest face, with the reaction to the violence that is taking place on the ground between the people of the same country, at a time when it was necessary to deal with what happened with much wisdom & sanity.

Syria got involved in the Lebanese Civil war & played a major role to ended it, but it seems to me they didn’t took it as a lesson, that what happened in Lebanon with civil war that controlled by sectarianism, which have many similarity to the Syrian society.

Her answer was largely diplomatic & she replied that each had its own way & time, with pointing that they both would’ve been do the same.

With all due respect to Dr. Shaaban, there is a big difference in dealing & I understand that this is a difficult question to answer from her position impartially, objectively & the distinction with preference between the way of the father & son.

I can say that first, it didn’t meant to happened period, but if it happened during the father’s era, we wouldn’t have reached what we have today.

Frankly, the late President Hafez Al-Assad was the most capable of solving the crisis quickly by using force & justice together.

He’d have take some fast measures to control the situation in manner with punishing the abusers whoever they were & used force in different way completely, with knowing that would never appoint them in their position to begin with.

The truth is that President Assad has come back to deal with the crisis similar to his father’s way, but due to late period there was so limited actions that could’ve been done which the circumstances didn’t allow him to take only a small part of measures, only the rely on Russia in particular remains the best thing that he done which showed its effectiveness & change the situation completely on the ground.

Relying on Russia, also remain not a favor that been offered by the Russian, because the Russian leadership knows for sure, that after the Syrian regime fall, Iran & Russia will be next.

Russia knows that, the majority of extremist terrorists that are fighting in Syria are from Russia & the former Soviet Union countries which they are Russia’s responsibility with the fact that all of those fighters will go next to Russia to fight after the mission in Syria being accomplished.

Also in economics, if the Qatari natural gas pipeline project was done & the game of oil prices been done at the same time Russian economy will fall & the revolution of many ethnic groups in Russia will be unleashed.

Russia’s first & most important defense line is Syria & they have to maintain it on any price.

The Syrian army was destroyed for the fourth time in fifty years.

The first was after the 1967 war, the second after the 1973 war, the third in Lebanon war, from 1976 till 1990 with the direct confrontation with Israel took place during the Israeli invasion of Lebanon in 1982 with the Syrian military presence in all the hostilities of the Lebanese civil war that lasted more than fifteen years.

The Syrian Crisis, which is entering its seventh year.

In the current war, the Syrian army lost more than what had lost in all previous wars combined.

The Syrian economy was systematically destroyed, after it was moving towards an important development.

All the achievements that have been made in Syria over a long period of time have faded one by one & I fear that the collapse of the Euphrates dam is the last nail in the coffin of modern Syria, although this is a symbolic matter.

Everyone knows what has been waged against Syria for years & everyone including the Syrian leadership, saw what happened around them in the last decade.

«We will bring Syria back to Stone Age», that what Avigdor Lieberman said in 2010.

What bothers me the most, is the fact that the Syrian President Bashar Al-Assad said a very wonderful sentence in his early speeches when he became President & had a very nice phrase, «The man must be effective & not ineffective» with that «the ruling Baath party in Syria has become subservient to the renewal & development & its urgently require fundamental reforms».

What Assad was saying in the early days of his rule was that man is an initiator & that his decisions are based on planning & thinking, not based on reactions.

In other words, I don’t have to wait for the disaster to happen then I’ll begin to act.

Unfortunately, this is what Assad did, at least in the beginning of the crisis.

The Son should’ve been declare a new «corrective movement» once he came to power, just like his dad.

He was waiting for the disaster to happen & then he began to act, knowing that the issue of Syria being exposed to something was equipped with different scenarios for long time, as been described at the previous episodes of our story.

The weapons began to leaking inside Syria with money pumped very heavily.

Many people were bought or exploited, or being played with their personal emotions & accumulated hatred from past mistakes or incidents.

All those hostile to the Syrian regime were mobilized to the extent that the Syrian Muslim Brotherhood was allied with their opponents of former politicians & statesmen in Syria, all for the sole purpose of overthrowing the regime in Syria.

It began to carry out large activities inside Syria, to name but a few, all these tunnels, that been used by opposition armed groups in many areas in Syria with many of them are in Damascus & its country side where the strong hold of the regime is.

How much time, men power & noise take to dig these tunnels?

What machines or tools & the size of them are required to dig these underground tunnels?

Where they came from & how they arrived in Syria & those who finance & provide assistance & all that man power, how this was done with many other things.

Where the Syrian many security services bodies & branches were from all that?