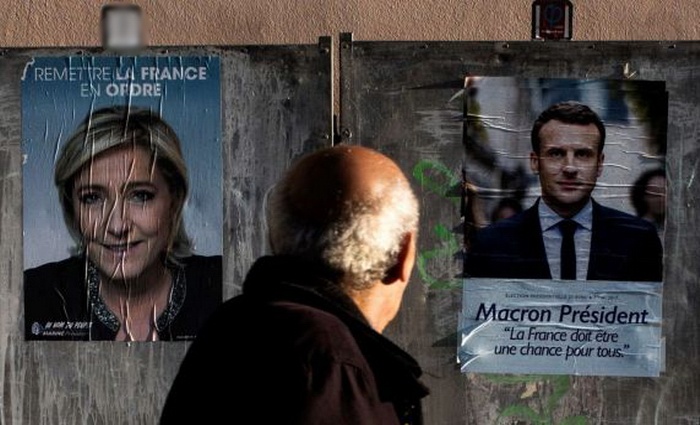 We are witnessing an historical reversal in France, where the ancient political spectrum is exploding into pieces as new fractures appear.

Because of the intensive storm of media propaganda which has recently almost drowned the nation, the French can now perceive nothing more than the essential markers, and cling to red lines which no longer exist.

However, the facts are clear, and certain evolution are predictable.

After a very agitated electoral campaign, the French chose Emmanuel Macron and Marine Le Pen for the second round of the Presidential election.

Already, almost all the losing candidates, with the exception of Jean-Luc Melenchon – and that’s no accident – have appealed to their followers to support Macron, who should then be easily elected.

The two major historical parties which have governed France since the beginning of the Fifth Republique — Les Republicans (ex-Gaullists) and the Parti Socialist (ex-Jaurèsians) — have been beaten. A newcomer, En Marche !, has made it to first place on the podium, facing the Front National.

Is there fascist candidate?

This is not the first time that this sort of cleavage has occurred in the history of France – on one hand, a partisan of an alliance with what seems for the moment to be the world’s greatest power (the United States), and on the other, a movement seeking national independence – on one hand, the totality of the ruling class, without notable exceptions, and on the other, a party cobbled together of various bits and pieces, composed mostly of proletarians, two thirds of whom come from the right wing and one third from the left.

Evidently, the next French President will be Mr. Macron – a man from the Banque Rothschild & Cie, now supported by the totality of the business leaders of the CAC40.

However, whether our prejudices like it or not, the unanimity of the power of money is the fundamental characteristic of fascist parties.

This unanimity of Grand Capital is always accompanied by a National unity which erases the differences.

In order to become equal, we must become identical.

This is what President Hollande began with the law «Marriage for all», in 2012-13.

Presented as establishing equality between citizens, whatever their sexual orientation, it posited de facto that the needs of couples with children are the same as those of gay couples.

And yet there were several other more intelligent solutions.

The opposition to this law led to a number of very important demonstrations, but they unfortunately failed to provide any other proposition, and were sometimes mixed with homophobic slogans.

Identically, the attack against Charlie-Hebdo was celebrated to the chant of «I am Charlie !», and those citizens who declared that they were «not Charlie» were prosecuted.

It is a shame that the French people do not react either against the unanimity of Grand Capital, nor against the injunctions to use the same judicial techniques and to favor the same slogans.

On the contrary, they insist on considering the current Front National as «fascist», with no other argument than its ancient past.

Can a fascist candidate be resisted?

In the majority, the French think that Emmanuel Macron will be a President à la Sarkozy and à la Hollande, men who will pursue their political beliefs.

They therefore expect to see their country increasingly decline. They accept this curse, thinking that in this way, they will evacuate the menace of the extreme right.

They focused on the figures of a few men who had collaborated with the Nazi occupier, without seeing that the Front National of today has absolutely nothing in common with those people.

They persist in holding Second-Lieutenant Jean-Marie Le Pen (Marine’s father) responsible for the Algerian tragedy, and exonerating from their responsibilities the Socialist leaders of the time, particularly their dreadful Minister of the Interior, François Mitterrand.

No-one remembers that in 1940, it was a Fascist minister, General Charles De Gaulle, who refused the shameful armistice with Nazi Germany.

This man, the official heir apparent of Marechal Philippe Petain (who was his daughter’s godfather), charged into the Resistance alone.

Struggling against his education and his prejudices, he slowly gathered around himself, against the wishes of his ex-mentor, French people from all horizons to defend the Republic.

He linked up with a left-wing personality, Jean Moulin, who, a few years earlier, had secretly embezzled money from the Minister of the Marine, and trafficked weapons with which to support the Spanish Republicans against the fascists.

No-one remembers that a colleague of De Gaulle, Robert Schuman, wrote his signature on the armistice of shame, then, a few years later, founded the European Economic Community (currently the European Union) – a supra-national organization based on the Nazi model of the «New European Order», against the Soviet Union and today against Russia.

Emmanuel Macron has received the strong support of ex-US President Barack Obama, and has gathered a team for foreign policy composed of the main neo-conservative diplomats.

He makes no secret of supporting the external politics of the US Democratic Party.

Barack Obama, although he presented his foreign policy with a rhetoric which was diametrically opposed to that of his predecessor, the Republican George W. Bush, in practice followed his lead in all points.

The two men successively continued the same plan for the destruction of the societies of the Greater Middle East – a plan which has already caused more than 3 million deaths.

Emmanuel Macron supports this policy, although we do not yet know whether he intends to justify it by speaking of «democratization» or «spontaneous revolution».
If Hillary Clinton was beaten during the US election, Emmanuel Macron had to be elected in France.

Nothing proves that Marine Le Pen will be capable of playing the role of Charles De Gaulle, but three things are certain:

Just as in 1940, the British, choking back their disgust, welcomed De Gaulle to London, today Russia could support Le Pen.

Just as in 1939, only a few Communists braved the orders of their party and joined the Resistance, there will only be a few of Jean-Luc Mélenchon’s partisans who will take that step.

But as from the Nazi attack on the USSR, it was the whole Communist party who supported De Gaulle and formed the majority of the Resistance.

There is no doubt that in the years to come, Mélenchon will fight side by side with Le Pen.

Emmanuel Macron will never understand people who resist the domination of their homeland.

So he will not understand any better the people of the Greater Middle East who struggle for real independence alongside Hezbollah, the Syrian Arab Republic and the Islamic Republic of Iran.