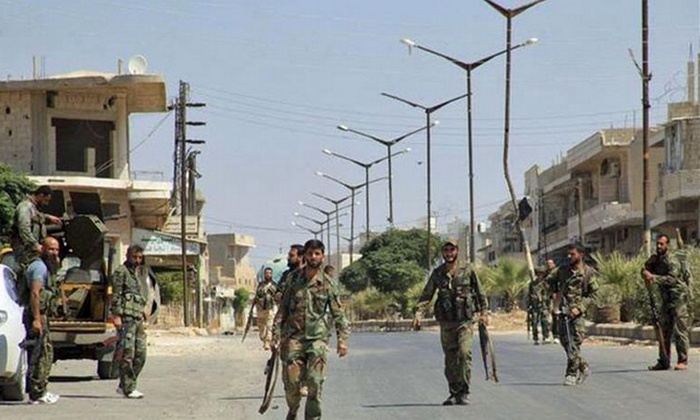 The Syrian army and allied forces advanced against rebels in western Syria near Hama city on Sunday, building on recent strategic gains in the area, a military source and a monitoring group said.

Government forces captured the town of Halfaya and nearby villages, they said, taking back territory that rebels seized last year from forces loyal to President Bashar Al-Assad.

«We gained control of Halfaya and several hills in the area», the Syrian military source said.

«The army will of course continue its fight».

Boosted by Russian air strikes and Iranian-backed militias, the Syrian army has pushed into rebel areas north of Hama, expanding its control this week along the western highway that links Damascus and Aleppo.

Rebels confirmed the town had fallen after several days of relentless air strikes by jets from Russia and Syria which are accused of a «scorched earth policy» that uses phosphorus and incendiary bombs on civilian areas.

«Russian jets had intensified their bombing ahead of the ground offensive the regime launched.

Warplanes have pounded Halfaya and swathes of territory near the highway in a region vitally important to Assad’s government, which has shored up its rule in the populated west of the country.

Rebel factions, spearheaded by jihadists from the former al-Qaeda affiliate and also including Free Syrian Army groups, have been fighting fiercely to defend the towns in recent days.

The army’s earlier capture of Soran, its northern gateway to Hama city, meant it had reversed most of the territorial gains rebels made in their major offensive last month.

With the help of its allies, the government has gained the military upper hand in the six-year war against the wide array of rebels, including some groups supported by Turkey, the United States and Gulf monarchies.