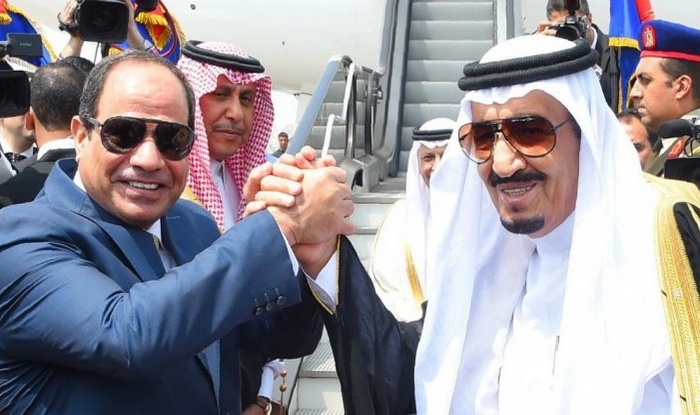 Despite Sisi’s visit to Riyadh and talk of a renewed alliance, Cairo still balks at Saudi policy on Syria, Iran and Yemen

If anyone can take credit for the sudden ‘improvement’ in relations between Egypt and Saudi Arabia — after a year of high tensions and hostile media campaigns — it is Donald Trump.

The new US president wants the two countries to be pillars of a Sunni Arab alliance that takes the lead in the region and deals with its trouble-spots such as Syria, Yemen and Iraq, while — most importantly — confronting Iran’s rising political and military influence in the region, and perhaps also addressing the Palestinian issue on Israeli/US terms.

Egyptian President Abdelfattah Al-Sisi’s just-concluded visit to Saudi Arabia on can be seen as the first fruit of this American wish, or plan.

His talks there were dominated by the issues of Syria and Iran rather than financial and economic affairs, unlike his previous seven trips to Riyadh, five of them since King Salman assumed the throne a couple of years ago.

Trump is said to have made his unhappiness with Saudi Arabia’s ‘punishment’ of Egypt plain when he met with the monarch’s all-powerful favorite son, Deputy Crown Prince Muhammad Bin-Salman, in Washington last month.

He is reported to have berated him and urged him to immediately reinstate the five-year agreement under which Saudi Arabia provides Egypt with cut-price oil, which Riyadh had suspended some six months earlier.

The suspension was partly due to the blocking by Egyptian judges of Sisi’s deal with Salman under which the Red Sea islands of Tiran and Sanafir would have reverted to Saudi sovereignty.

The Egyptian courts ruled that the islands were Egyptian and could not be ceded.

It is unlikely that either side wants this issue – which is highly sensitive for both the Egyptian and Saudi publics, each from their own perspective – brought up again at this juncture.

Sisi, who was accompanied by a bevy of ministers and experts from the central bank, is certainly seeking more Saudi financial aid and investment.

But he cannot have high hopes.

The Saudi treasury is burdened with foreign and domestic debt, reduced oil revenues after the fall in prices, and the depletion of its financial reserves by around half to $400 billion.

The kingdom also had to promise to invest $200 billion in infrastructure projects in the US during Muhammad Bin-Salman’s visit in order to appease Trump, yielding to his extortion.

And King Salman’s recent six-country Asian tour featured the signing agreements to invest $65 billion in China, another $16 in each of Indonesia and Malaysia, and some millions in Jordan.

What is new is that the emphasis in Sisi’s discussions with Saudi leaders was not on aid and investment but on regional affairs.

US Defense Secretary James Mattis, who held top-level talks in Cairo and Riyadh a few days ago, reportedly proposed a plan for resolving the Syrian crisis that the Egyptian and Saudi leaders was supposed to discuss in Riyadh.

But the Egyptian regime, unlike the Saudi regime, is opposed to toppling the Syrian regime.

It refused to join the US and Saudi Arabia in accusing Damascus of the Khan Sheikhoun chemical attack earlier this month, instead calling for an impartial international inquiry.

It remains to be seen whether Sisi’s visit to Riyadh will bring the Egyptian position on Syria closer to the Saudi one, or whether Egypt will stick to its strategic stance of opposing regime-change in order to avoid replicating what happened in Libya, Yemen and Iraq.

On Iran, Sisi alluded to Iranian meddling in Arab affairs in his speech at last month’s Arab summit in Amman, in what was seen as a sop to the Saudis, but did not refer to Iran by name.

Riyadh, in contrast, loudly trumpets its hostility to Iran and is engaged in an all-out effort to rally Sunni Arabs against it.

So, will Sisi adopt a harder line against Iranian after his visit to Saudi Arabia, thereby inaugurating the Sunni alliance which Trump hopes for against Iran and its so-called Shia Crescent?

On Yemen, Egypt has so far resisted pressure to do Saudi Arabia’s bidding.

Egypt’s refusal to send ground forces to take part in the Saudi-led war there was the real underlying reason for last year’s deterioration of relations between the two countries.

Sending troops to fight in an unwinnable war in Yemen on behalf of the Saudis is a red line not just for the Egyptian public but also the military establishment.

It still recalls the loss of over 20,000 troops in the Yemen war of the 1960s, which hemorrhaged Egypt’s coffers as well as its army and played a major role in its 1967 defeat by Israel.

The orchestrated reconciliation between Sisi and King Salman at the Amman summit does not change this.

Only last week, a claim by Saudi military spokesman Ahmad Al-Asiri that Egypt had offered to send 40,000 troops to take part in the Yemen war caused outrage in Egypt, forcing a strong denial from Cairo and a retraction from Riyadh.

Yet all the signs point to military escalation in Yemen in the coming few months.

Reliable sources say the Trump administration has given the Saudis a six-month deadline either to achieve decisive victory or sue for peace in a war which, when launched over two years ago, was expected to last only a few weeks.

Could financial inducements tempt Sisi to step up Egypt’s contribution beyond the aircraft and naval deployments already deployed?

We may be about to witness a change in the way Saudi Arabia behaves towards Egypt: less of the arrogance and high-handedness that characterized the recent past and of treating the country as a supplicant.

Both countries may have learned lessons from the year-long chill in their relations. It is too early to tell.

But there is a definite scent of something being cooked up by Saudi Arabia and Egypt, under American supervision, relating to Yemen, Syria and Iran.