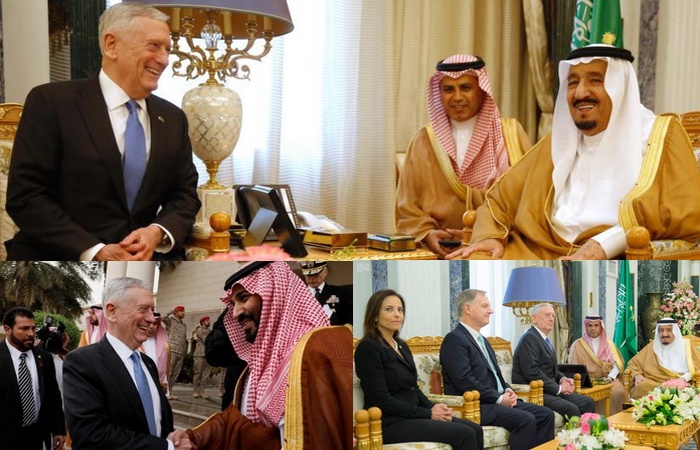 The tour of US Defense Secretary Jim Mattis in the Arab region, and the Saudi one in particular, reveals that the new US administration is scamming the Arabs by offering them the statements that they want to hear, especially on the Iranian issue, while the doing the exact opposite on the ground.

«MAD DOG» General Mattis and during his meeting with the Saudi King Salman, said he would attack Iran as it works to destabilize the region and his country will confront Iran and stands against their efforts and prevent them from success.

He said in a single letter to the Saudi monarch: «Wherever you look in the Middle East, where there are problems, there is Iran».

Such statements will for sure please The Saudi King and his son, the defense minister, with the heir, the crown prince, Mohammed bin Salman, however on the other hand the US administration, represented by the Secretary of State Rex Tillerson, told the Congress completely different and contradicted of what General Mattis said.

the US Secretary of State Rex Tillerson, says in a letter sent to the head of Congress Paul Ryan on Tuesday, and insured that the US administration is «in the process of conducting a review to see whether lifting of the sanctions against Iran is in the interest of US national security» and stressed in the letter that «Iran remains committed to the Nuclear agreement and its terms that was reached in 2015» but added that «there are concerns about its role as a state that sponsor terrorism».

This message reflects a US retreat from all the threats posed by «candidate» Trump to cancel the nuclear agreement and reflect the desire, or intentions to lift economic sanctions on Tehran.

The Saudi officials wanted more hawkish American stance towards Iran, as well as actual support in the war that they waged in Yemen two years ago, but the US Secretary of Defense didn’t abide by any position in both cases and he talked only about the need to start negotiations under the auspices of the United Nations to work for end this conflict in available time.

This duplicity of US positions is not new thing and this hypocrisy aimed just to demand more billions of US dollars from the oil gulf countries as much as possible which is way that the United State Always used to do by creating demons to intimidate the rulers of the Gulf and then sell the Gulf States weapons with billions and asked for additional funds for the supposed protection services provided by the United States to them, which was explicitly expressed by the US President Donald Trump.