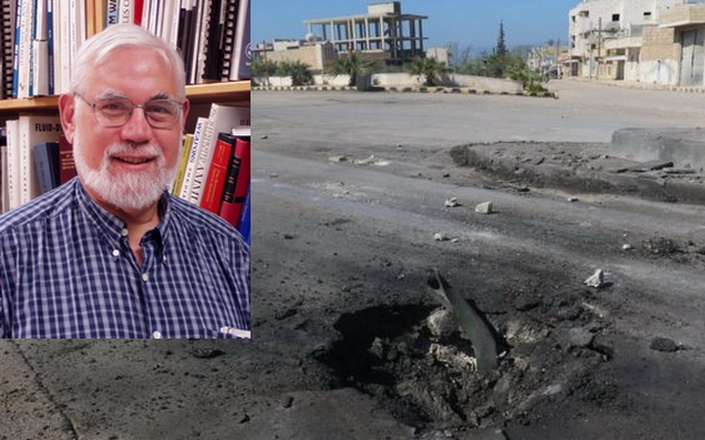 The American Professor Postol theory, which confirmed that the chemical bomb of Khan Shaykhun were not fired from the air confuses the Syrian scene and the talk now about «fabrication» ..

What is this theory?
What are the facts about it?
Why the demands of the owner of this theory got approved in order to achieve an impartial international investigation so far?

As of this writing, no international committee has reached the town of Khan Shaykhun, which has seen an air strike carried out by the Syrian air force that may have hit an arms store that turned out to contain nerve-destroying mustard gas, according to the Syrian official version.

Or the airstrike came with chemical head missile, according to the US and the Western and Syrian allies.

The Organization for the prohibition of chemical weapons rejected the Russian -Iranian draft resolution to form new team to investigate the chemical attack, came after a supposed pressure by British and US, while the Syrian President Bashar Al-Assad announced today that his government sent a letter to the United Nations demands to send independent investigation commission, but they didn’t receive any reply, and I don’t think that they will receive one any time soon.

The Russian draft resolution wants the investigation committee to verify that the chemical mustard gas was actually used, and then how it arrived in Khan Shaykhun, and also called on investigators to visit the Shuyrat airport that was bombed by US Tomahawk missiles on April 6 to make sure if there is a chemical weapons in their stores or not.

Professor Theodore Postol, the American expert in chemical weapons, questioned the validity of the US intelligence report that was presented to President Donald Trump, and confirmed the use of chemical weapons by Syrian aircraft to hit Khan Shaykhun and confirmed in an article supported by documents and scientific analysis published in multiple electronic news Websites, that the alleged chemical bomb thrown at Khan Shaykhun cannot be launched from the air, but were present on the ground, and that the Russians officially informed the Americans that the Syrian warplanes would bomb the town 24 hours before, Professor Postol expressed his readiness to go to the stricken town and give evidence and testify, suggesting that there is someone who detonated it on the ground.

The only real fact so far that 86 people were killed in the stricken town, including dozens of children, but cannot know the full facts only after the arrival of an independent commission for investigation includes neutral international experts and provide the results of their research to the UN Security Council, or the Executive Council of the Organization for Prohibition of Chemical Weapons, Or both.

The possibilities of «fabrication» in which the Syria President talked about, alongside his political and information adviser Dr. Bouthaina Shaaban, is not far from truth.

In fact there are many US and Britain antecedents in this field, from Colin Powell the former US Secretary of State admitted on air immediately prior to the 2003 invasion of Iraq that US intelligence had misled him and provided him fake information with forged pictures about Iraqi movable chemical weapons laboratories presented by an Iraqi officer to Dr. Ahmed Chalabi, named Rafid Al-Janabi, which turned out to be a conscripted agent that worked for the CIA, also Tony Blair, the former Prime Minister of Britain, and President W Bush’s partner in the aggression, waved the file of the Iraqi chemical weapons in front of the British parliament, saying that Iraqi President Saddam Hussein’s chemical weapons can be equipped within 45 minutes, with later appeared that the file or «dossier» was empty, and Tony Blair in fact deceived the Parliament.

Dr. Shaaban confirmed in an interview with Al-Mayadeen channel that the Russians informed the visiting Syrian delegation to Moscow a few days ago that President Trump would not repeat the missile strike at Al-Shuyrat base or any other, which means that the US intelligence has prepared and refuted the reasons to justify this strike in order to show the American president as a strong man.

There is an Egyptian saying that says «Water deceives the diver», which means that an independent and impartial international investigation can give us the whole truth, and the disruption of America and Britain to form a neutral commission for its conduct casts doubt on all accounts presented by both sides.

We, and many others, waiting for the formation of this commission, and to provide protection for it, to carry out its investigations in full, and to prepare its final report supported by the documents and irrefutable evidence.

If we believe that this request is almost impossible, We just can stand and ask God to have mercy upon all the innocent Syrian brothers’ victims, despite their stands and no matter whatever weapons that led to their martyrdom.