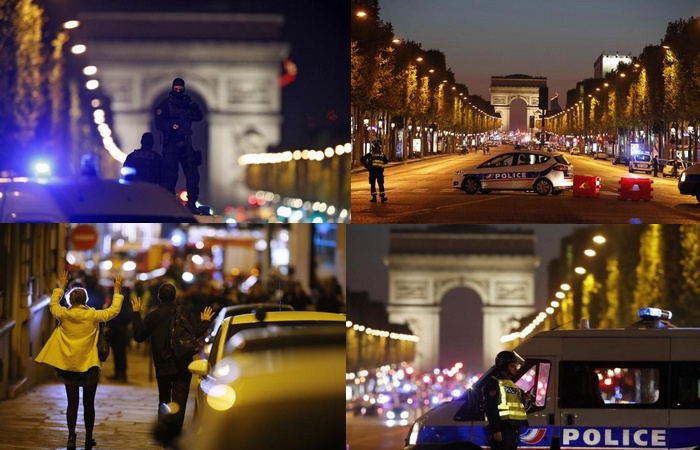 Paris’ Champs Elysees boulevard looked more like a combat zone than the tourist and shopping mecca it is on Thursday night after a drive-up-and-shoot attack in which an assailant killed a police officer with what appeared to be an automatic rifle.

Hundreds of police officers armed with machine guns, helmets or balaclavas and bullet-proof vests swarmed over an area of Paris popular with, but suddenly bereft of, late night shoppers, cafe customers and dance club revelers.

Days before the first round of a presidential election vote on Sunday, the attack, swiftly claimed by Islamic State, followed the arrest in southern France of two men suspected of planning an attack in a country whose jets are bombing the militant group’s strongholds in Iraq and Syria.

Reuters reporters on the scene shortly after the incident said witnesses described a scene of sudden chaos.

«It could have been the end of me», said Chelloug, a kitchen assistant at a restaurant in the killing zone.

He said he hid behind a police vehicle after six shots from what sounded like a Kalashnikov, or AK, assault rifle.

The attack car was an Audi, the witness, who declined to give his full name, told Reuters.

The normally bustling cobbled avenue, famed for its shops, tourist stores and nightclubs and a must-visit zone for tourists, was shut down by police as they made room for ambulances and emergency services shortly after the incident around 1900 GMT.

More than 230 people have been killed in Islamist militant attacks in France since January 2015.

Even though visitor numbers have suffered as a result, Paris tourist sites have mostly been spared from the carnage.

However, in February, a man attacked a soldier with a machete outside the Louvre museum saying he wanted to avenge the people of Syria, and in September last year a group of women whom authorities say had been planning an attack left a car laden with gas cylinders in a side street near Notre Dame cathedral.

On Thursday night, heavily armed police and siren-lit vans occupied most of the tree-lined stretch that links the Seine river, the Place de La Concorde and lower house of parliament to a World War dead-soldiers memorial at the foot of the Arc de Triomphe.

Helicopters buzzed above and armored police toting machine guns ringfenced the area where an interior ministry spokesman, Pierre-Henry Brandet, told journalists one policeman had been shot dead and two colleagues injured before the assailant, who fled on foot, was shot and killed too.