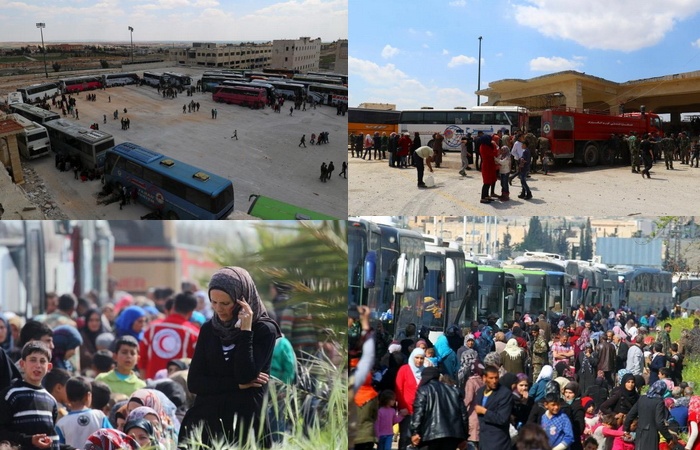 Thousands of people also left the rebel-besieged Shi’ite towns of Al-Foua and Kefraya in Idlib province under the deal.

«Al-Zabadani has become completely empty of militants» who either evacuated or accepted government rule, state television said, broadcasting from the town which had long been under siege by pro-government forces.

State media said around 500 rebels and their families departed al-Zabadani and nearby areas for rebel-held territory in northwest Syria.

The Syrian Observatory for Human Rights said 3,000 people left al-Foua and Kefraya heading toward Aleppo city, which the government controls.

Under the agreement between the warring sides, civilians and pro-government fighters were being moved out of the two Shi’ite towns, in exchange for Sunni rebels and civilians getting bussed out of the towns of Zabadani and Madaya.

The evacuations had been stopped after a bomb attack on a convoy of evacuees from al-Foua and Kefraya on Saturday reportedly killed 126 people, including more than 60 children.

Alaa Ibrahim, governor of the Damascus suburbs, told state television in Madaya that the government would «gradually restore all its services» now that rebels had left the town.

The same would soon happen in Zabadani, he said.

Thousands of Syrians have evacuated mostly besieged rebel areas in recent months under deals between President Bashar Al-Assad’s government and insurgents fighting for six years to unseat him.

Ambulances brought wounded people from the convoy attack into government-held Aleppo and took them to hospital on Wednesday, state media said.

Several people from Al-Foua and Kefraya who were injured in the blast told Reuters they had spent three days in rebel territory, where they received first aid and food, before arriving in Aleppo.

«My face was dripping with blood», said Fatmeh Yassin, 18, who suffered eye injuries from the blast.

«Later, they took us to a hospital around Bab al-Hawa» near the Syrian-Turkish border.

Yassin lost her brother who had been in the convoy with her and «hadn’t heard anything about him in days», she said at a hospital in Aleppo.

Sharif Al-Hussein from Kefraya waited at the same hospital for doctors to check his 6-year-old son.

«There is shrapnel in his eyes because he was sitting at the window of the bus when the explosion happened», said Al-Hussein, who had also received emergency aid in the opposition area near the Turkish border.

«They told us this morning to get ready for the (Syrian Arab) Red Crescent to come get us», he said, «We couldn’t believe it».