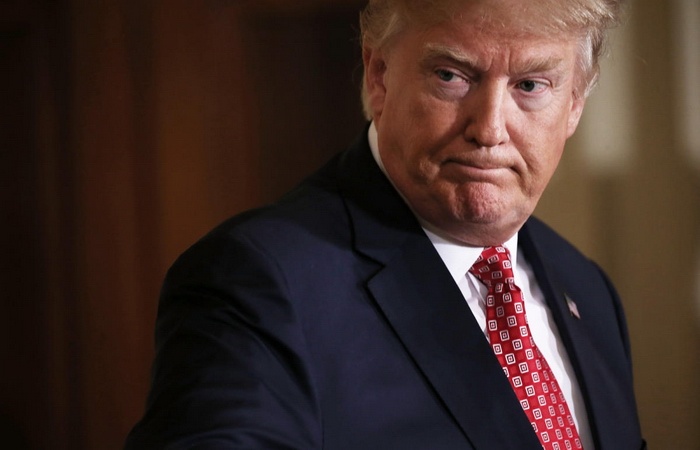 President Trump’s radical change in rhetoric concerning his foreign policy was accompanied by the bombing of an air base in Al-Shuyrat, and that of an Afghan mountain.

The world trembled before the deployment of such force — 59 Tomahawk missiles in Syria and one GBU-4/B3 mega-bomb in Afghanistan.

Yet the base in Al-Shuyrat was already operational again the following morning, while the «Mother Of All Bombs» certainly caused the collapse of three exits of a natural tunnel, but did not destroy the kilometers of underground passages created over time by the rivers within the mountain, in short, much ado about nothing.

These two operations were clearly intended to convince the US deep state that the White House was once again supporting its imperial politics.

They had the desired affect on Germany and France.

Chancellor Angela Merkel and President François Hollande applauded their lord and master, and called for an end to the Syrian situation.

The surprise arrived from elsewhere.

The United Kingdom did not only follow the movement.

Their Minister for Foreign Affairs, Boris Johnson, proposed to levy sanctions against Russia, according to him an accomplice in the Syrian «crimes», and responsible in one way or another for the Afghan resistance and a plethora of other evils.

During the meeting of the Ministers for Foreign Affairs at the G7, Johnson announced the cancellation of his trip to Moscow, and invited all his partners to break off their political and commercial relations with Russia.

However, though approving the British initiative, these partners prudently stayed in the background.

Rex Tillerson, the US Secretary of State, incontrovertibly dismissed this insane proposition and maintained his trip to Moscow.

Brazenly, Johnson then declared that the Europeans had appointed Tillerson to go and talk some sense into the Russians.

Although international protocol states that Ministers are to be received by their opposite numbers, and not by the Head of State, the Atlantist Press presented Tillerson’s welcome by Lavrov as a cooling of Russo-US relations.

Before he had the time to salute his guest, Sergey Lavrov was interrupted by a Washington journalist who took him to task.

Reminding him of the conventions of basic politeness, the Russian Minister refused to answer him and cut the presentations short…

The meeting, behind closed doors, lasted for more than 4 hours, which seems fairly long for people who have nothing to say to one another.

Finally, the two men requested an audience with President Putin, who received them for 2 extra hours.

After these meetings, the Ministers gave a Press conference.

They declared without irony that they had done little more than take note of their divergences.

Sergey Lavrov warned the journalists of the danger that this rupture represented for the world.

However, the next day, the same Lavrov, addressing the Russian Press, indicated that he had concluded an agreement with his guest.

Washington had agreed not to continue their attacks on the Syrian Arab Army, and the military coordination between the Pentagon and the Russian army for circulation in Syrian airspace had been re-established.

In appearance, the Trump administration is roaring its power and throwing bombs around, but in reality, it is taking great care not to cause any irreparable damage.

The worst and the best are therefore possible.