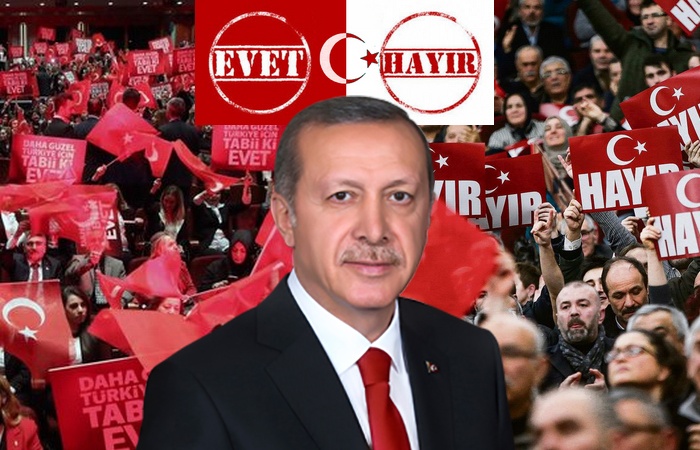 It was no surprise that Turkish President Recep Tayyip Erdoğan managed to win Sunday’ constitutional referendum.

He and his Justice and Development Party (AKP) currently have a broad base of popular support.

They are skilled at mobilizing their supporters, weaving political alliances (such as with the country’s ultra-nationalists) and picking enemies to direct Turkish public opinion against.

They also had ample state resources at their disposal to help secure the victory of the ‘yes’ campaign.

President Erdoğan has thus reaffirmed that he is the principal player on the Turkish political stage – a status achieved in part by impressive economic achievements during his first decade in power, a weak and fragmented political opposition, and turmoil in neighboring countries.

The victory was achieved through the ballot box rather than a military coup, but that does not man it gave Erdoğan a decisive or open-ended mandate enabling him to run the country single handedly for several more years without problems or impediments.

It was a narrow win, by less than couple of percentage points.

Setting aside allegations of massive electoral fraud, nearly half of Turkish voters denied him the mandate he wanted and will remain opposed to him, especially in the big cities that are Turkey’s political, economic and cultural hubs such as Istanbul, Ankara and Izmir.

The referendum revealed that sectarian, ethnic and regional polarization has reached unprecedented levels in Turkey in addition to the country’s big political split into pro- and anti- Erdoğan camps.

By winning the referendum, Erdoğan moved closer to realizing his ambition to undo the legacy of Musafa Kemal Ataturk, the founder of modern Turkey who sought to replace its Islamic identity with a Western/European one, and revive the country’s Ottoman glory-days – with himself as Sultan.

This is a reality which will have an impact not just on Turkey but the entire region, and should not be disregarded or downplayed.

Erdoğan exploited last summer’s failed military coup to advance his sultanic ambitions by getting rid of thousands of his actual or potential opponents.

Under the new presidential system, which abolishes the post of prime minister, he will be able to hand-pick ministers and a host of other officials and wield near-total control over state institutions, including the military and the courts.

In practice, Erdoğan does not really need these additional constitutional powers.

His party has controlled parliament since 2002 and can pass any legislation it wants.

Erdoğan selects the prime minister and members of government, controls military and judicial appointments, and is in charge of foreign and security policy — sending troops into Syria and Iraq and agreeing or cancelling ceasefires with the Kurdish PKK.

What further powers does he need?

Yet he has been obsessed with the need to secure a ‘yes’ vote.

When it began looking like the result would be close, Erdoğan picked fights with successive European countries in order to stoke up nationalist passions in his favour, portraying himself as the victim of a foreign conspiracy and defender of five million Turkish expatriates in Europe. His supporters were told they were choosing between patriotism and treason, or between Islam and infidels – the AKP’s top cleric even declared a ‘yes’ vote to be a binding religious obligation and a short-cut to Paradise.

But for Erdoğan opponents, the referendum outcome deals a body-blow to secularism, reinforces dictatorship, the denial of freedoms and continued imposition of emergency rule, and shatters what remains of Turkey’s liberal-democratic image.

Erdoğan is doubtless a skillful operator and tactician.

He has overcome many crises in the past and does not give up easily.

But in addition to the political rift at home, he faces crises with almost all his country’s neighbors.

He is fighting simultaneous wars against Islamic State and the PKK, embroiled militarily in the Syria crisis, and faces the increasingly realistic prospect of a quasi-independent Kurdish entity taking shape on his southern border.

But his overriding personal ambition clouds his judgement.

From long acquaintance with members of his inner circle, I can say that he really does want to become an all-powerful Ottoman-style Sultan.

He pays no attention at all to views that are opposed to his, even when voiced by his closest associates – as illustrated his ditching of former prime ministers Abdullah Gül and Ahmet Davutoğlu.

Erdoğan’s megalomania is reminiscent of the mind-sets of others who led their countries to ruin or provided pretexts for foreign powers to conspire against them.

Some of Turkey’s Western allies were alarmed by its spectacular economic and political resurgence during Erdoğan’s early years in power, and it is not out of the question that it, too could be subjected to the dismemberment schemes targeting its southern neighbors Syria and Iraq as well as nearby Yemen and Libya.

His supporters are celebrating a victory that could prove very costly if it is used to benefit the ruling party rather than Turkey as a whole and to settle scores against the losers.