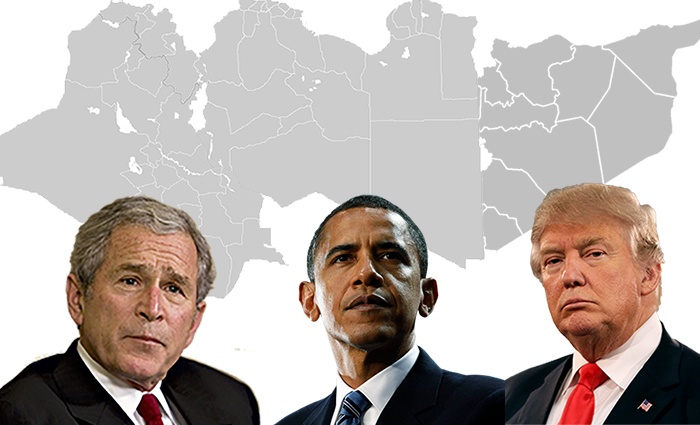 Why do we Arabs being used as targets to discipline and terrorize others?
Does the North Korean leadership benefit from these lessons?
And why Pyongyang is not like Baghdad, Damascus and Tripoli?

We felt a lot of insult and pain at the same time, as Arabs and Muslims, when we saw Israeli newspapers warning the United States, which is mobilizing its forces and fleets to attack North Korea, which North Korea is not like Syria, and it has the tools to respond, It possesses missiles and across oceans nuclear warheads.

This is because of the fact that the Arabs are becoming a «Punching Bag» and a field of experiments, and our lands are permissible, as are our blood, and the lives of our people.

With always a western well designed plan to justify any aggression against us under multiple excuses and reasons.

The smart plan begins with systematic and deliberate campaigns on weapons of mass destruction and the need to get rid of them.

Any attempt to refuse provides legal and moral ground for aggression and destruction and to change existing regimes by military force.

It was not coincidental that the common denominator among all the Arab countries that were exposed to the American aggression responded to the American dictates supported by the United Nations by disarming their «WMD’s », especially chemical ones, and abandoned their ambitions for nuclear deterrence.

But all that didn’t secure their Immunity, but it followed by the next step of aggression or occupation or both.

When the United States assures that these countries no longer have powerful weapons to defend themselves and inflict the greatest harm on the occupying invading forces, aggression and aerial bombardments begin.

Three Arab countries reflect clear examples in this regard: Iraq, Libya and Syria, which have surrendered their chemical weapons, whether voluntarily under pressure of aggression, cooperated with the international inspection teams, or as a result of destructive military strikes and an oppressive and oppressive starvation blockade.

The Bush’s administration knew very well that Saddam Hussein was honest in cooperating with the international inspection teams, revealing all of his chemical and nuclear arsenal materials, of weapons and equipment, and carrying out all the provocations by the inspectors, most of whom were spies, including their search and when they was pleased and satisfied with the fact that Iraq’s now longer have chemical and semi-nuclear fangs, the invasion began immediately.

Colonel Muammar Gaddafi was a victim of the deceitful hyena Tony Blair, the former Britain Prime Minister, who convinced him to hand over his stockpile of chemical weapons and nuclear equipment voluntarily in return for his immunity, and accepting him with his regime again in the international community.

When he handed over these weapons and equipment, they fabricated a so called revolution against him, and issued a resolution to protect the rebels from his impending massacres, and the play simply was ended with overthrow the regime and turn Libya into a failed state of bloody chaos under the control of fighting militias, and stands on the edge of the final division.

Syria faced and still facing the same scenario, but with the inconvenient installment.

The military threat, and the mobilization of aircraft carriers, was used to force it to deliver its chemical weapons stockpiles in a deal reached in 2013.

Two weeks ago, a Syrian military base of Al-Shuyrat was under American Tomahawk missiles attack, in the middle of unsure accusations of using chemical weapons in Khan Sheikhan near Idlib.

More than 100 supporters of the Syrian regime, half of whom were children, were killed in an explosion when they left the towns of Fu’aa and Kafriya in implementation of an agreement sponsored by the United Nations and within the framework of a deception, amidst Arab and international silence, especially from the Arab countries that sponsored this agreement or those who supported and still supporting those who committed this massacre.

North Korean President Kim Jong-un, who has never had any relations with Israel, has followed and absorbed these shameful Arab lessons.

He may not fall into the American trap and stop his nuclear and ballistic missile tests because he knows he needs deterrence.

Perhaps his serious threats to confront the American aggression with the same strength and how it will protect him.

Most importantly, North Korea’s allies in China and Russia are not like the Arab allies, they are more dignified and devout than the Arabs, especially in some Gulf countries, who abandoned their brothers in Iraq, Syria and Libya.

America is hitting Arabs in an attempt to discipline others, especially North Korea and Iran, and the «mother of bombs» used in Afghanistan to hit what they said to be tunnels and bases for the «Islamic state» and the «Tomahawk» missiles that hit Al-Shuyrat, all of them were in fact messages headed to North Korea and Iran.

It’s a shameful Arab situation that we reached when the resolution and the Arab leadership moved from the center countries to the sideline countries that have money and oil, those who consider America as their reliable ally, and their turn is definitely coming, because changing the regimes according to the American dictionary can be done in several ways with the newest of them all, by financial bankruptcy, which is definitely coming.