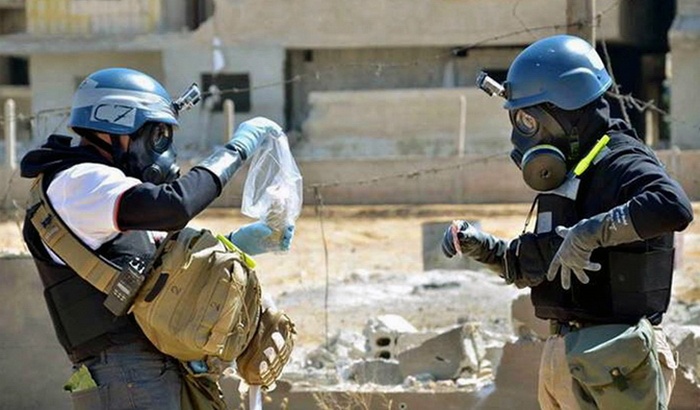 In a report published on 13 April 2016, Professor Theodore Postol, an expert at the Massachusetts Institute of Technology (MIT), observes that the Intelligence Agencies report, published by the White House, contains several gross errors.

The CIA considers that the chemical incident at Khan Shaykhun was caused by the dispersion of sarin gas.

However, photographs published by the CIA’s unique source, the White Helmets, shows people taking samples from the deposits in a crater created by a Syrian bomb.

But it is not through inhalation that contamination by sarin gas takes place.

The gas actually enters our system through the skin.

Sarin takes several weeks to degrade when it comes into contact with the air and light.

Thus if the photo were authentic, as the CIA claims it is, then sarin gas could not have been used.

For if sarin gas had been used, the people picking up the samples and the onlookers would immediately be seriously infected.

Khan Shaykhun is a locality situated in the governorate of Idlib.

It is occupied by several jihadist groups and under the de facto administration of NATO.

The only source on the Chemical Incident of 4 April 2017 is the White Helmets.

This is an organization composed of members of Al-Quaeda and led by MI6 Officers under the command of James Le Mesurier.

At the time, the Westerners pinned culpability for the attack onto the Syrian Arab Republic.

• that the gas used came from Turkey;
• that Ilhami Bali (who is currently leading Daesh in Turkey) had ordered it to be brought to Damascus;

• and that this operation was carried out with the complicity of the Turkish authorities.
Eren Erdem was accused of high treason by the Prime Minister at the time, Recep Tayyip Erdogan, for having divulged these documents (not because he had falsified the facts) and saw his parliamentary immunity being lifted.

He was arrested and sentenced to 350 days in prison.