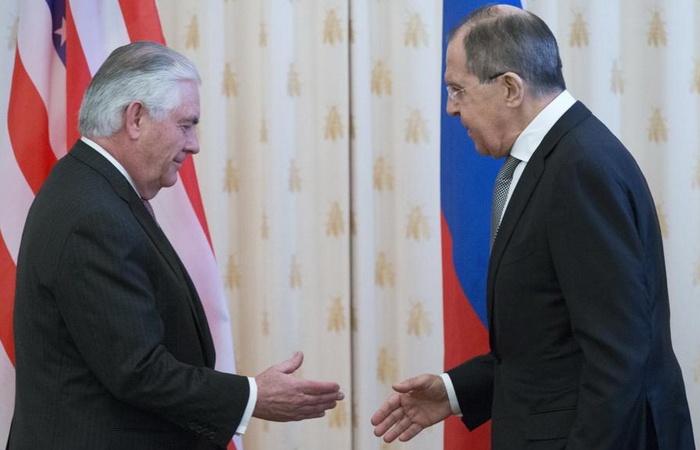 Is it true that Tillerson’s visit to Moscow failed and the relations between the Russians and the Americans are in tense?

We have another opinion.

The missile strike has benefited everyone, including President Assad, with the arrival of the foreign ministers of Syria and Iran, not the defense ministers to Moscow, is tattling something.

We give you another interpretation
One week after the US missile strike on Al-Shuyrat, the Syrian Air Force Base in Homs province, it’s possible to say that the possibility of a new strike is limited, if it’s not zero, and that the Syrian-Iranian alliance succeeded in absorbing it, whether through a diplomatic attack against the Security Council By with using Veto against a draft resolution that indirectly condemns Syria’s involvement in the chemical attack, or a media performance that is characterized by a lot of flexibility and sophistication.

There are two main issues that must be followed up, if we want to study the developments and get results that can indicate what can happen in the foreseeable future at least, not only in terms of the Syrian crisis, but in the whole region.

• The first file: the visit of the US Secretary of State Rex Tillerson to Moscow, and his meeting with President Vladimir Putin and his Russian counterpart Sergei Lavrov.

• The second file: the long and the important interview that was conducted by the French Press Agency with the Syrian President Bashar Al-Assad, that broadcasted yesterday, which it was full of responses to many current issues, and reflect a state of unprecedented self-confidence, despite the political and military pressure resulting by the American strike.

If we look at the first file, which is the first visit of Secretary Tilerson to Moscow, we find that the statements, that talk about lack of confidence and deterioration in the relations between the two superpowers has reached its minimum.

In fact, this doesn’t reflect the truth in all its aspects, because the new understandings reached in this visit, that it been told that it’s in “Tense” are very important.

The other striking point, the announcement that been made by the Foreign Minister Lavrov, that President Putin had agreed to reactivate the US-Russian air safety agreement over Syria, which he «froze» in response to and protest against the strike.

In response, US President Donald Trump responded to the Russian move by asserting that «his administration’s policy does not demand that President Bashar Al-Assad step down as part of a peaceful solution to the conflict».

He added that «the use of chemical weapons by President Assad again will cause another military response», stressing at the same time in his interview with the «Wall Street Journal» that he will not intervene intensively in the Syrian conflict.

If we get back to the second file, which is the interview of President Al-Assad with AFP, its importance lies not only in the answers, but also in its timing.

This major international agency asked about 25 questions to the Syrian president and gave him a lot of space to answer and for him to give full view, Including the statement that «the chemical attack on Khan Sheikhan is 100% fabricated» and the assertion that «Syria does not have any chemical weapons, and even if it owns it, it will not use it, otherwise it would have been used against terrorists when the Syrian army was retreating on the fronts».

The American strike could be like what they say, like the «Rooster egg» which means it’s just a onetime shot.

Because all the sides have gained from it and used it to serve their own interests, as for Trump, he used this strike to improve his image as a strong leader, and responding to the accusations of his friendship with Putin, and to divert attention from his domestic problems, and the Russians on the other hand, also showed their power as a superpower standing alongside their allies and protect them, either by using the Veto or by strengthening the Syrian air defenses.

As for President Assad, he didn’t receive the support of the Russians alone, but rather the sympathy of a broad sector in the Arab world, when he appeared to be the aggrieved by America the Superpower.

The Arrival of both foreign ministers of Syria and Iran in Moscow, heading their each delegations to meet the Russian leadership, which coincided with the end of the visit of Tillerson, confirming that the next battle is a political diplomacy and not military, and to discuss new «ideas» that may have been nominated through the recent meetings between the US secretary of State and his Russian counterparts.

Khan Shikhun came as a prelude to igniting the battle of Idlib, which is controlled by «Al Nusra Front», and stirring the «nuclear weapons» file, may have come to prepare the stage for new negotiations.

As for the Russian-American coordination, we don’t think it stopped, and we should not look at what the Russian savvy achieved after President Recep Tayyip Erdogan shoot down the the Russian Sukhoi plane near the Turkish-Syrian border, such as the restoration of Aleppo and Palmyra, neutralizing the Arab opposition allies, and the failure of Geneva and Astana negotiations, and Turkey’s ends the operation of «Shield of Euphrates».

Maters are not measured media clamor, but with facts and results on ground, the Syrian fighter planes returned to its previous course, with bombing from air, targets in Idlib from Al-Shuyrat base.

When the Syrian civilian planes return to land at Dubai airport after years of disruptions, this makes much difference.

The Syrian crisis is entering a new stage, and the pre-strike is not like after.

After all, we have to remember what John Kerry, the former secretary of state, told a Syrian activist: «Do you want us to fight the Russian for you»?

We Arabs are the victims in all cases: peace or war.