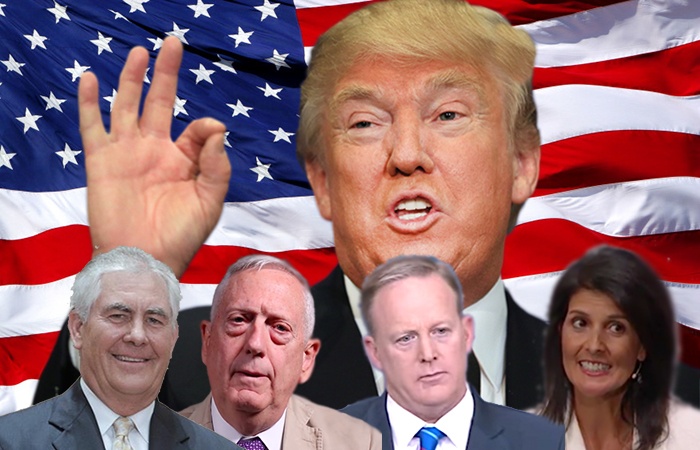 Over the course of two weeks, the Trump administration has defended 6 different positions on Syria:

Until 30 March, it took the position that the President Bashar Al-Assad had been elected by his fellow citizens and therefore was legitimately in power.

On 30 March 2017, his ambassador to the United Nations, confirmed that defeating the Syrian President was no longer a US priority.

On 5 and 6 April 2017, after the chemical attack on Khan Sheikhoun, President Trump and his Secretary of State Rex Tillerson considered that Damascus was responsible; that it had “crossed the red line” and that Bashar Al-Assad had to go.

By taking these positions, they were reinstating the Neo-Con stance and specifically, the position of Hillary Clinton.

From 6 to 10 April 2017, the National Adviser of Security, HR McMaster, and the Secretary of Defense, James Mattis, take the position that the United States has no interest in knowing if President Al-Assad must stay or go, but how to prevent the use of chemical weapons in Syria and elsewhere.

On Sunday, 9 April 2017, during several interviews, Rex Tillerson returned to his previous position.

For him, the priority was to destroy Daesh.

The fate of President Al-Assad will only be envisaged following developments with Russia.

This point of view was confirmed by HR McMaster.

Nikki Haley declared that as far as she was concerned, the United State had multiple priorities in Syria and that peace cannot be achieved while President Al-Assad was in power.

On 10 April 2017, the spokesman for the White House, Sean Spicer, indicated that the decision to bomb a Syrian airport had been taken at the same time.

This was in response to the chemical attack on Khan Sheikhoun and because Damascus uses hand crafted bombs.

In the meanwhile, James Mattis published a communiqué providing an explicit and exclusive report on the bombing of Chayrat when Khan Sheikhoun was attacked.

On 11 April 2017, following a meeting with the G7 Foreign Ministers, Rex Tillerson declares that Russia must take sides: it’s either with Washington or with Damascus.

There is no longer a question of what could be the action of the Trump administration with respect to Syria if there is a disagreement with the Putin Administration.

While the press interprets the events as a 180 u-turn of Donald Trump’s position, his assistant adviser, Sebastian Gorka, is contacting the internet sites that had campaigned for Trump and who are screaming betrayal.

He reassures them: in his opinion, despite what things seem, the President has not changed his position.