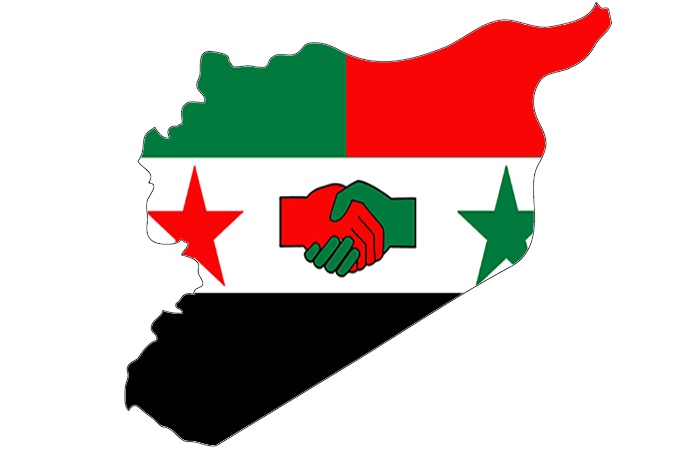 After six years of armed confrontation in Syria, a force begins to form, capable to induce order finally in that country.

For the past six years, the people of Syria, falling apart and riven by contradictions of the civil war, under a high-speed bullets of every kind of terrorists and rockets of the «allies», with them just dreaming of peace to be back once again to their land that is suffering for long.

the victims of the political armed confrontation, actively supported by West and some countries in the Middle East, and blatantly fundamentalist terrorist movements, already more than 200 thousand people, and the end of the massacre is till far away.

The negotiation process, which has been going on for several years in one form or another, has not yet yielded real results — the geopolitical interests of the participants in the negotiations for putting things in order in Syria are too contradictory to lead to any common solution.

As is often the case in this type of conflicts, although in some point the world never similar to the Syrian case, the interests of the Syrians is the last thing that every participants in these negotiations is caring about nor bother to talk about for real.

At one time the «Arab spring», that been proved that was directed by the United States, at the offices of the CIA and State Department with the support of the NATO countries and some of Arab Gulf states, has shocked the Arab world.

Anti-Government uprising began in Syria, then clashes of protesters with police and army, with quick transformation from civilian protesters to armed opposition groups.

And with this on the number of casualties has started to rise drastically.

The Syrian President Bashar Al-Assad begins to search for compromises, and overtaking Reform moves trying to for-fill what the opposition wants.

But to be honest, the damage had been already done, and the Syrian president after several bad judgment and keep depending on some ruthless security officers end the uprising, with all of his Reforms attempts, didn’t bring what the Syrian people wants, unfortunately as of response of his regime, many hold weapons and use violence, with support from many western and regional countries, in response to the actions of Assad, the western world threat and impose sanctions with calls for him to step down and stop using force against the people.

With all this support for the opposition, it was impossible for anyone to think about peace talks or any kind negotiations, with fact the Assad requested that from the beginning, with the armed confrontation spread out in the entire Syrian territory.

The situation got even worse, once the Islamist radicalizes and extremists, started to poor in literally from every crack.

And the war began with its ugliest way possible.

after more than six years of war, there are so many armed groups are on the ground, with each one have his own agenda, some fighting the regime, others fighting with, some fights each other and the list goes on and on with the fact that it;s so difficult to know who’s who and who fights who.

This confusion become more and when we see the actions of the two «Big Brothers» America and Russia who are the major strategic players at this venue.

Bashar Al-Assad, requested the help from Russia, to support his regime, with the Russian army intervened (and apparently there is a reason behind the effectiveness of this Russian intervention which is changed the situation on the ground almost completely in favor of the regime, with Russian air strikes and have bombardments that caused substantial damage to many armed forces that are fighting the regime, with many terrorist groups among them), the United States initially limited to only unofficial assistance in preparation of militants and arms of the so-called moderate opposition.

Today, when the «moderate» that the United States-controlled and support, many observers of the Syrian crisis started to doubts the fact of these factions capabilities to be able to overtake a large-scale land operation in Syria.

According to reports by American media, talking about, plans to send 150 thousand US soldier to Syria.

according to many international experts, that in case of the United States send more troops supporting Syrian opposition with the fact of the Russian supporting the Syrian Regime, chances of both sides find themselves in a very sticky situation with direct armed confrontation.

And if this happened, it’s indeed that the Syrian people or even the entire world, would imagine the outcomes of such collide, and the fact of any talk for inhabit any peace process will be hardly imaginable.

In the face of the looming global threat all healthy forces have decided to unite to put things in order, finally, on their own land.

Syria began to receive reports of the formation of a new socio-political movement under the name of the «Syrian National Front».

More importantly, the idea of creating the Association, whose objectives coincide with the main points of UN Security Council resolutions-«preserving the integrity of Syria», «taking into account the interests of all its citizens», «Elimination of terrorism», etc.-was born in the nation among ordinary Syrian citizens.

According to reports, negotiations are underway with potential members of the new movement, composed of: Members of the «Free the Syrian army, paramilitary opposition of Jaysh Al-Islam (representing part of the „free Syrian army“), local Syrian tribes led by their chiefs, various religious groups, the Social Democratic Party and the Youth Party of Syria, and with figures from the Syrian regime and its circles and their supporters, also there are various expert in the Syrian communities and the civilian opposition, Christian and Muslim communities.

If this new movement became fact on the ground, with support from Damascus, this merger will be a very real threat for terrorist groups and external forces attempting to split Syria, which is the hope that we’re looking for, to see a happy ending for this bloody conflict.