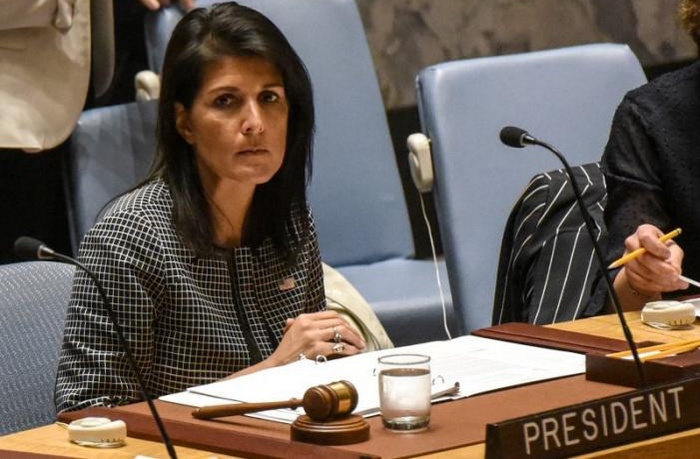 The United States told Russia at the United Nations on Wednesday that it is isolating itself by continuing to support Syrian President Bashar Al-Assad, while Britain said its scientists found sarin was used in a deadly toxic gas attack on Syrian civilians last week.

Russia is set to block a push by Western powers at the United Nations later on Wednesday to bolster support for international inquiries into the April 4 toxic gas attack in Syria.

It will be Moscow’s eighth veto in support of the Assad government since the Syrian war began six years ago.

«To my colleagues from Russia — you are isolating yourselves from the international community every time one of Assad’s planes drop another barrel bomb on civilians and every time Assad tries to starve another community to death», U.S. Ambassador to the United Nations Nikki Haley, told the U.N. Security Council.

During a heated Security Council meeting, Russia’s deputy U.N. envoy Vladimir Safronkov told the 15-member body that Western countries were wrong to blame Assad for the attack in the town of Khan Sheikhoun.

«I’m amazed that this was the conclusion. No one has yet visited the site of the crime. How do you know that»? he said.

President Vladimir Putin said on Wednesday trust had eroded between the two countries under President Donald Trump, as Moscow delivered an unusually hostile reception to Secretary of State Rex Tillerson in a face-off over Syria.

Britain’s U.N. Ambassador Matthew Rycroft told the Security Council that samples taken from the site of the gas attack, in a rebel-held area of northern Syria, have tested positive for the nerve gas sarin.

He accused Russia of siding with «a murderous, barbaric criminal, rather than with their international peers».

Safronkov, who demanded Rycroft look at him while he was speaking, responded: «I cannot accept that you insult Russia».

Haley also accused Iran of being «Assad’s chief accomplice in the regime’s horrific acts», adding: «Iran is dumping fuel on the flames of this war in Syria so it can expand its own reach».

Western powers blame the gas attack, which killed scores of civilians — many of them children — on Assad’s forces.

Syria’s government has denied responsibility for the attack, which prompted a U.S. strike on a Syrian air base.

Syrian U.N. Ambassador Bashar Ja’afari said Syria had sent dozens of letters to the Security Council, some detailing «the smuggling of sarin from Libya through Turkey on a civilian air plane by using a Syrian citizen».

«Two litres of sarin were transported from Libya through Turkey to terrorist groups in Syria», he said, adding that the government does «not have these weapons».