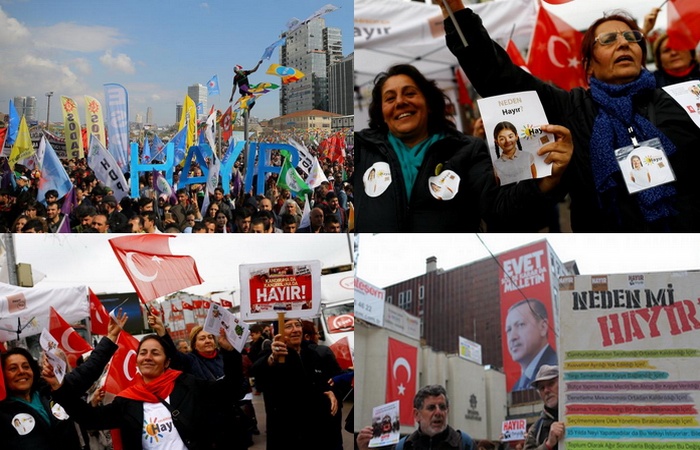 Strolling down the quayside in Izmir, a liberal bastion on Turkey’s Aegean Coast, Kubilay Mutlu and his Street Orchestra sing of «the naked emperor» and the collapse of sultanates in a bid to rally «no» voters ahead of Sunday’s historic referendum.

With mainstream media saturated by pro-government campaigning ahead of the vote on broadening President Tayyip Erdogan’s powers, those opposed to the changes are seeking alternative channels to get their message across.

«No» supporters have complained of threats and bans from the authorities, and a report by one non-governmental group said television coverage of the «yes» campaign had been ten times more extensive than that of the opposition.

«What we want to stress, despite the pessimistic picture, is that ‘no’ is a very important option. Let’s use our right to object», said Mutlu, whose band, made up of teachers and students from a local university, put their song «One ‘no’ is enough» on video-sharing site YouTube.

Sunday’s referendum will decide on the biggest change in Turkey’s system of governance since the foundation of the modern republic almost a century ago, potentially replacing its parliamentary system with an executive presidency.

Erdogan and his supporters say the change is needed to give Turkey stronger leadership at a time of turbulence. Opponents fear increasingly authoritarian rule from a president they cast as a would-be sultan who brooks little dissent.

The vote is being held under a state of emergency imposed after a failed military coup nine months ago, meaning there are «substantive» limitations on freedom of expression and assembly, according to the Venice Commission, a panel of legal experts at the Council of Europe.

Turkey has purged more than 113,000 people from the police, judiciary, military and elsewhere since the coup attempt, and has closed more than 130 media outlets, raising concerns among Western allies about deteriorating rights and freedoms.

The leaders of the pro-Kurdish opposition HDP, parliament’s third-largest party, have been jailed over alleged links to Kurdish militants along with a dozen of its MPs and thousands of its other members. The HDP opposes the constitutional changes.

«The extremely unfavorable environment for journalism and the increasingly impoverished and one-sided public debate that prevail in Turkey at this point question the very possibility of holding a meaningful, inclusive democratic referendum campaign», the Venice Commission said last month.

Turkish officials have said international observers are free to monitor all aspects of the referendum and have repeatedly rejected the notion that the media is muzzled, saying that outlets shut down in the purges were closed on terrorism-related charges, not for their journalism.

Erdogan was quoted in February as saying there was more press freedom in Turkey than in many Western countries.

A stream of music videos exhorting people to vote «no» have emerged on social media, as opposition politicians complain that the playing field ahead of the vote is far from level.

In one such video, which has had close to 400,000 views on YouTube, a women’s group appeals to listeners to use «power of laughter» in a song entitled «ha ha ha, hayir», a play on the Turkish word for ‘no’.

«They have the media, meeting halls, municipalities and resources in their hands.

But stubbornly we try to touch people on the streets, through social media», Dilara Yucetepe, who was part of the project, told Reuters.

Another ‘no’ video draws on imagery from anti-government demonstrations in 2013, when hundreds of thousands of people took to the streets in what grew from a protest against the redevelopment of an Istanbul park into a broad show of defiance.

State broadcaster TRT interviewed Kemal Kilicdaroglu, leader of the main opposition CHP, on Friday evening and was set to interview a spokesman for the HDP on Tuesday, a development the party described on its Twitter feed as «seemingly unbelievable».

Such appearances are relatively rare, all but drowned out by the multiple speeches each day by Erdogan, Prime Minister Binali Yildirim and others broadcast live on all the major networks.

According to a report by the Unity for Democracy (DIB), an opposition-affiliated organization, live television broadcasts from March 1-20 period dedicated 169 hours to Erdogan, 301.5 hours to the ruling AK Party and 15.5 hours to the nationalist MHP, which supports the «yes» campaign.

The CHP had 45.5 hours of coverage while the HDP had none, the report said.

A Turkish court last week banned the HDP’s «no» campaign song on the grounds that it contravened the constitution and fomented hatred.

In a report published on the party’s website, CHP lawmaker Necati Yilmaz said «no» campaigners had faced 143 incidents of pressure, threats and bans by the end of March.

«While the state’s resources and financial power are being used to boost the ‘yes’ vote, its legal, administrative and security forces are used to clamp down on ‘no’,» he said.