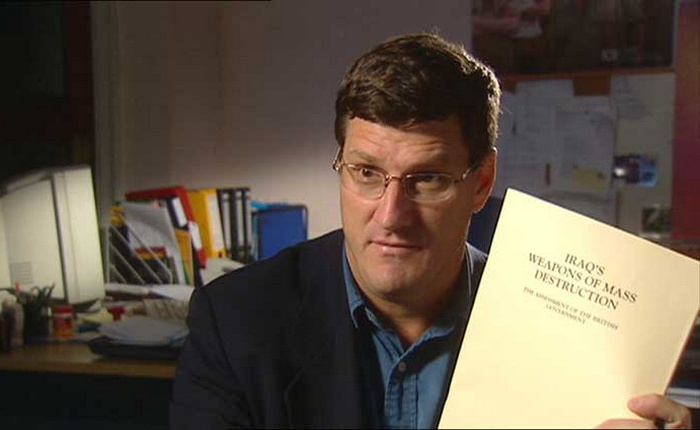 How Al-Qaeda manipulated Donald Trump and the American media?

The former UN chief inspector for weapons of mass destruction in Iraq, Scott Ritter posted an article in «Huffington post».

Scott Ritter, who was in charge of searching for weapons of mass destruction in Iraq, revealed that there was serious information that was largely absent from key media reports regarding the chemical attack in Khan Sheikhan.

Responsibility for the chemical event in Khan Sheikhoun is still very much in question.

Once upon a time, Donald J. Trump, the New York City businessman-turned-president, berated then-President Barack Obama back in September 2013 about the fallacy of an American military strike against Syria.

At that time, the United States was considering the use of force against Syria in response to allegations (since largely disproven) that the regime of President Bashar Al-Assad had used chemical weapons against civilians in the Damascus suburb of Ghouta.

Trump, via tweet, declared “to our very foolish leader, do not attack Syria – if you do many very bad things will happen & from that fight the U.S. gets nothing”!

President Obama, despite having publicly declaring the use of chemical weapons by the Syrian regime a “red line” which, if crossed, would demand American military action, ultimately declined to order an attack, largely on the basis of warnings by James Clapper, the Director of National Intelligence, that the intelligence linking the chemical attack on Ghouta was less than definitive.

President Barack Obama, in a 2016 interview with The Atlantic, observed, “there’s a playbook in Washington that presidents are supposed to follow.

It’s a playbook that comes out of the foreign-policy establishment.

And the playbook prescribes responses to different events, and these responses tend to be militarized responses”.

While the “Washington playbook”, Obama noted, could be useful during times of crisis, it could “also be a trap that can lead to bad decisions”.

His “red line” on chemical weapons usage, combined with heated rhetoric coming from his closest advisors, including Secretary of State John Kerry, hinting at a military response, was such a trap.

The media, Republicans and even members of his own party excoriated Obama for this decision.

Yet, in November 2016, as president-elect, Donald Trump doubled down on Obama’s eschewing of the “Washington playbook”.

The situation on the ground in Syria had fundamentally changed since 2013; the Islamic State in Iraq and Syria (ISIS) had taken over large swaths of territory in Iraq and Syria, establishing a “capital” in the Syrian city of Raqqa and declaring the creation of an Islamic “Caliphate”.

American efforts to remove Syrian President Assad from power had begun to bar fruit, forcing Russia to intervene in September 2015 in order to prop up the beleaguered Syrian president.

Trump, breaking from the mainstream positions held by most American policy makers, Republican and Democrat alike, declared that the United States should focus on fighting and defeating the Islamic State (ISIS) and not pursuing regime change in Syria.

“My attitude”, Trump noted, “was you’re fighting Syria, Syria is fighting ISIS, and you have to get rid of ISIS.

Now we’re backing rebels against Syria, and we have no idea who these people are”.

Moreover, Trump observed, given the robust Russian presence inside Syria, if the United States attacked Assad, “we end up fighting Russia, fighting Syria”.

For more than two months, the new Trump administration seemed to breathe life into the notion that Donald Trump had, like his predecessor before him, thrown the “Washington playbook” out the window when it came to Syrian policy.

After ordering a series of new military deployments into Syria and Iraq specifically designed to confront ISIS, the Trump administration began to give public voice to a major shift in policy vis-à-vis the Syrian President.

For the first time since President Obama, in August 2011, articulated regime change in Damascus as a precondition for the cessation of the civil conflict that had been raging since April 2011, American government officials articulated that this was no longer the case.

“You pick and choose your battles”, the American Ambassador to the United Nations, Nikki Haley, told reporters on March 30, 2017.

“And when we’re looking at this, it’s about changing up priorities and our priority is no longer to sit and focus on getting Assad out”.

Haley’s words were echoed by Secretary of State Rex Tillerson, who observed that same day, while on an official visit to Turkey, “I think the… longer-term status of President Assad will be decided by the Syrian people”.

Sometime in the early afternoon of April 4, 2017, troubling images and video clips began to be transmitted out of the Syrian province of Idlib by anti-government activists, including members of the so-called “White Helmets”, a volunteer rescue team whose work was captured in an anonymously-named Academy Award-winning documentary film.

These images showed victims in various stages of symptomatic distress, including death, from what the activists said was exposure to chemical weapons dropped by the Syrian air force on the town of Khan Sheikhoun that very morning.

Images of these tragic deaths were immediately broadcast on American media outlets, with pundits decrying the horrific and heinous nature of the chemical attack, which was nearly unanimously attributed to the Syrian government, even though the only evidence provided was the imagery and testimony of the anti-Assad activists who, just days before, were decrying the shift in American policy regarding regime change in Syria.

President Trump viewed these images, and was deeply troubled by what he saw, especially the depictions of dead and suffering children.

The images were used as exhibits in a passionate speech by Haley during a speech at the Security Council on April 5, 2017, where she confronted Russia and threatened unilateral American military action if the Council failed to respond to the alleged Syrian chemical attack.

“Yesterday morning, we awoke to pictures, to children foaming at the mouth, suffering convulsions, being carried in the arms of desperate parents”, Haley said, holding up two examples of the images provided by the anti-Assad activists.

“We saw rows of lifeless bodies, some still in diapers…we cannot close our eyes to those pictures.

We cannot close our minds of the responsibility to act”.

If the Security Council refused to take action against the Syrian government, Haley said, then “there are times in the life of states that we are compelled to take our own action”.

In 2013, President Barack Obama was confronted with images of dead and injured civilians, including numerous small children, from Syria that were every bit as heartbreaking as the ones displayed by Ambassador Haley. His Secretary of State, John Kerry, had made an impassioned speech that all but called for military force against Syria.

President Obama asked for, and received, a wide-range of military options from his national security team targeting the regime of President Assad; only the intervention of James Clapper, and the doubts that existed about the veracity of the intelligence linking the Ghouta chemical attack to the Syrian government, held Obama back from giving the green light for the bombing to begin.

Like President Obama before him, President Trump asked for his national security team to prepare options for military action.

Unlike his predecessor, Donald Trump did not seek a pause in his decision making process to let his intelligence services investigate what had actually occurred in Khan Sheikhoun.

Like Nikki Haley, Donald Trump was driven by his visceral reaction to the imagery being disseminated by anti-Assad activists.

In the afternoon of April 6, as he prepared to depart the White House for a summit meeting with a delegation led by the Chinese President Xi Jinping, Trump’s own cryptic words in response to a reporter’s question about any American response seem to hint that his mind was already made up.

“You’ll see”, he said, before walking away.

Al Shayrat was home to two squadrons of Russian-made SU-22 fighter-bombers operated by the Syrian air force, one of which was tracked by American radar as taking off from Al Sharyat on the morning of April 4, 2017, and was overhead Khan Sheikhoun around the time the alleged chemical attack occurred.
The purpose of the American strike was two-fold; first, to send a message to the Syrian government and its allies that, according to Secretary of State Tillerson, “the president is willing to take decisive action when called for”, and in particular when confronted with evidence of a chemical attack from which the United States could not “turn away, turn a blind eye”.

The other purpose, according to a U.S. military spokesperson, to “reduce the Syrian government’s ability to deliver chemical weapons”.
Moreover, the policy honeymoon the Trump administration had only recently announced about regime change in Syria was over.

“It’s very, very possible, and, I will tell you, it’s already happened, that my attitude toward Syria and Assad has changed very much, ”President Trump told reporters before the missile strikes had commenced.

Secretary Tillerson went further: “It would seem there would be no role for him [Assad] to govern the Syrian people”.

Such a reversal in policy fundamentals and direction in such a short period of time is stunning; Donald Trump didn’t simply deviate slightly off course, but rather did a complete 180-degree turn.

The previous policy of avoiding entanglement in the internal affairs of Syria in favor of defeating ISIS and improving relations with Russia had been replaced by a fervent embrace of regime change, direct military engagement with the Syrian armed forces, and a confrontational stance vis-à-vis the Russian military presence in Syria.

Normally, such major policy change could only be explained by a new reality driven by verifiable facts.

The alleged chemical weapons attack against Khan Sheikhoun was not a new reality; chemical attacks had been occurring inside Syria on a regular basis, despite the international effort to disarm Syria’s chemical weapons capability undertaken in 2013 that played a central role in forestalling American military action at that time.