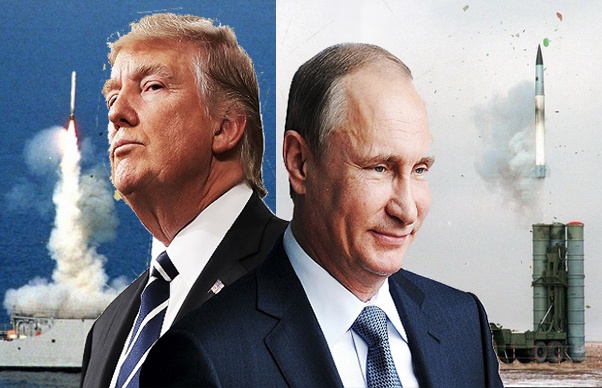 Did the Russians provided the Syrian an air defenses missiles, of S400 enabling them to respond effectively?

And have Washington absorbed the message and ready for a political deal to get down from the tree?

Russian President Vladimir Putin did not avoid the truth when he said at a press conference with his Italian counterpart Sergio Mattarella, saying that «the situation in Syria reminds us of what happened in Iraq when the United States launched its invasion of Baghdad after a speech in the UN Security Council».

The primary difference that the Russian President didn’t mentioned, is Iraq at that time was trapped and been put under starvation for more than 13 years, when it’s ally the Soviet Union was falling apart, and mostly Arabic Governments were tools in the hands of the US Bush administration, which was dominated by Israel through the neoconservative agents, mostly from Zionist Jews.

the two major developments can be monitored through the follow events in the scene, or other scenes directly or indirectly by:

First: President Putin revealed he had a confirmed information about a US military plan to hit the southern suburbs of Damascus, where there is a plan to sneak in «toxic materials» again to accuse the Syrian authorities to stand behind it, and thus strike them again.

Second: The Chairman of the Russian Duma defense affairs, Yuri Shvitkin, exclude the possibility of direct Russian respond on any possible strikes targeting Syrian air defense systems, stressing that, they Syrian have defense systems, that can alone stand against any American threat.

What can be learned by reading between the lines of these developments and statements of Russian President and speaker of the State Duma, that the U.S. missile strikes on airports and Syrian military targets still on, and that the Syrian army became able to tackle them alone without relying on it’s Russian ally, although with its coordination and blessing.

What Confirms all the above remarks attributed to a US Defense Department official at the «Pentagon», saying that «the Syrian regime has increased its air defenses in territory that under his control in the west of the country, where the number of active radars has been activated, which means empowering his army to control air moves closely».

I don’t believe that President Trump would any strikes on Syrian targets by sending warplanes after freezing the Syrian airspace aircraft protection understandings by Moscow, and therefore unlikely to be by missiles «have endeared» like what happened last Friday, but it was clear that preparations to deal with the new strike going on apace, and Duma speaker saying that the Syrian air defense is capable to respond individually to any threat, suggests that it is equipped with missiles S 300 ″ or S 400 ″ anti-Missiles/Aircraft, which considered the most advanced in this regard.

The Irony that, the Syrian air defenses fired their missiles, from Al Shuyrat military base against the Israeli warplanes, that struck, and chased it up to the deep to the Palestinian territory, and its blast roar was heard in Jordan Valley, and the occupied Jerusalem, which spread fear and panic in the minds of Israelis, soldiers or settlers, and the Syrians certainly got a Russian green light to register this event.

No doubt it’s that the remarks of the Chairman of the Russian Duma’s defense affairs Mr. Shvitkin, that the actions taken after the latest US. strike enough to enable the Syrian military response alone, a right guaranteed by international law, doesn’t rule out that this speech is a «Green light», against any new US. aggression.

Experiences and practice has taught us that political understandings peaking, reflected in the tension dissipated deals after all military escalation, as it also taught us that after each chemical crisis there is an American-Russian agreement, perhaps having the US. Secretary of State Rex Tillrson, who is currently in Moscow, and with Mr. Walid Muallem, the Syrian Foreign Minister packing his bags in preparation for departure to the Russian capital on Friday, heading a delegation comprising Faisal Mekdad and Dr. Bouthaina Shaaban, coinciding with the arrival of an Iranian delegation headed by foreign Minister Mr. Mohamed Javad Zarif, an indicator of potential Serious tripartite joint decisions, either a political deal bring calm, either military deal pay towards escalation and confrontation.

We don’t exclude any of the two deals, but we recommend using the political deal, just as happened after the crisis of Syrian chemical weapons inventory in 2013 and what drives us to this that the Syrian delegation in the same composition, which is negotiating a political deal defused the first Russian-American military confrontation, carriers and Super vessels to its pens that came to the Syrian coast.