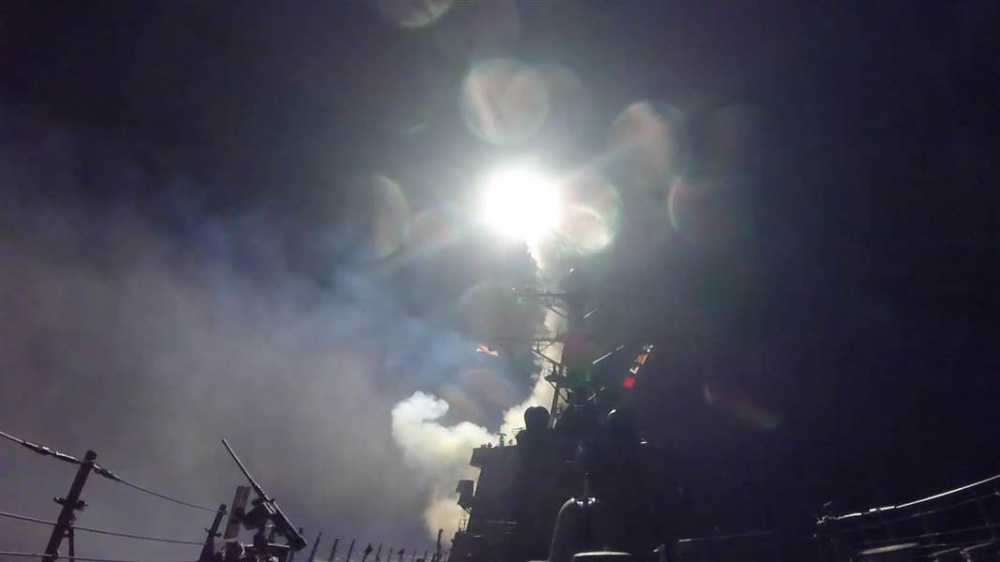 Trump’s missile strike on Syria was aimed at improving his domestic image, but the consequences for the region could be calamitous

Friday’s American cruise missile strike on Syria’s Shueirat airbase – which destroyed its main runway, six aircraft and a fuel depot and killed twelve soldiers and civilians (including five children) — did not come as a surprise.

It was preceded by two days of hyperbole, demonization and incitement focused on the horrific chemical massacre at Khan Sheikoun which made plain that an attack was on its way.
The new US president, Donald Trump, had given notice that he was considering his retaliatory options, including military action, while his UN ambassador Nikki Hailey declared that when the Security Council was incapable of taking a decision her country would act unilaterally.

The US administration issued its verdict and accused the Syrian government of committing the chemical massacre from the moment it was reported, without waiting for a credible, impartial and transparent international investigation.

This affirms that plans for the aggression were in place before the massacre took place, and it was merely used as cover.
And, yes, it can only be described as aggression.

It is reminiscent of past acts of US aggression against Iraq, Libya and Sudan, launched without UN authorization on pretexts that later proved to be fabricated and false.

Like them, its aim was to flaunt America’s greatness and depict its president as a tough-guy by attacking a weak and war-torn country which cannot defend itself or retaliate.
We will not take lectures about protecting civilians and upholding human rights from a county like the United States which has attacked against at least four Arab countries in recent years and turned them into failed and dismembered states and arenas for bloodshed and terrorism.

This is a country that caused the deaths of more than one million Iraqis and tens of thousands of Libyans, and contributed to the killing of 300,000 Syrians through its arming, funding and training of allies, clients and proxies.

It is less qualified than anyone to talk about humanitarianism.
The chemical massacre in Khan Sheykhoun was an atrocity and its perpetrators are war criminals, whoever they are. But we need some solid facts about it.

The Syrian government denies culpability, and many observers have pointed out that it would have been irrational for it to launch such an attack.

Attempts have been made in the past to implicate it in chemical attacks in order to justify Western military intervention.

A whole host of armed groups and their foreign backers have an interest in provoking such intervention, and in wrecking cease-fire arrangements and prospects of a political solution and perpetuating bloody anarchy.

The US has a long record of fabricating charges as a pretext for military action such as in Iraq and Libya.

In light of all this, we are entitled to demand firm evidence obtained by an impartial international investigation into the incident.
This missile strike could snowball into a regional or even global war that deluges the Arab world. Russia has denounced it in the strongest terms and at the highest level.

Foreign Minister Sergei Lavrov described it as a pre-meditated act of aggression that serves to strengthen the armed terrorist groups in Syria and likened it to the 2003 invasion of Iraq.

It is liable to reshuffle all the cards in Syria and take the crisis back to square one, scuppering all peace efforts and initiatives and make an escalation of warfare, bloodshed and violence more likely.
Moscow has also suspended its understanding with the US on ensuring the safety of each other’s air-force operations over Syria.

This may mean it plans to supply Damascus with advanced air defense missiles capable of shooting down intruding US or Israeli aircraft.
This American act of aggression will not bring down or seriously weaken the Syrian regime.

But it could well prove to be the harbinger of more wars in the region.

It is no coincidence that the regional countries that were the first to applaud it – Saudi Arabia, Turkey and Israel – are themselves engaged in wars of aggression against neighbors.
The Arab world now stands on the edge of a volcano, awaiting any tremor to trigger an eruption that could inundate the region’s inhabitants and render it a wasteland for generations.
Now is not the moment to elaborate on the domestic considerations behind Trump’s decision or the calculations of his regional allies.

The urgent priority is to take a stand against this aggression.