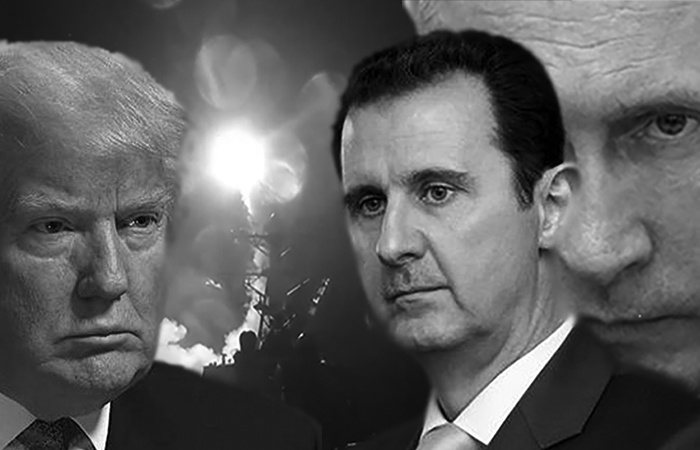 Don’t be confused by the diplomatic games and the Pied Piperism of the major medias.

What happened in Syria has no connection with the story you are being told about it, nor the conclusions which are being drawn for you.

This morning, the United States are said to have fired 59 cruise missiles from the Mediterranean in order to destroy the Syrian military air base at Sha’irat.

The attack was intended as a unilateral action aimed at punishing the chemical weapons attack which the US attributes to the Syrian Arab Army.

Stunned by the amplitude of the reaction by the US, all commentators concluded that the Trump administration had made a 180° turn concerning the Syrian question.

The White House was claimed to have finally adopted the position of its US opposition and its British, French and German allies.

The reality does not correspond to the story

Without hindrance, the US cruise missiles crossed the zone controlled by the new Russian weapon which inhibits NATO communications and commands.

According to General Philip Breedlove, ex-Supreme Commander of NATO, this weapon enabled Russia to gain the advantage over the United States in terms of conventional warfare.

It should normally have upset the guidance systems of these missiles, but apparently did not function.

This indicates either that the Pentagon has finally found a technical riposte, or that the weapon had been De-activated by the Russians.

The Syrian anti-air defense system includes S-300’s controlled by the Syrian Arab Army and S-400’s served by the Russian army.

These weapons are supposed to be capable of intercepting cruise missiles, although the situation has never yet presented itself in combat conditions. They are, of course, triggered automatically, but they did not function either.

Therefore no anti-missile missiles were fired, neither by the Russian army, nor by the Syrian army.

When the US cruise missiles hit their targets, they landed on a military base which was almost deserted, having been evacuated only a short time before.

Therefore, the missiles destroyed the tarmac, the radar equipment and a number of aircraft which had long been out of service, some hangars and living quarters.

They nonetheless caused a dozen victims, six of whom died.

Although no cruise missile was officially tracked as off-course or destroyed, only 23 and not 59 hit the base at Sha’irat.

What does this masquerade mean?

Since he acceded to the White House, President Trump has been trying to change his country’s policies, to substitute cooperation for the current confrontational system.

On the question of the «Greater Middle East», he took position for the «destruction» of jihadist organizations (and not for their «reduction», as his predecessor claimed).

Over the last few days, Trump has recognized the legitimacy of the Syrian Arab Republic, and thus the maintenance in power of the democratically-elected President, Bashar Al-Assad. He received the Egyptian President, Marshall Abdel Fattah Al-Sissi, an ally of Syria, and congratulated him for his fight against the jihadists.

He has re-established a direct communications channels between Washington and Damascus.

In any case, President Trump’s problem was to convince his allies to apply his policies whatever the investment they had made to overthrow the Syrian Arab Republic.

It is of course possible that President Trump made his about-face in three days simply because he saw a video broadcast on YouTube, but it is more probable that this morning’s military action is the continuation of his previous diplomatic actions.

By attacking,President Trump satisfied his opposition, so they will be unable to oppose the next phase of operations.

Yesterday, Hillary Clinton called for the bombing of Syria in a riposte to the alleged use of chemical weapons.

Donald Trump ordered his troops to fire cruise missiles on an almost empty base, after having given advance notice to the whole world, including Russia and Syria.

Damascus, by sacrificing this base and the lives of a few men, gave him the authority to carry out a vast action against anyone who uses chemical weapons.

But so far, the only people who actually use these weapons, and have been identified by the United Nations for doing so, are – the jihadists.

Daesh, which had also been warned of the US attack (but by its British, French and German commanders), immediately launched an attack on Homs, which is now deprived of an air base.

We shall see in the next few days how Washington and its allies will react to the jihadist advance.

It will only be at that moment that we shall know if Donald Trump’s maneuver and the gamble by Vladimir Putin and Bashar Al-Assad has worked.