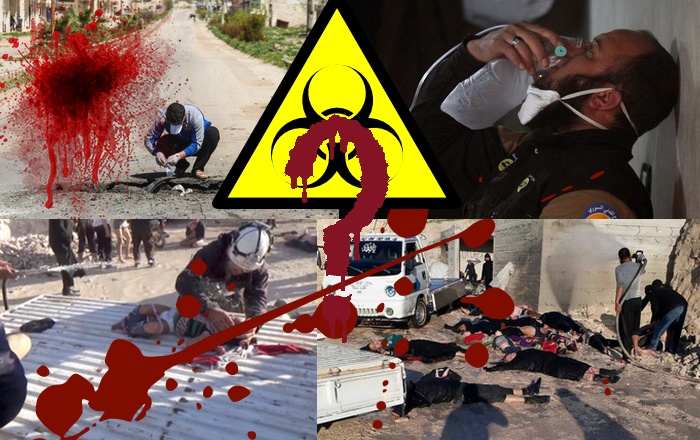 What I’m about to say in this article today won’t be likable by many, even I might receive attacks and overturns from those whom are for long time, want to believe everything they hear or everything they see in the media without a logical, rational and factual evidence to prove its authenticity, the least that people use their minds and think about it a bit.

The world is living for long, in a big lie practiced by its authors and fabricates, spread lies and false stories and planned events, by exploiting the emotions of the people and deceives them without leaving them a room to use their mind and think about what they see or hear and logically verify its authenticity.

The chemical attack that is being talked about, which was two days ago, in the city of Khan Sheykhoun, to the South of Idlib, which all the Western world led by the United States, accused the Syrian regime as usual, to be behind it, knowing that this city is under full control of Al Qaida’s wing in Syria, currently known as the «Al-Sham liberation body» formerly known as «Al Nusra front» which is as it known also, is classified as a terrorist organization, with marking under the word of terrorist.

It been said always that, there is no perfect crime; there is also no complete perfect lie, without have some gaps can be detected at some point.

My words, doesn’t means that I completely clear the Syrian regime of anything, not for his actions in the present or past, but logic and reason are drawn from all of us, to think a little bit about what’s going on.

It is reasonable or logical to the Syrian regime, which is really under threat, and vulnerable to attacks and indict him on anything he gets from all the world, to initiate a job like this, which would be the first defendant, and the side that all fingers will be pointed at him.

Unless this regime is stupid or ignorant, knows absolutely nothing and has no knowledge even what so ever of what was going on around him, with simply go ahead and done such an act like that, in this point of time, to be specific.

If we assume that the Syrian regime is stupid and cannot make a decision by his own and doesn’t have the expertise nor the ability to think of such acts and their consequences that he made, whether Russia or Iran, his allies, they are not stupid, so they will allow him and let him do something stupid like that, at this particular time, when only him who would suspect of it?

And if this Regime is stupid, how he managed to survive for so long and nobody could take him down, despite the billions of dollars, weapons and equipment and armed groups of every kind and nationalities, fighting his forces and his allies on the ground for six years now, and all of them failed so miserably to get the job done.

Surely that these accusations are irrational.

Everyone knows that during the past weeks, the voices and statements from the administration of the US President Donald Trump and his Secretary of State Rex Tillrson, and the delegate of the United States in the Security Council, Nikki Haley, and as the remarks, that we’ve heard by the White House spokesman Sean Spicer about a change in the US Administration’s position toward the Syrian regime and its President Bashar Al-Assad, with the exchanged letters since the visit of the US Congress member Tulsi Gabbard to Syria a few months ago and she brought a message from the US President Donald Trump to Assad, which It became clearly indicates that things have started running towards the Alliance, that we are today seeing and witnessing the underway activates to liberate the city Raqqa from the Islamic State, which we are seeing in this period many apprehensions concerning the way of how and who will do this operation and the conflict between the United States and the forces that support on the ground in addition to Russian and Turkish stance.

In addition to the United States to assemble what they love to call a «moderate groups» that been formed and funded by the United States, and imposing on them to unite in one formation to fight terrorist organizations with the talking here about «Al-Sham liberation body» formerly known as «Al Nusra front» which as mentioned is the controller of the city of Khan Sheykhoun, where the alleged chemical attack has took place, and which been accused the Syrian regime of being behind it.

Logic and reason here must realize that there are players in the shadows, that don’t want any kind of solution.

If we think of reason about what happened to start looking a little bit.

It been known from some time now, that there is a struggle going on in the United States between different poles as a conflict between the CIA and the administration of President Trump, which been for long ago.

Any such action would turn the tables as we see now.

Today, after news that the alleged attack, we saw the same people who came out for days talking about the American attitude change, we see them they themselves as President Trump and Rex Tillrson and Nikki Haley, they speak differently altogether with the return of bluster tone similar to those which were issued by the administration of President Barak Obama.

This is so stupid and can’t happen, and that entire mind thinks a bit and looking for who has the interest in such an action.

It’s very natural to see all the Syrian opposition come out all and accuse him of doing this attack, it’s not new.

The Syrian regime has committed a lot of mistakes up to crimes, and not just in six years but for decades, but on the other side, who is accusing him of these crimes, they themselves are criminals who killed and torture people, and photographed them in prisons.

So despite all that, there are forces in the world still has the mind and the will, with much wisdom and ability of thinking and offer some logical analysis.

Taking Russia’s point of view, Russia is also is not logical to send such an open message to the US administration and tell them what I’m saying now, so come out and say that because there are indications of improvement in US-Syrian relations, something has happened to sabotage this path.

This doesn’t make sense to being said by the Russians publicly to the US administration, maybe Russia could send a message through diplomatic channels or methods out of the spotlight.

So the question of chemical attack was much ADO and mystery, I doubt that the Syrian regime is the one did this work, it is illogical to go and kill someone everybody knows, that if he got killed, you shall be the beneficiary and therefore the first suspect of the crime.

This is illogical and timing do also raises suspicion, with regret, that people often overlook the issue of timing of accident and backgrounds; the timing of a command is the primary factor in everything.

The new orientation of the recent US administration remarks about administration officials the issue of convergence and cooperation with the Syrian regime and activate the Alliance and strengthen cooperation with Russia in order to fight and eliminate terrorism cannot take place without something happening to stop these initiatives and simply turn the table upside down and restores shuffle again and restores the path of the procedure to get back escalate tension, with getting back to scratch.
Because there are people in the world and even within the United States, was unhappy about hearing what we’ve heard from the tone of the US administration affinity with both Russia and the Syrian regime in the past period, with media has the powers to do its part in fueling ADO in the subject in different ways.

So they had to plan to do this fails and puts the Administration in an awkward position and offensive, force to change its attitude.

I honestly and without bias, for example, I didn’t see any that kind of big sympathy from the media regarding the terrorist bombing which took place in Russia a couple of days ago and killed humans.

If that happens in any European country or the United States of we’ll see the entire world and all media yang goes berserk and speaking of ripple and condemned all violence and force.

To all of the above aims only to possess a mind and can think objectively without being dragged behind emotions, lead to possess something of logic in a world where animal instinct prevails and illogical.

Because all the tragedies suffered by mankind for centuries was caused by not using reason and logic and involves people with their emotions and instincts which pay about blood and disasters.

Come a little before making accusations and frankly do not rule out that I’m personally assuming for fact, that «Al-Sham liberation body» formerly known as «Al Nusra front» are themselves they did this work, it is not surprising or new to terrorists for doing terrorist acts like this, with information about their possession of chemical weapons, which they will not find what prevents them from using them when its necessary with right timing.