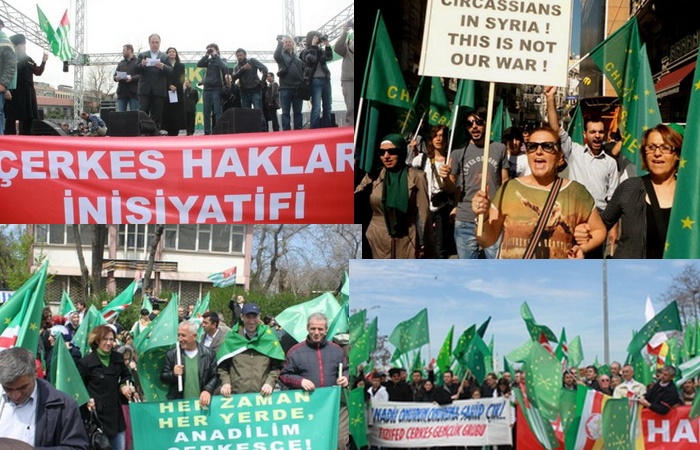 Several years ago & the Circassians in Turkey are coming out in rallies to demand justice to give them full rights to speak freely about their origins & their roots within the Turkish society that does not recognize any other roots & origins & their right to teach their own language without pressure or influence, and without the usual use of them as tools in others wars, that always kept them at the end of them alone pay the ultimate price.

I don’t find myself embarrassed when I describe my people with good heart & emotional that is so naive, so our people has been forever suffering the consequences of their acts that been done as of passion and spontaneous stand points without prior planning or thinking of the consequences.

the Circassian people who left their homeland in the North Caucasus after a long war with the Russian Tsars & their army that was mixed with German & Austrian officers since the Empress Catherine II of German origin.

After the eviction, the majority of their people went towards Turkey in particular which is our subject.

It been Known, that the Circassian had an old presence in the Middle East that returns to hundreds or thousands of years to be objective, they return to their ancestors the Hittites, who ruled over a vast area of Turkey today to the Levant area until their State borders with the Pharaohs of ancient Egypt.

Also there are the Mamluks period which lasted for more than three centuries, then the Ottomans entered to the Levant and Egypt and Circassian Mamluki rule ends and with many of them after that joined & put themselves at the service of the Ottoman Empire since that time.

The number of Circassians in Turkey, which they are one of the largest ethnic minorities in Turkey & according to available statistics, they are over two million, spread throughout Turkey with some population in different regions, such as Kayseri, Tokat & Kahramanmaraş.

Circassians are a Caucasian immigrant people, but the vast majority of them have assimilated to the Turkish language, and only a small minority still speaks their native Circassian language, with that being said its worthy to say that, the majority of the Circassians in Turkey are still hold their roots & origins & their customs & traditions, but the problem with in the Turkish surrounding boils down to four basic elements.

1.the dilemma of the Caucassian origin inside a Turanic State, that does not recognize or allow to speak up about other origins, which is the case for many groups such as Arabs, Armenians & Kurds in Turkey since the Ottoman Empire and still they are suffering somehow to this day.

2.The crisis of the overlap between nationalism and Islam in particular at the stage of the secular Turkish Republic founded by Mustafa Kemal which has nothing to do with religion & Islamic law of Sharia, which is the situation that is continuing to this day.

3.The reality of loss of the majority of the Circassian people in Turkey and their meltdown in the nature & the requirements of life which greatly hinders the issue of preserving traditions and customs and language in society that is big in a country like Turkey, that is full of problems and pressures.

4.The nature of the Circassian people, that has reckless courage, which made them strong, brave & faithful soldier, that you can really count & rely on him, which is the thing that turned this people into a weapons against the enemies of the State or the regime opponents, Circassians as they were known as a minority in their countries of residence, they became loyal to the ruling government in that country in which they live & which cause them many disasters in the countries that they are living in, as they look in Syria & Jordan.

Today in Turkey since the justice and development party arrived to rule, voices resound among minorities within Turkey to claim their rights and specifically as is the case with the Kurds, and for sure the Circassian in Turkey, have all the rights to speak their mother tongue freely & declare their roots & origins without fear & adhere to their customs & traditions with their right to educate their own language as it should be.

This issue has contributed significantly for several years now for the Circassians in Turkey to promote links to their motherland in the Caucasus, since many families of Turkey send their youth to universities in North Caucasus republics within Russia, to learn and socialize with their communities of origin and get what it takes to strengthen the link with home.

Additionally many Turkish Circassians had came to Caucasus & established multiple types of businesses & commercial projects that have a significant role in strengthening this link.

In light of the situation in the region, specifically the war in Syria, the war that distracted the Circassians in Syria in a big & pity ways, with a split between pro-Syrian regime and opposed-Syrian regime.

Also in Turkey, the situation in some point is no different than Syria, where we can notice the Circassians in Turkey are divided between supporting the regime of Recep Tayyip Erdogan, or opposing his regime.

What I want to get to is wishing of all my Circassian brothers & sisters, to be extremely cautious & be very careful about getting involved in crises & wars because we will simply pay the price alone as it happened previously in many occasions.

The result will always be in reverse for the people and will contribute to the strengthening of its problems & with keeping listening to some extreme voices no mater if it was nationalist or religious, the catastrophic result will be the same.

Finally, I’m joining my voice with other voices that are claiming the rights of the Ciracssian rights in Turkey & their continuing work until they get all their demands which will enhance effective & positive role in the region, not only within Turkey.

The Circassians in Turkey provided substantial assistance to their Circassians of Syria, who came out of the war, which I hope is only as a duty of fraternity and blood connection & doesn’t related or support position side against other.

Also the Circassians in Turkey played an important role in strengthening the coherence with the motherland and thus promoting convergence in the region who wish to enjoy the Turkish President to be wise to not exploiting the Circassians & converts them into weapons to face Russia or to use them as bargain card.

With the new generation that became more mature & aware, & no longer whittling into politics & its games to be put on the line as it was with his grandparents when they put between stony millstone.

Circassian, should not forget, that even Turkey during the Ottoman era, used them & manipulated them to serve personal interests & played on religious chord which cost the Circassian dearly.