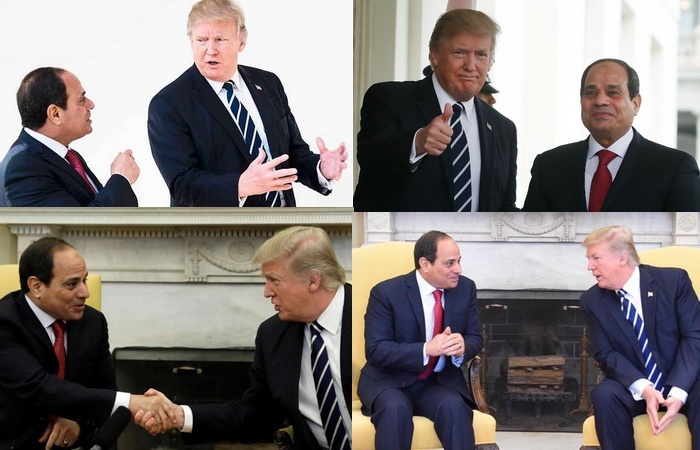 Al-Sisi will lead a Sunni Alliance against Iran.

And Saudi Arabia getting back to back seats.

And an Egyptian role «leader» in Yemen, Libya and Syria.

And «Muslim Brotherhood» are the victims.

No Arab leader had received flattered and praise from the White House inhabitant like the Egyptian President Abdel Fattah Al-Sisi, since his counterpart Mohamed Anwar Sadat signed the Camp David agreements in 1978, the US president Donald Trump said clearly and deliberately that «We stand solidly behind President „Sisi“.

He has done a wonderful job in a very difficult position».
«We stand behind Egypt and the people of Egypt»,«I say to the President that you have a friend and ally in the United States». «Me too».

This praise and flattery means several things, most notably the new US President wants to crown his Egyptian guest as a key ally in the Middle East, with him and his country becoming, the new US foreign policy lever in the region in parallel with the Russian attempts to draw a new map for the region which Iran is in the center.

President Trump confirmed to activate the strategic partnership between Egypt and the United States, particularly in fighting terrorism and military cooperation, and this is to be expected from a President that gave priority to root out terrorism even if it came at the expense of human rights.

President Sisi will return to Cairo and had become a delegate as the United States in the region, and the winner of its support and trust, which means he will be spearheading all future political or military wars, and a crowned leader of the Sunni Alliance trying to configure it in the face of Iran.

It is the beginning of an era and an end of an era, with the upcoming days will shows an Arab coalition against political Islam, both «moderate» or «extremist» Shiite or Sunni, bypassing Arabs basic principles of Palestine, and reviving the fictitious rotten peace process, and returning to the fruitless negotiations to between the Palestinian Authority and its leader in one hand, and the State of the Israeli occupation on the other.

Saudi Arabia which was dreaming of sitting in front of the driver’s seat in the region with the blessing of the new US President, retreated to the back seats, and are obliged to accept the new Egyptian leadership, reconciliation and coexistence with rapid ascent, therefore when the President Sisi visit Riyadh responding to the Saudi invitation that came as culmination of reconciliation «planned» between the two men on the sidelines of the Arabic summit in Amman, He’ll visit Saudi Arabia, as in strong position and not of weak position of who is looking for financial aid, Saudi Arabia no longer has billions in surplus, that even if they owned, it’ll go to Trump in trying to please him and absorb his anger and respond to his extortionate style, for them to be and stay safe.

Trump agreement with Sisi on activation the strategic partnership between the two countries, will be reflected in the form of an Egyptian role in confronting the Muslim Brotherhood movement, and its branches in Libya and Yemen, and real engagement in a bad war against Al-Qaeda and the «Islamic State», and fight the Iranian expansion in Syria and Yemen.

President Sisi bet on Trump before even he won the presidential elections when they met in September last year on the sidelines of the General Assembly, not as of love, but as an hatred of Barack Obama, who rejected his invitation, and froze the American financial assistance to Egypt for more than two years because of his opposition to the overthrow of an elected president in a military coup, and fortunately President Sisi won the bet, and became a faithful friend to the new US President, strengthened this friendship when he didn’t hesitate a moment, any President Sisi, withdrawing draft resolution that was presented by Egypt to the UN Security Council to condemn the Israeli settlement and cease immediately, once he received a call from president trump even before Trump takes his duties as president, and with that move president Sisi got two «consents», with one stone, an American and Israeli consent.

The next stage will be communal and regional polarization stage, interracial, maybe develop into devastating wars and the emergence of new States, redrawing the map of the region, with Egypt Sisi get a role that will be central, confronting Iran, in coordination with the «Allied» Israel.

How the results will be? And who is the winner and the loser? This needs a lot of waiting.

And the day are between us.