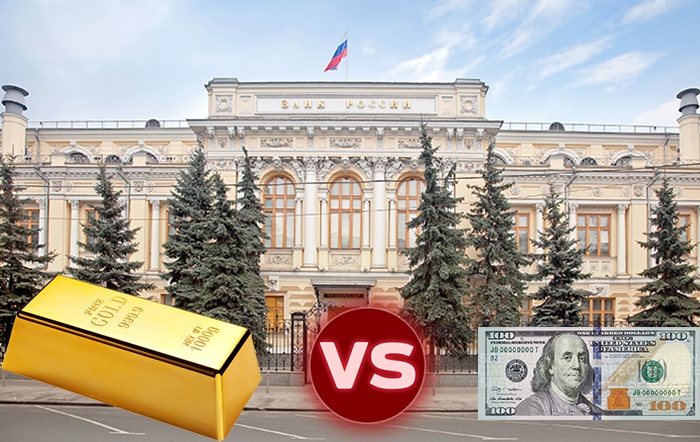 The Central Bank of Russia has announced his topping world’s central banks for the fifth consecutive year in terms of the amount of gold that buys to boost the Russian reserves.

The bank said, it had bought two hundred tons of gold in the past year and plans to buy 250 tons this year, a 49-ton increase from last year, for the first time since 1998.

Observers say that the world’s central banks are buying gold, drawing a new trend to re-establish a unified reserve in the world.

Yaroslav Lesovolik, the head of the Eurasian Development Bank, explained that gold has shown a strong ability to withstand the chronic turmoil of the global financial market.

He added that gold is an encouraging tool in the protection of reserves of central banks, pointing to the continuation of the Central Bank of Russia to diversify its reserves and reduce its reserves in US securities after he was employed in the dollar 15 years ago.

He concluded by saying: Russia’s purchase of these quantities of gold is among the actions taken by the Central Bank of Russia to replace their reserve from US dollar to gold.

Thomson Reuters had forecast in its March 31 publication that the value of the ounce would not be less than $ 1,259 in 2107, confirming that gold would remain stable for the foreseeable future.

Thomson Reuters also notes that if the US reduces the corporate tax from 35 to 25 percent, it will stimulate employment in gold, not in the dollar.

It worth to mention that, Russia ranks fourth in terms of gold production after China, Australia and the United States.