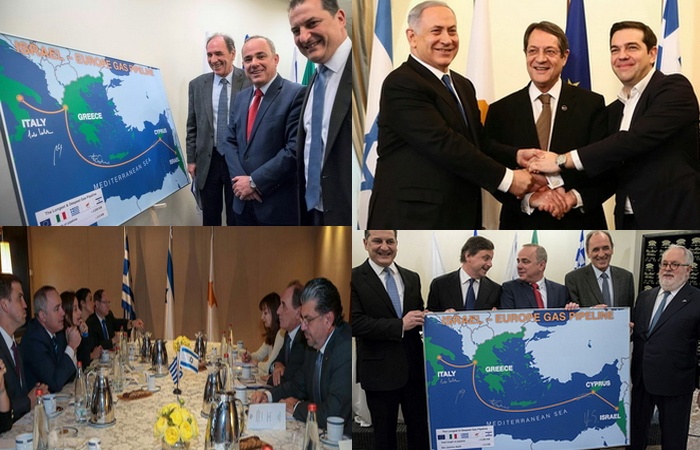 High political sources in Israel confirmed the information regarding Israel signed a joint declaration with European countries to build a sea natural gas pipeline connecting the Israeli coasts to Europe, with this move that is expected to give Tel Aviv a strong access to the global energy market.

A multiple Israeli media reports, that, Energy ministers in Israel, Cyprus, Greece, Italy and the European Union signed a joint declaration in Tel Aviv on a joint declaration to push for a project to build a sea pipeline to supply natural gas from Israel to Europe.

According to the same sources, this pipeline is the longest-built in the world, with a length of about 2000 km, and cost up to 4.5 billion dollars.

The construction of the pipeline is scheduled to take eight years to end in 2025.

The signatories announced their commitment to the development of the project.

They also agreed to form a working group to strengthen and develop it and reach a common international labor agreement.

The ministers announced the adoption of the joint professional document prepared by their ministries, which recognized that the project is characterized by geometrical, economic and strategic values, while the Israeli Energy Minister, Yuval Steinitz, according to the Israeli Hebrew newspaper (Israel Hayom), that Israel, from now on started to play an important role at the Global energy areas, pointing out that it will have economic effects, and of course a political too, according to his statement.