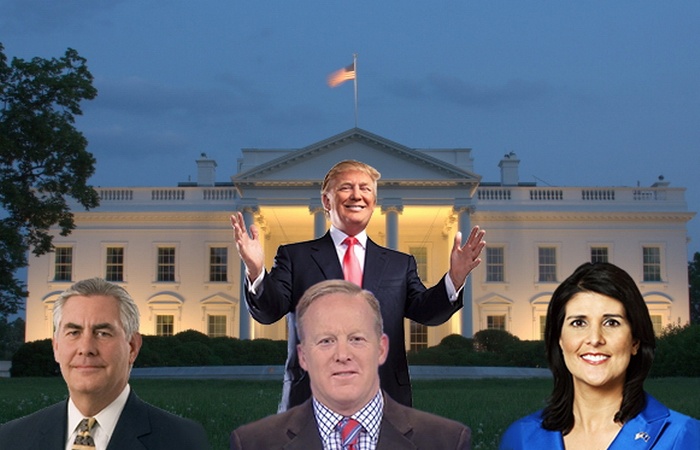 A considerable step has just been taken by the Trump administration – his principal diplomats have announced that they recognize the right of the Syrian people to democracy.

They admit that as a nation, the Syrian people made the sovereign choice of Bashar Al-Assad as their President.

That is the end of all the rhetoric about forced «democratization» which accompanied the military adventures of the previous administrations.

After having reformed the National Security Council, after having exchanged intelligence with the Russian army, after having forbidden his men to continue to support the jihadists wherever they may be, and after having launched genuine attacks on them in Yemen, Iraq, Libya and Somalia, the new President of the United States has announced that he is putting an end to his country’s interference in Syrian politics.

The US ambassador to the Security Council, Nikki Haley, did not stop at announcing that overthrowing President Assad was no longer Washington’s «priority» — she clearly declared that only the Syrian people had the right to chose its own President.

Her declaration was immediately confirmed by the Secretary of State, Rex Tillerson.

In order to understand the progress this indicates, let’s remember that since 2012, the Feltman plan has been working for the abrogation of the sovereignty of the Syrian People.

Let it be known – with Donald Trump, the White House has finally converted to democracy, in other words — « Government of the People by the People, for the People », according to the famous phrase of Abraham Lincoln.

The United States are in the process of becoming a normal power.

They are abandoning their imperialist ambition. They have renounced the Wolfowitz doctrine of global domination.

They once again recognize that all Humans are born equal, whether they are Westerners or not.

The astonishment of the member states of NATO was as great as the measure of the event – and because since 9/11 they have been using the concept of democracy completely back to front, they said nothing.

«The question is not to inquire whether or not we must throw Assad out», he declared.

«The question is to know whether the international community will respect its own engagements».

Translation — «The question is not to inquire what the Syrians want, but whether or not the United States and its allies (the «Friends of Syria») will respect the promise of the Obama administration to re-establish a French mandate for Syria».

For François Hollande’s team, and since bad news never arrives alone, Ankara was the first to drop Paris.

After a visit with Rex Tillerson, Erdogan announced that he was giving up the idea of creating a «safe zone» in Manbij and Raqqa — an elegant way of admitting that he was unable to extend to Syria the illegal occupation that Turkey has maintained in Cyprus since 1974.

So that’s the end of the Franco-Turkish alliance.

In any case, the return of NATO to international law has begun.

It joins the position of Syria, which has defended it with its own blood, and that of Russia and China, which protected them by seven successive Vetos at the Security Council.

The next step is the one already taken by Syria in July 2012 – that is, to convince the whole of the North Atlantic Treaty Organization to stop manipulating international terrorism.

That is to admit that the current version of the Muslim Brotherhood is not an Arab brotherhood at all, but a branch of the British Secret Services – and to recognize the fact that they are not Muslims, but hide behind the Qr’an in order to push forward the cause of Anglo-Israeli imperialism.