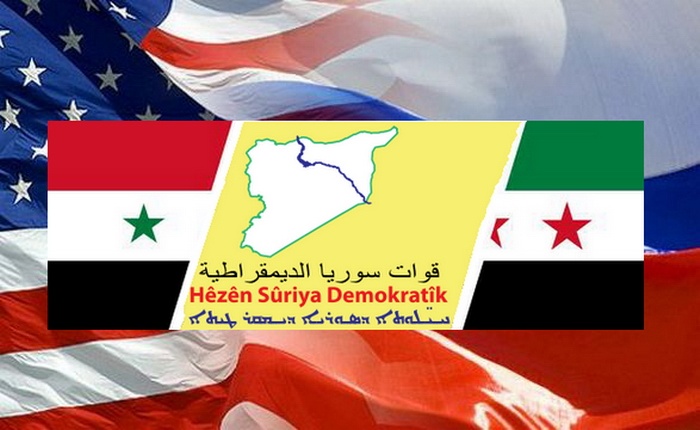 A disturbing mantra is increasingly being heard in Washington and some European capitals these days, and strongly echoed in the Western media.

It calls for the partition of Syria via the establishment of interim autonomous areas for the various ethnic and religious groups as a preliminary solution to the Syrian crisis.

I have personally taken part in a number of discussion programmes at which I was surprised to hear this proposal repeated in various forms, notably by American experts involved in the international conference on the war on terrorism held earlier this month in Washington.
The new US secretary of state, James Tillerson, a newcomer to politics, articulated in moderate-sounding terms the plan that is currently and rapidly being implemented on the ground by the US military.

He said the US would establish ‘interim zones of stability’ in Syria, while adding that these would be different to the ‘safe zones’ that the Syrian opposition wants, and that ‘their aim is to allow the Syrian refugees to return to them.’
To put it more bluntly and briefly: the partitioning of Syria could begin with the city of al-Raqqa and its environs – and this could serve as a first step, by the backdoor route of protecting refugees, towards achieving regime-change.

That is precisely what was done in Libya, when the UN Security Council resolution calling for the protection of civilians was used as cover for bombing the country and toppling its regime.
The capture of the Tabaqa dam and airbase by US forces (300 ground troops) backed by the Kurdish SDF (Syrian Democratic Forces) on the pretext of preventing the dam’s collapse or destruction; taking control of the flow of Euphrates river water from the upstream Jarabulus area; the severing of all Islamic State (IS)’s supply routes from the northeast.

All of these are preliminary steps toward setting up the first US-sponsored autonomous zone in al-Raqqa province.
US forces have meanwhile cut off the road to al-Raqqa from Aleppo to thwart any bid by the Syrian army and its allies to advance on the city and participate in its liberation.

This was part of preparations for the all-out assault that French Defence Minister Jean-Yves Le Drian has said will begin next month.

The Americans and their Western allies want to avoid at all costs having to deal with Russian or Syrian partners in Al-Raqqa.

British and French troops will therefore to deploy Tabaqa to join the US military in entering Islamic State’s capital and thoroughly ‘cleansing’ it with the help of Kurdish forces.
According to Western reports, Trump is already thinking up ways of celebrating this great anticipated victory.

He may even show up personally in the city after its ‘liberation’ if everything proceeds to plan — though we have our doubts about that.
The plan is reportedly for the city to be handed over to the control of local Arab tribes, with former Syrian opposition head Ahmad Al-Jarba expected to be anointed as its ‘leader’.

He is one of the sheikhs of the huge Shummar tribe and has formed a tribal army which has 5,000 fighters.

He could be given a similar role to that of Saudi Prince Khaled bin Sultan, the commander of the Arab forces that were rolled into Kuwait City after Iraqi forces were forced out by American firepower in 1991.
It is premature to judge this plan’s prospects of success or failure – or whether its authors have a clear idea of their longer-term objectives: especially regarding regime-change in Damascus (given the Trump administration’s recent signals that this is no longer a US priority).
Nevertheless, many questions can be raised.

Above all, are Jarba and his militia capable of running this enclave?

Will the other tribes defer to his supposed leadership?

Will the SDF render him this service free of charge and with nothing in return – having sustained heavy casualties in the fight to liberate the city and its hinterland?

And will the qui-pro-quo be the establishment of a Kurdish zone on the Syrian-Turkish border?
History has taught us that whenever US forces enter any Arab or Middle Eastern country they encounter fierce resistance and suffer many casualties as a consequence, even if only after a while.

That is what happened in Beirut in 1982, Mogadishu in 1994, and Baghdad in 2003. We should not expect Syrian cities, and specifically Al-Raqqa, to be an exception.

But it will be no simple matter to turn Al-Raqqa from capital of the Islamic State into the seat of a hybrid self-rule authority as part of a scheme to partition Syria.