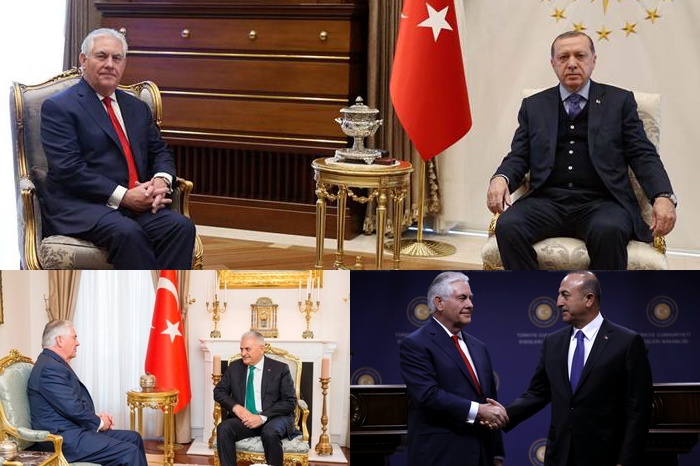 Are we facing an American transformation in Syria?
What is its relation to the Turkish declaration on the end of the «Shield of Euphrates» mission?
How will the Syrian opposition respond?

The situation mixed-up for us, perhaps it mixed-up too with many like us, when we were following up the press conference that was held between, the US Secretary of State Rex Tillerson and his Turkish counterpart Mevlut Cavusoglu in Ankara after intensive and sometimes closed talks with Turkish President Recep Tayyip Erdogan and Prime Minister Ben Ali Yildirim, along with Mr. Cavusoglu, focused on the situation in Syria and the war on terror.

The surprise was, when Tillerson assured that, the Syrian people would determine the future of President Bashar Al-Assad in the long run.

This statement was never uttered by any US official, and was the preserve of the Russian leadership, President Vladimir Putin and the Russian Foreign Minister Sergei Lavrov.

In the past six years of the Syrian crisis, US officials have been demanding that the Syrian regime be overthrown.

They assert that President Assad has no place in the future of Syria.

They provided full military and political support to the Syrian armed opposition.

They monitored hundreds of millions of US dollars to train some of them and finance and arm others.
Friends of the Syrian people.

It is true that the US administration under President Barack Obama changed its strategy and gave priority to fight terrorism and the elimination of the «Islamic State» or «Daesh» in particular, but maintained that there is no role for President Assad in the present or future, accepting his stay in the transitional period only, and with fewer powers.

Do we understand from Tillerson’s remarks that the new US administration has turned 180 degrees on the policies and positions of the previous administration, and approached more to the Russian position, and is preparing to engage the Syrian government in the war on terrorism, and open channels of dialogue, and perhaps coordination with them in this regard?

The importance of these statements made by Tillerson in his first visit to Ankara, comes from the fact that it coincides with two major developments in the Syrian scene:

The first is the beginning of the countdown to the attack on the city of Raqqa, the capital of the «Islamic State».

With the Syrian Democratic forces, be the spearhead of the attack, which is mostly from Kurds, to seize the city’s airport and the Dam.

These forces are supported by an air cover via American air force, with US special forces, approximately 300.

The second: Mr. Yildirim’s announcement yesterday, after an emergency meeting of the Turkish National Security Council, which lasted for hours under his leadership, the end of «Shield of Euphrates» Operation, which began by the Turkish forces and factions of the Free Syrian Army in August last, controlling Jarablus on the borders area, and later on Al-Bab city, getting the «Islamic State» out of them.

What can be learned from these two developments is that the new US administration has chose to stand in the trench of its Kurdish allies, preferring them on Turkey, the founding member of NATO, which explains the Turkish decision to declare the end of «Shield of Euphrates» Operation after achieving its objectives, as it been stated by Mr. Yildirim.

The forces of «Shield of Euphrates» Operation didn’t achieve all their objectives, with Mr. Yildirim allow us to disagree with him on this point, because the aim of its incursion into the Syrian territory and without coordination with Damascus government was to establish a «safe area» of 5,000 square kilometers, and go from Jarablous and Al-Bab towards Manbj, and then go to the city of Raqqa, and finally the roads of Damascus and storming it and overthrowing the Syrian regime, and this is what President Erdogan said by his own mouth, and most of these goals didn’t been done.

We don’t believe that the task of «Shield of Euphrates» has ended completely, and we have not heard of any withdrawal of Turkish troops from Syrian territory.

We don’t rule out that the Turkish leadership decided to set a trap in the region and ignite an ethnic war between factions of the Free Syrian Army and the Kurds, or even the Syrian army itself.

The Turkish withdrawal means practically creating a strategic vacuum that will compete for the Kurds, the Free Army factions, and perhaps the Sham Liberation Organization, or the «Nusra».

This means opening a new fighting front and creating chaos that gives Turkey a strong bargaining chip, to negotiate for a cease-fire and truce.

It may be premature to read this radical shift in the US position in the Syrian crisis, and the conclusion that the Trump administration is about to accept a major role for President Assad in the future of Syria.

The war on terror is about to end in Mosul despite the difficulties that it faces.

The Russian-American coordination in the region is almost frozen, and there is a chronic mistrust of the US administrations, Trump’s administration on its head, but what Tillerson said in the presence of his Turkish hosts is a message of great importance that cannot be ignored and its consequences, with polices changing alongside its reflections.

It’s certain that the Turkish role in the Syrian crisis shrinks in the light of the expansion of the Russian-Iranian alliance.

This is in some respects related to the restoration of Aleppo and Palmyra, with repelling the attack against Damascus, up to the diplomatic war that President Erdogan launched against his European neighbors, with his threats that used the card of the Syria refugees, we must bear in mind that America leads NATO, which is the political, military and strategic umbrella of Christian Europe, and America cannot take Erdogan’s side on the expense of the «old» continent.

The American surprise is great, and we need a lot of time to absorb it, and it’s wise to wait until its dust settles and shows its full look.