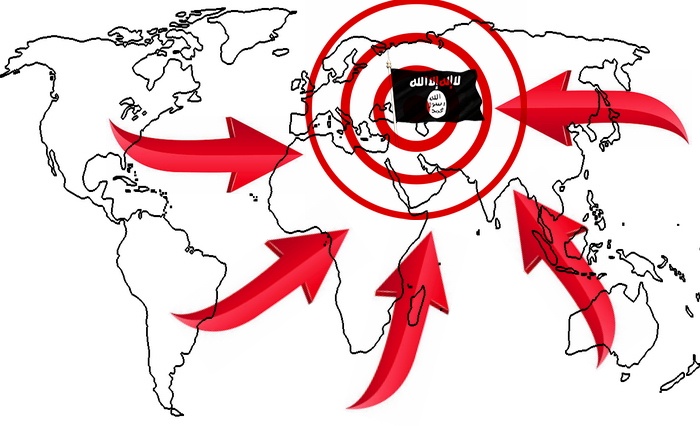 While Washington multiplies the signals confirming its intention to destroy Daesh, the British and the French, followed by the rest of the Europeans, are contemplating going their own way.

London and Paris may have coordinated the attacks on Damascus and Hama in order to force the Syrian Arab Army to move out to defend them, and consequently, to weaken their presence around Raqqa.

The Europeans are hoping to organize the flight of the jihadists towards the Turkish frontier.

The meeting of the anti-Daesh Coalition in Washington, on 22-23 March, went very badly.

Although in appearance, the 68 members reasserted their will to fight this organization, in reality, they only displayed their differences.

US Secretary of State Rex Tillerson reminded the Congress of President Trump’s commitment to destroy Daesh, and no longer simply to reduce it, as the Obama administration had stated.

By doing so, he placed the members of the Coalition before the fait accompli – without discussion.

First problem – how can the Europeans in general, and the British in particular, save their own jihadists, if it’s no longer a question of displacing them, but eliminating them.

Rex Tillerson and the Iraqi Prime Minister, Haider Al-Abadi, gave a report on the battle of Mosul.

Despite their evident satisfaction, it is clear for all military experts that the battle will not be over for several long months. Because in Mosul, almost every family has one of its members engaged in Daesh.

On the military level, the situation in Raqqa is much more simple.

The jihadists there are foreigners, so it is enough to cut their supply lines and then separate them from the Syrian population.

Second problem – the US army must first obtain the authorization from Congress, then from Damascus, in order to deploy in Syrian territory.

Generals James Mattis (Secretary for Defense) and John Dunford (Joint Chief of Staff) have attempted to convince the parliamentary, but they may not prevail.

In that case, they will have to negotiate with Damascus and clarify everything that needs to be clarified.

When asked by the Europeans what Washington intends to do with liberated Raqqa, Rex Tillerson gave this strange answer – that he would bring back the population that had been displaced or had left seeking refuge. The Europeans therefore concluded that since this population is massively favorable to Damascus, Washington intends to give back the territory to the Syrian Arab Republic.

The Portuguese Minister for Foreign Affairs des Affaires, Augusto Santos Silva, then spoke to make the point that this proposition went against everything that had been decided previously.

The Europeans have the moral duty, he stressed, to pursue their efforts to protect the refugees who had fled the «bloody dictatorship».

Even if it were liberated, Raqqa would not be in a safe zone, since the Syrian Arab Army would be worse than Daesh.

The choice by the Europeans to entrust Portugal with this intervention is not impartial.

The Portuguese ex-Prime Minister, of whom Santos Silva was a minister, Antonio Guterres, is the ex-High Commissioner for the Refugees and the current Secretary General of the UNO.

He had also been the President of the Socialist International, an organization entirely under the control of Hillary Clinton and Madeleine Albright.

In short, he is today Jeffrey Feltman’s umbrella at the UNO and also that of the warmongering clan.

Third problem – liberate Raqqa from Daesh, no contest, but, according to the Europeans, not enough to give it back to Damascus. Which leads us to the French overbid.

Immediately, we saw the jihadists from Jobar attack the center of the capital, and those from Hama attack the isolated villages.

Perhaps it was for them a desperate attempt to obtain a consolation prize in Astana or Geneva before the end of the game.

Perhaps it’s a strategy coordinated by London with Paris.

In that case, we may expect a vast operation by the colonial powers in Raqqa.

London and Paris might attack the city before it becomes encircled, in order to force Daesh to displace so as to save it.

Daesh could move back to the Turkish frontier, or even into Turkey itself.

The organization would then become the destroyer of the Kurds for the benefit of Recep Tayyip Erdogan.