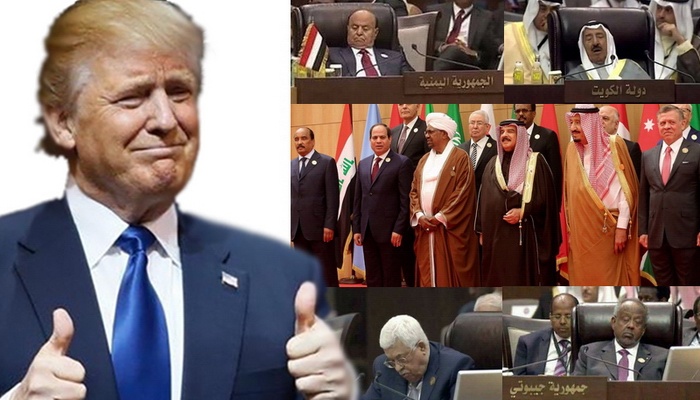 The Arab summit in Jordan is setting the stage for a new Sunni Arab alliance, with Israel in the wings

The speeches made by Arab leaders at their summit conference in Jordan which began on Wednesday left an unmistakable impression: most, if not, all were directed at the administration of the new US president Donald Trump, and were focused on his plans to form a Sunni Arab alliance to confront Iran, which he and his Arab allies view as the threat to the region.

It is no exaggeration to say that the remarkably high turnout of Arab heads of state at the gathering was not only due to the enormous efforts made by their host, the Jordanian monarch, to secure their attendance in person.

It was also intended to line up support and pave the way for the formation of this alliance, in which Jordan can be expected to play an important rule.

Most striking in this regard is the use to which the leaders of Saudi Arabia and Egyptian put the meeting.

Disagreements had intensified between them over the past six months reaching the point of estrangement.

Both were needed a ladder to climb down from the tops of their respective trees, and a neutral venue where they could meet and shake hands without either seeming to offer concessions to the other.

Their participation at the summit provided an appropriate way out.

The magic words were uttered by President Abdelfattah Al Sisi when he used his summit speech to assert that Iran’s growing influence in the region should be forcefully confronted.

This was a message addressed across the hall to the Saudi monarch, and across the continents and oceans to Trump.

The US president, who has strong and growing relations with the Egyptian leader, was waiting for it and may have had prior knowledge of it.

Two earlier developments should be recalled here: During Saudi Deputy Crown Prince Muhammad bin Salman’s recent visit to Washington, Trump urged his Saudi allies to mend fences with Cairo, and as a first step to restore the monthly 700,000 ton Saudi oil grant to Egypt which was suspended six months ago.

Prior to that, in November, Sisi withdrew a draft US Security Council resolution demanding an end to Israeli settlement activities at the request of president-elect Trump.

So we were not surprised by the way the pieces began falling in place after the brief meeting and handshake between the Egyptian president and Saudi monarch.

With the stage having been set in accordance with a carefully prepared script, the Egyptian president’s spokesman announced that he had welcomed an invitation from King Salman to visit Saudi Arabia and a promise by the Saudi monarch to pay a return visit to Egypt.

The Amman summit is serving as the incubator of the new Sunni alliance, and Israel will not be out of the picture.

Indeed, it was a deliberate ploy to put Palestine back at the top of the summit agenda after it was absent (or absented) for the past six years.

The aim was to provide cover for this new Sunni alliance.

It is not unlikely that invitations will soon be issued to a Washington peace conference attended by the alliance’s leaders and their Israeli counterparts, thereby bringing the normalization process out of the closet and presaging future joint Arab-Israeli action on more than one front.

The Iranian threat has been exaggerated out of all proportion and used as a ‘bogeyman’ for reviving or re-constituting the so-called ‘moderate’ Arab camp with the Gulf states and other Arab kingdoms at its core.

It is unclear whether this was why Morocco’s King Muhammad VI failed to attend the summit, or if his surprise absence was due to reasons other than his declared disillusionment with Arab summitry in general. He has always previously stayed well within this camp.

It was also noteworthy that the emir of Kuwaiti, Sheikh Sabah Al-Ahmad, was one of the few leaders to call for dialogue with Iran in order to achieve security and stability, while urging Arab state to rise above their disagreements.

This raises a question: was the Kuwaiti emir aware of what is happening behind closed doors, and did he want to distance himself and his country from such an alliance and spare it the potentially dangerous fallout? He had, after all, received Iranian President Hassan Rowhani only a month ago in his capital.

Previously, he sent his foreign minister to Tehran with a message o the Iranian leadership urging the reduction of tensions and opening of channels of dialogue with the Gulf states.

This mediation initiative had been authorized by Gulf Cooperation Council (GCC) leaders at their summit in Manama.

But the Saudi leadership publicly disowned it after the famous phone call between Trump and King Salman in which they agreed to confront the Iranian threat and establish safe zones in Syria.

Unlike all other Arab summits for at least the past decade, the Amman summit is of real significance.

It is laying the foundations for a new phase in the region.

It is to be immediately be followed by three visits aimed at building on its results, both declared and secret: by the Jordanian monarch to the US to meet with Trump in his capacity as Arab summit chairman, and by Sisi to Washington and then Riyadh to draw up a road map for the new Sunni alliance.