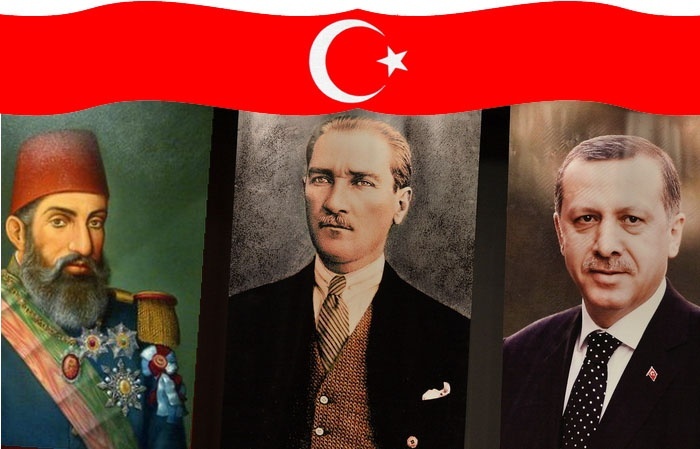 Regrettably, President Erdoğan didn’t realize that today, he’s doing everything that used to happen to him and all the members of the Islamic parties in the past, because today, he’s prosecution and repression and put his opponents in prison.

Press and Media in Turkey

Turkey is now ranked first in the world in preventing and violating freedom of opinion and press, by arresting journalists, according to «Reporters Without Borders».

After the failed coup attempt, more than 80 media outlets in Turkey were shut down, according to a European Commission report and a report by the US Journalist Committee, which reported that more than 100 journalists and media were arrested in 2016 alone.

The subject is more like the return of Turkey to the rule of the Ottoman Empire and return to absolute Ottoman Turkish custom.

According to Erdoğan’s view of the government, the Turkish Republic, with its secular regime founded by Mustafa Kemal, has caused countless problems for the Turkish nation, which it uprooted Turkey off its history, and must be eradicated.

Erdoğan’s goal of implementing these constitutional amendments is to restore state control over life in the country.

In other words, the secular Turkish Republic will not be allowed to celebrate its 100th anniversary.

It’s one of the slogans carried by the supporters of the President.

The Republic of Mustafa Kemal will not reach 2023 and will not complete its 100th anniversary.

The biggest problem remains on the way of President Erdoğan, for the situation to be stabilized, Terrorism or the presence of the Islamic State and the Kurds.

Turkey has witnessed many terrorist attacks and bombings during the past year and the beginning of this year.

Security and intelligence reports shows, the existence of an Islamic State organization sleeper cells within Turkey, in more than 70 province with the presence of more than 8000 Turkish members within the terrorist organization, with the presence of many different radical Islamic movements in Turkey that sympathies and support the organization, which many of them on the side of Erdoğan, which is important element with him that helped to implement his policies.

And with that being said, turning against all those groups, will cause a catastrophic explosion in Turkey and lead to a tragic situation.

The founder was Erdoğan’s comrade, Abdullah Gül, in 2001, with a group of many personalities and known figures in Turkey that all of them were students a former party member of Necmettin Erbakan.

Today, with everything is in Erdoğan’s hands, with all the leaders of the first ranks of the party’s founders have been removed from the picture and it is almost certain that Erdoğan will use the charge of dealing or subordination to Fethullah Gülen, against anyone who opposes him or criticizes his policies and his rule.

The dispute between Gül and Erdoğan was in many topics, including the Syrian issue, while Abdullah Gül wasn’t convinced of the way that Turkey is dealing with the Syrian Issue, therefore he didn’t support the policy of Erdoğan towards Syria in the first five years of the crisis.

As a result of that, and as soon as the presdncy tem of Abdullah Gül as a president of Turkey ends, he was completely vanshed from the political picture.

As for Ahmet Davutoğlu, who is considered the first instructor of the Justice and Development Party, which he believed in the theory of history repeating itself, so that Turkey’s returning to its roots is an essential issue.

Thus, the way this state will be achieved through Islam and through the control and success of the Islamic parties, to govern in the Arab countries as important and influential as in Tunisia, Egypt and Libya and to work to achieve the same thing in Iraq and Syria as well.

This was the first mistake that Mr. Abdullah Gül, rejected and has problem with it, by taking Turkey through this path to deal with its neighbors in the region after the so-called Arab Spring.

There is a possibility that Ahmet Davutoğlu might exacerbate the dispute between Gül and Erdoğan at one point, in order, for him to take Erdoğan’s side.

So, he was promoted to be the leader of the party and became the Prime Minister, after Erdoğan himself elected president, and as it mentioned Abdullah Gül, stepped out of the general landscape in the country.

But the problem is that, Ahmet Davutoğlu didn’t seem to understand Erdoğan’s ambition, which was aimed at taking full control of aspects in Turkey without giving any powers to anyone else.

This is one of the main reasons why Ahmet Davutoğlu and President Recep Tayyip Erdoğan disagreed, when Ahmet Davutoğlu as head of government at that time, he was acting on the basis of the Turkish constitution so that the Prime Minister is the authority and therefore, he was acting and dealing with all regional and international issues and in particular the European issue without reference to Erdoğan, which didn’t looks a good thing for President Erdoğan and doesn’t fit with what is going on His mind and convictions.

And When, President Erdoğan, start talking about his plans to make change in the political system in Turkey, which is the issue that Davutoğlu, didn’t seems to look in favor of.

With the changes in the political situation, especially with the incident of shooting down the Russian aircraft, which due to the status of constitutional powers, Ahmet Davutoğlu is the one who gave the order to shoot down the aircraft, or at least that’s what President Erdoğan said, therefore Erdoğan didn’t find it embarrassing to take out Davutoğlu and remove him from Power as Prime Minister and the leader of the party, with loading him all the «mistakes» or wrong political policies that Turkey took and made in this past several years.

The End of Part 4